Over the past 20 years, chronic wasting disease (CWD) in Wyoming has been spreading slowly outward from the southeastern corner of the state toward the Greater Yellowstone Area and Wyoming's elk feed grounds, where more than 24,000 elk are supplementally fed each winter.

Recently, the disease was detected in mule deer and elk around the supplemental feeding grounds and Grand Teton National Park-- setting off renewed concern about the impact of CWD in the Greater Yellowstone Ecosystem (GYE). These feed grounds facilitate dense aggregations of elk during the feeding season, and it is these high elk densities that may put feed ground elk at greater risk of CWD spread and subsequent declines in survival and population growth. Studies show that CWD prevalence tends to be higher in mule deer than elk and Wyoming surveillance data suggest that CWD in mule deer is more widely distributed across the state.

Management strategies to control and slow the spread of CWD into non-endemic areas rely in part on limiting higher prevalence “hotspots” which may center around limited resources that increase wildlife host densities. Agricultural mineral tubs and salt licks have been observed to be visited by deer and other cervids and may serve as a fomite for CWD transmission. This can occur by animals successively visiting and licking a tub or block or licking the salt that leaches into the ground around these sites. Elemental additives to salt such as copper and manganese may have the added effect of increasing the longevity and transmission potential of CWD prions (Nichols et al, 2016). Our goal is to determine how important anthropogenic mineral licks are to the transmission of CWD.

Predators have been hypothesized as a potential disease sanitizing agent by selectively removing infected prey. This idea has been developed theoretically and has been demonstrated in other field systems. For CWD, however, there is only one modeling study of the potential effects of predation and one study of cougar predation on mule deer. Several questions remain, and replication in other regions is needed.

We hope to understand if predation by mountain lions is related to overall population prevalence of CWD in mule deer, and if predation of infected deer is disproportionate to availability.

3. Estimating the effects of artificial feeding at the National Elk Refuge on elk contact rates

In November 2018 chronic wasting disease (CWD) was detected for the first time in Teton County, Wyoming, in the heart of the globally-significant Greater Yellowstone Ecosystem (GYE). The detection occurred in a mule deer in Grand Teton National Park (GRTE) near the northern boundary of the National Elk Refuge (NER). Elk that winter on the NER are managed under the USFWS Bison and Elk Management Plan, in collaboration with the Wyoming Game & Fish Department (WYGFD). NER elk densities greatly exceed levels predicted to result in rapid population declines with the introduction of CWD. NER management options that influence animal aggregation and distribution include feeding and hunting.  We are quantifying elk contact patterns on the NER and the role of supplemental feeding in modifying potential CWD transmission. We are also developing methods to more cost-effectively estimate elk densities using tools including satellite imagery and unmanned aerial systems and to evaluate the success of adaptive management in changing densities and degree of concentrations of elk. For more information on developing tools to evaluate chronic wasting disease transmission risk, click here.

4. Modeling the role of predation in CWD dynamics

The combined effects of wolves and cougars on CWD in the Rocky Mountain West will not be empirically estimable for decades given that CWD is slow to develop, and only recently did the CWD distribution begin to overlap with areas containing suites of predators. Additionally, managers lack timely indicators of CWD presence in host populations. We currently rely on the non-invasive sampling of wolf-killed, cougar-killed, and road-killed cervids, as well as harvested elk and deer to monitor for CWD in Yellowstone and Grand Teton National Parks and Wyoming. This method of collection produces small sample sizes and needs to be supplemented with wider geographic sampling and alternative approaches. We propose to simulate the potential role of different predators and identify key indicators of CWD invasion in elk and deer in the Greater Yellowstone.

Male deer and elk are often found to have higher prevalence of CWD than females.  There are multiple mechanisms that may drive this observed pattern. Female to transmission to males may be high due to male mating behaviors. In this case, males are being exposed at higher rates resulting in higher prevalence, but are not necessarily the most responsible for transmission.  This has potential management implications for the efficacy of male-biased harvest. In this project we explore the consequences of different harvest management regimes under different transmission scenarios between male and female deer using age-structured disease models.

Previous CWD work tends to focus on adult survival and reproduction. We are interested in intergenerational effects of CWD. So, we are following mothers of known CWD status as well as their fawns to understand multiple maternal effects.  How does a mother’s CWD status affect fawn condition and survival? How do dispersal rates and distances of fawns differ depending on the CWD status of the mother? How much more likely are fawns of CWD positive mothers to become CWD positive?

Our past work on CWD focused on modeling efforts to understand how a persistent environmental reservoir may affect long-term disease dynamics and population dynamics of deer and elk. In addition, we worked on assessing mule deer connectivity around Montana by contributing to collaring efforts as well as using genetic methods. 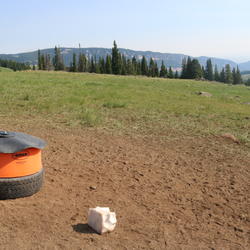 Chronic wasting disease (CWD) is a fatal disease of deer, elk, and moose and has been spreading in North America for the past two decades. The disease is spread by infected body fluids. Animals can become infected by coming into direct contact with a CWD-infected animal, or an infected animal can leave behind fluids (e.g., saliva, urine) that an uninfected animal will come into contact later...
By
Ecosystems, Biological Threats and Invasive Species Research Program, Northern Rocky Mountain Science Center
link
September 16, 2021

Chronic wasting disease (CWD) is a fatal disease of deer, elk, and moose and has been spreading in North America for the past two decades. The disease is spread by infected body fluids. Animals can become infected by coming into direct contact with a CWD-infected animal, or an infected animal can leave behind fluids (e.g., saliva, urine) that an uninfected animal will come into contact later...
Learn More
link 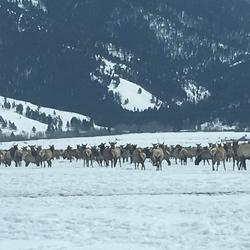 Chronic Wasting Disease (CWD) infects and kills ungulates (deer, elk, moose), and has been spreading across North America for the past 20 years. Some ungulate populations have declined because of CWD and there are no viable vaccines or treatments for this disease. Therefore, tools that assist wildlife managers in preventing and mitigating CWD can be powerful assets in protecting our nation’s big...
By
Ecosystems, Biological Threats and Invasive Species Research Program, Northern Rocky Mountain Science Center
link
September 1, 2021

Chronic Wasting Disease (CWD) infects and kills ungulates (deer, elk, moose), and has been spreading across North America for the past 20 years. Some ungulate populations have declined because of CWD and there are no viable vaccines or treatments for this disease. Therefore, tools that assist wildlife managers in preventing and mitigating CWD can be powerful assets in protecting our nation’s big...
Learn More

Novel approaches to quantifying density and distributions could help biologists adaptively manage wildlife populations, particularly if methods are accurate, consistent, cost-effective, rapid, and sensitive to change. Such approaches may also improve research on interactions between density and processes of interest, such as disease transmission across multiple populations. We assess how satellite
By
Ecosystems, Northern Rocky Mountain Science Center
January 25, 2021

Wildlife aggregation patterns can influence disease transmission. However, limited research evaluates the influence of anthropogenic and natural factors on aggregation. Many managers would like to reduce wildlife contact rates, driven by aggregation, to limit disease transmission. We develop a novel analytical framework to quantify how management activities such as supplemental feeding and hunting
By
Ecosystems, Northern Rocky Mountain Science Center
May 11, 2018

Habitat quality plays an important role in the dynamics and stability of wildlife metapopulations. However, the benefits of high-quality habitat may be modulated by the presence of an environmentally persistent pathogen. In some cases, the presence of environmental pathogen reservoirs on high-quality habitat may lead to the creation of ecological traps, wherein host individuals preferentially colo
By
Ecosystems, Northern Rocky Mountain Science Center
September 14, 2015

This e-book is the product of a second workshop that was funded and promoted by the United States Geological Survey to enhance cooperation between states for the management of chronic wasting disease (CWD). The first workshop addressed issues surrounding the statistical design and collection of surveillance data for CWD. The second workshop, from which this document arose, followed logically from
By
Ecosystems, Northern Rocky Mountain Science Center
August 27, 2015

To better understand the future spread of chronic wasting disease, we conducted a genetic assessment of mule deer Odocoileus hemionus population structure across the state of Montana, USA. Individual based analyses were used to test for population structure in the absence of a priori designations of population membership across the sampling area. Samples from the states of Wyoming, Colorado and Ut
By
Ecosystems, Northern Rocky Mountain Science Center
January 1, 2011

Chronic wasting disease (CWD) is a fatal disease of deer, elk, and moose transmitted through direct, animal-to-animal contact, and indirectly, via environmental contamination. Considerable attention has been paid to modeling direct transmission, but despite the fact that CWD prions can remain infectious in the environment for years, relatively little information exists about the potential effects
By
Ecosystems, Contaminant Biology, Environmental Health Program, Northern Rocky Mountain Science Center