Preliminary simulation of the tsunami from the September 8, 2017 M=8.1 intermediate-depth earthquake offshore of Chiapas, Mexico

A magnitude 8.1 earthquake struck offshore of the state of Chiapas, Mexico, at 4:49 a.m. UTC on September 8 (11:49 p.m. on September 7 local time). The largest earthquake ever recorded along Mexico’s southern coast, it caused extensive damage and dozens of deaths. It also triggered a tsunami in the Gulf of Tehuantepec, with maximum wave heights measuring 1.01 meter (3.3 feet) at Salina Cruz and 1.76 meters (5.8 feet) at Puerto Chiapas.

Why Wasn’t the Tsunami Bigger?

Most of the world’s tsunamis are generated by earthquakes on large faults, called “megathrusts,” along which an oceanic plate moves beneath a continental plate. Such a fault exists off southern Mexico, where the oceanic Cocos plate dives beneath the North American plate, but the break that produced the Chiapas earthquake actually happened below that megathrust, on a fault entirely within the diving Cocos plate. It occurred on a “normal” fault, along which one block of rock slid down and away from the other, at a depth of nearly 70 kilometers (more than 40 miles) below the Earth’s surface. That’s deeper than the quake that triggered the 2011 tsunami in Japan, which began with a break along the megathrust 29 kilometers (18 miles) below the surface. Because the Chiapas fault break was relatively deep, not much vertical movement was transferred up to the seafloor and from there to the overlying water. Hence the tsunami was mild—a lucky thing for coastal communities already coping with deadly shaking.

Read more detail about this event in the Sound Waves newsletter article, “A Tale of Two Tsunamis—Why Weren’t They Bigger? Mexico 2017 and Alaska 2018.”

Learn more about the influence of earthquake location on tsunamis in the USGS Sound Waves newsletter article, third figure.

The program used to create these simulations does not model nonlinear and breaking effects as waves travel into shallow water. Wave heights have been exaggerated to make details easier to see. 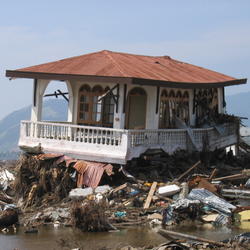 Basic research to develop the geologic record of paleotsunamis and improve the ability to interpret that record is needed to mitigate tsunami risk in the U.S.
Learn More
link

A collection of computer simulations of significant tsunamis.
Learn More