In the western United States (U.S.), there are many regionally restricted, rare species resulting from complex demographic and ecological processes through time. In addition to the inherent risks associated with being rare (i.e., having few individuals spread over a limited area that could be disproportionately affected by chance events), anthropogenic disturbances are increasing in magnitude across the region (e.g., energy extraction activities, recreation, livestock, invasive species). These disturbances can threaten the continued persistence of rare species by diminishing habitat, altering ecosystem properties, and changing the climate. Thus, the need to document the historical and contemporary properties of and project the future impacts on rare species is critical. Examples of Genetics for Western Restoration and Conservation (GWRC) group research that facilitates the conservation of species across the western U.S. are highlighted below.

Graham’s beardtongue (Penstemon grahamii) is a narrowly endemic flowering plant distributed across the Green River geologic formation in the Uinta Basin, Utah. The Green River formation is also an important substrate indicating deposits of energy resources, and development for extraction activities is a common land disturbance. We performed high throughput DNA sequencing to 1) examine population genetic structure across the species’ range and 2) estimate how genetic diversity and rates of gene flow are influenced by various landscape features (e.g., climate, soil, and habitat disturbance). Knowledge of these biological processes may help managers prioritize the protection of important areas of the species’ range to support its continued persistence.

Milkvetches (i.e., plants in the genus Astragalus) comprise the most diverse genus of flowering plants in the world, and many endemic and rare milkvetch species are distributed across the western U.S. A clade of two of these species—Astragalus sabulosus (composed of varieties sabulosus and vehiculus) and A. iselyi—occupies a narrow distribution in southeastern Utah. The distributions of these species and varieties do not overlap, yet they share morphological characteristics that suggest close evolutionary relationships. Given their limited distributions, small population sizes, and impending listing decisions under the U.S. Endangered Species Act, we used genomic data to determine: 1) the rate of gene flow among these taxa; 2) how long they have been isolated from one another; 3) how much genetic diversity is present across each taxon’s range; 4) if signatures of inbreeding depression exist; and 4) whether taxa harbor unique, adaptive genetic variation.

This rare sedge grows where water trickles out of Navajo sandstone and is found in “hanging gardens” on the Navajo Nation in Arizona and Utah. Given this restricted, often disconnected habitat, it is unknown how gene flow affects the genetic identity of plants, and thus how the plant should be managed to protect patterns of genetic diversity.

Arizona willow has few, widely scattered populations across Arizona, New Mexico, Colorado, and Utah. Not only do these geographic distances make it unlikely that gene flow occurs among populations, but the populations persist across a range of environmental conditions, suggesting the possibility of local adaptation. In addition, gene flow may occur with closely related species, necessitating a genomic perspective to inform appropriate management actions.

Pagosa skyrocket persists in two close but disconnected locations in southwestern Colorado. One location has hundreds of thousands of individuals, while the other only has hundreds. Given that the travel distance of known pollinators is not expected to be far enough to facilitate pollination between the two locations, it is unknown how genetically differentiated the populations are or if the smaller population is genetically healthy (i.e., retains sufficient genetic diversity and has low levels of inbreeding).

The endangered Arizona cliffrose is known from four populations across central Arizona. However, previous research suggested that of these four populations, one was a distinct species, Purshia pinkavae, while the remaining three resulted from hybridization events (P. pinkavae x P. stansburiana). While these analyses were informative for the management of P. subintegra, they raised additional questions that need to be addressed before appropriate management actions can be determined. Outstanding questions revolve around the timing of hybridization events that led to the creation of three of the P. subintegra populations, the ongoing nature of gene flow between P. subintegra and P. stansburiana where their ranges overlap, and relationships among P. subintegra, P. stansburiana, and other regional taxa in the genus. 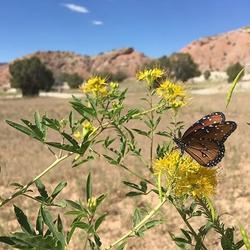 Research using genetic principles, methods, and data provides critical information for restoration and conservation science. Genetic research may rely only upon genomic sequencing techniques, which generate abundant, genome-wide DNA sequences that can provide a glimpse into a species’ evolutionary history and adaptations. Genetic research may also look at an organism’s physical traits to...
By
Ecosystems, Southwest Biological Science Center
link
May 28, 2020

Research using genetic principles, methods, and data provides critical information for restoration and conservation science. Genetic research may rely only upon genomic sequencing techniques, which generate abundant, genome-wide DNA sequences that can provide a glimpse into a species’ evolutionary history and adaptations. Genetic research may also look at an organism’s physical traits to...
Learn More
link 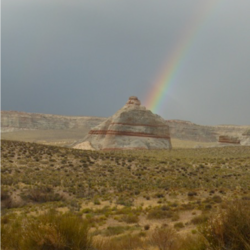 As restoration needs for natural landscapes grow due to higher frequency and/or intensity disturbances, pressure from invasive species, and impacts resulting from changing climates, considerable time and resources are being invested to guide the development and deployment of native plant materials (NPMs). Across lower elevations of the Colorado Plateau, a region composed primarily of public land...
By
Ecosystems, Southwest Biological Science Center
link
September 27, 2019

As restoration needs for natural landscapes grow due to higher frequency and/or intensity disturbances, pressure from invasive species, and impacts resulting from changing climates, considerable time and resources are being invested to guide the development and deployment of native plant materials (NPMs). Across lower elevations of the Colorado Plateau, a region composed primarily of public land...
Learn More

Data for the research can be accessed by following the links below.

These data were compiled to support effective conservation for species within Astragalus sect. Humillimi. Two species, A. cremnophylax var. cremnophylax and A. humillimus are federally listed as endangered taxa. The data provided herein were used to resolve the relationaships among taxa, the population structure within taxa, and genetic diversity within taxa. The data are provided in a STRUCTURE-f
By
Southwest Biological Science Center

Journal articles for genomic research supporting western conservation can be found at the links below.

Functional connectivity (i.e., the movement of individuals across a landscape) is essential for the maintenance of genetic variation and persistence of rare species. However, illuminating the processes influencing functional connectivity and ultimately translating this knowledge into management practice remains a fundamental challenge. Here, we combine various population structure analyses with pa
By
Ecosystems, Southwest Biological Science Center
May 6, 2021

AimEvolutionary radiations are central to the origin and maintenance of biodiversity, yet we rarely understand how they are jointly shaped by demography and ecological opportunity. Astragalus is the largest plant genus in the world and is disproportionately comprised of rare species restricted to narrow geographic and ecological regions. Here, we explored the demographic and ecological mechanisms
By
Ecosystems, Southwest Biological Science Center
January 2, 2021

Co‐distributed species may exhibit similar phylogeographic patterns due to shared environmental factors or discordant patterns attributed to the influence of species‐specific traits. Although either concordant or discordant patterns could occur due to chance, stark differences in key traits (e.g., dispersal ability) may readily explain differences between species. Multiple species’ attributes may
By
Ecosystems, Southwest Biological Science Center
September 24, 2018

Premise of the StudyAstragalus sect. Humillimi is distributed across the southwestern United States and contains two endangered taxa, A. cremnophylax var. cremnophylax and A. humillimus. The former was originally described from the South Rim of the Grand Canyon. Analysis of individuals discovered on the North Rim of the Grand Canyon yielded some evidence that the population represented a distinct
By
Ecosystems, Southwest Biological Science Center

This research is supported by many partners.