Coral reefs around the world have suffered ecosystem decline over the past fifty years, particularly in the western Atlantic (Kuffner and Toth, 2016). Scientific consensus is that the most impactful stressors directly causing coral mortality are (in order of acreage of coral killed): coral bleaching caused by high ocean temperatures, coral diseases, and coral predators. Stressors that can prevent coral populations from recovering after a mortality event are more varied, since their influence is often indirect and complicated by multiple stressors acting at once. Among them are disturbances to food webs (e.g., overfishing of herbivorous fish), eutrophication (e.g., fertilizers applied to land arriving in the ocean), and changes in water quality induced by land-use change (e.g., sedimentation). Another stressor relevant to reefs is "ocean acidification." This term refers to the chemical changes that occur in the ocean when it absorbs carbon dioxide derived from humans burning fossil fuels. The average ocean pH at the surface has already declined by about 0.1 pH units. While ocean acidification does not directly cause corals to die, some species show slower growth rates at lower pH (Jokiel and others, 2008). Another expected impact from ocean acidification to reefs is that erosion (the natural processes of breaking down reef structure) will increase; thereby further compromising the important role of reefs in shoreline protection.

As coral populations fluctuate in response to changing ocean conditions, reef managers need new metrics to track the status of coral reefs. Traditional reef monitoring programs are usually limited to measuring the area of reef covered by live corals and other organisms. The USGS is developing new tools and approaches (fig. 1) to directly measure reef processes, including calcification—the process by which organisms produce their calcium-carbonate skeletons. We are directly measuring calcification rates of corals and calcifying algae as they grow in their natural habitat on the outer reef tract of the Florida Keys (fig.2). This new approach to reef-process monitoring has already revealed that different coral species and populations respond differently to various environmental conditions (Kuffner and others, 2013), highlighting the complexity of the response and providing hope that some species may be ideal candidates for conservation and restoration efforts. Measuring calcification rates in a systematic way also provides key baseline data that can be used to quantify impacts to corals in the event of unforeseen events, such as oil spills or other water-quality crises.

Our present work focuses on a very important and threatened species, the Elkhorn Coral (Acropora palmata). Until the 1970s, this coral was a huge contributor to building reef structure throughout Florida and the Caribbean, particularly the reef-crest habitat that attenuates waves and protects coastlines. We are presently testing five genetic strains of Elkhorn from our collaborators at the Coral Reef Foundation for their growth capacity at our calcification monitoring sites. Our work showing which genetic strains grow best in what environments will directly benefit stakeholder efforts in replenishing this important species to western Atlantic reefs, and thereby help restore the critical ecosystem service of coastline protection from storms.

This research is part of the Coral Reef Ecosystem Studies (CREST) project.

This research is part of the Coral Reef Ecosystem Studies (CREST) project. That project and other releated tasks are listed below. 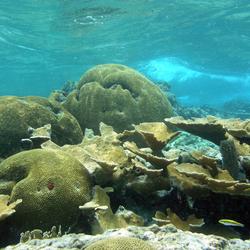 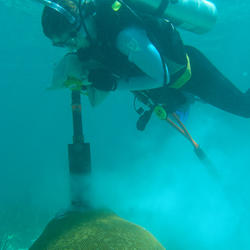 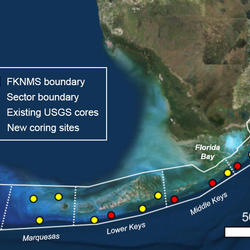 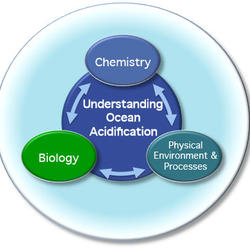 Synchronized field work focused on geochemistry, geology, and metabolic processes overlaid on a habitat map of an entire reef to produce a synoptic overview of reef processes that contribute to carbonate precipitation and dissolution.
Learn More

Staghorn coral, Acropora cervicornis, is a threatened species and the primary focus of western Atlantic reef restoration efforts to date. We compared linear extension, calcification rate, and skeletal density of nursery-raised A. cervicornis branches reared for 6 months either on blocks attached to substratum or hanging from PVC trees in the water column. We demonstrate that branches grown on the
By
Coastal and Marine Hazards and Resources Program, St. Petersburg Coastal and Marine Science Center
January 23, 2017

Massive corals provide a useful archive of environmental variability, but careful testing of geochemical proxies in corals is necessary to validate the relationship between each proxy and environmental parameter throughout the full range of conditions experienced by the recording organisms. Here we use samples from a coral-growth study to test the hypothesis that Sr/Ca in the coral Siderastrea sid
By
Coastal and Marine Hazards and Resources Program, St. Petersburg Coastal and Marine Science Center
April 29, 2016

Continuing coral-reef degradation in the western Atlantic is resulting in loss of ecological and geologic functions of reefs. With the goal of assisting resource managers and stewards of reefs in setting and measuring progress toward realistic goals for coral-reef conservation and restoration, we examined reef degradation in this region from a geological perspective. The importance of ecosystem se
By
Coastal and Marine Hazards and Resources Program, St. Petersburg Coastal and Marine Science Center
July 30, 2013

The potential effect of global climate change on calcifying marine organisms, such as scleractinian (reef-building) corals, is becoming increasingly evident. Understanding the process of coral calcification and establishing baseline calcification rates are necessary to detect future changes in growth resulting from climate change or other stressors. Here we describe the methods used to establish a
By
St. Petersburg Coastal and Marine Science Center
July 11, 2013

Coral reefs are degrading on a global scale, and rates of reef-organism calcification are predicted to decline due to ocean warming and acidification. Systematic measurements of calcification over space and time are necessary to detect change resulting from environmental stressors. We established a network of calcification monitoring stations at four managed reefs along the outer Florida Keys Reef
By
Coastal and Marine Hazards and Resources Program, St. Petersburg Coastal and Marine Science Center
April 21, 2013

Strontium-to-calcium ratios (Sr/Ca) were measured on the skeletal matrix of a core sample from a colony of the massive coral Siderastrea siderea collected in Coral Bay, St. John, U.S. Virgin Islands. Strontium and calcium are incorporated into the coral skeleton during the precipitation of aragonite by the coral polyps and their ratio is highly temperature dependent. The robustness of this tempera
By
St. Petersburg Coastal and Marine Science Center
July 19, 2012

No abstract available.
By
St. Petersburg Coastal and Marine Science Center
May 28, 2012

Coral calcification in a changing ocean

Animals and plants that live in the ocean form skeletons and other hard parts by combining calcium ions and carbonate ions to create calcium carbonate. This process is called calcification. In tropical and subtropical oceans, the calcification of corals and other organisms creates reefs that protect islands, produce beautiful white-sand beaches, and create habitat for thousands of species that liv
By
St. Petersburg Coastal and Marine Science Center
September 28, 2010

Net Loss of CaCO3 from a subtropical calcifying community due to seawater acidification: Mesocosm-scale experimental evidence

Acidification of seawater owing to oceanic uptake of atmospheric CO 2 originating from human activities such as burning of fossil fuels and land-use changes has raised serious concerns regarding its adverse effects on corals and calcifying communities. Here we demonstrate a net loss of calcium carbonate (CaCO3) material as a result of decreased calcification and increased carbonate dissolution fro

Late-summer water temperatures near the Florida Keys were warmer by nearly 2 degrees Fahrenheit in the last several decades compared to a century...