As part of the National Water-Quality Program, the capabilities of SPARROW were expanded to include streamflow and suspended sediment. Updated SPARROW models were developed using nutrient input data from management practices similar to 2012. These models were developed using smaller catchments (average of 2 square kilometer catchments) to enable improved spatial descriptions of nutrient and sediment sources. The models were calibrated using streamflow and total phosphorus, total nitrogen, and suspended sediment loads from sites throughout the Midwest. These four models are described in U.S. Geological Survey Scientific Investigation Report 2019-511.

SPARROW simulated incremental nitrogen yields from the Midwest part of the United States. Results from all four models can be obtained with a SPARROW Mapper (link the figure and  Mapper to: https://sparrow.wim.usgs.gov/sparrow-midwest-2012/ ).

The Great Lakes, Ohio, Upper Mississippi and Red River Basins (MRB3; Upper Midwest) SPARROW models were based on 2002 nutrient-input data and included watersheds that deliver nitrogen and phosphorus to the Great Lakes (published in the Journal of the American Water Resources Association in 2011) and Upper Mississippi and Ohio River Basins.
The 2002 MRB3 models indicated:

SPARROW models have been developed for the entire binational Great Lakes, Lake of the Woods basin.  See the Binational SPARROW modeling page.

SPARROW models have been developed for many other areas of the U.S. and other countries. See the National SPARROW web page. 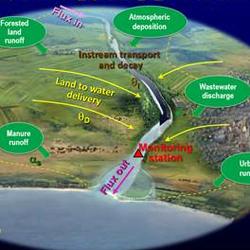 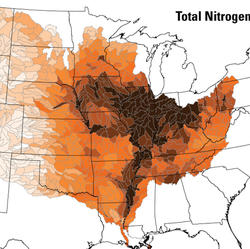 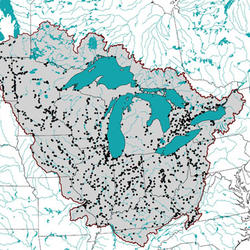 SPARROW phosphorus and nitrogen models are being developed for the entire Great Lakes Basin and the Upper Midwest part of the U.S., and the Red and Assiniboine River Basin, as part of a Binational project between the USGS and the International Joint Commission (IJC) and National Research Council (NRC) of Canada.
By
Upper Midwest Water Science Center
link
March 6, 2019

SPARROW phosphorus and nitrogen models are being developed for the entire Great Lakes Basin and the Upper Midwest part of the U.S., and the Red and Assiniboine River Basin, as part of a Binational project between the USGS and the International Joint Commission (IJC) and National Research Council (NRC) of Canada.
Learn More

Nitrogen and phosphorus sources and delivery from the Mississippi/Atchafalaya River Basin: An update using 2012 SPARROW models

Nitrogen (N) and phosphorus (P) inputs throughout the Mississippi/Atchafalaya River Basin (MARB) have been linked to the Gulf of Mexico hypoxia and water‐quality problems throughout the MARB. To describe N and P loading throughout the MARB, SPAtially Referenced Regression On Watershed attributes (SPARROW) models were previously developed based on nutrient inputs and management similar to 1992 and
By
Upper Midwest Water Science Center
February 4, 2020

Spatially referenced models of streamflow and nitrogen, phosphorus, and suspended-sediment loads in streams of the midwestern United States

Estimates of long-term mean daily streamflow and annual nutrient and suspended-sediment loads considered for use in regional SPARROW models of the Conterminous United States, 2012 base year

Phosphorus (P) loading to the Great Lakes has caused various types of eutrophication problems. Future climatic changes may modify this loading because climatic models project changes in future meteorological conditions, especially for the key hydrologic driver — precipitation. Therefore, the goal of this study is to project how P loading may change from the range of projected climatic changes. To
By
Water Resources, Upper Midwest Environmental Sciences Center, Upper Midwest Water Science Center
June 19, 2014

Nitrogen (N) and phosphorus (P) loading from the Mississippi/Atchafalaya River Basin (MARB) has been linked to hypoxia in the Gulf of Mexico. With geospatial datasets for 2002, including inputs from wastewater treatment plants (WWTPs), and monitored loads throughout the MARB, SPAtially Referenced Regression On Watershed attributes (SPARROW) watershed models were constructed specifically for the MA
By
Water Resources, Upper Midwest Environmental Sciences Center, Upper Midwest Water Science Center
April 10, 2014

Nutrient input to the Laurentian Great Lakes continues to cause problems with eutrophication. To reduce the extent and severity of these problems, target nutrient loads were established and Total Maximum Daily Loads are being developed for many tributaries. Without detailed loading information it is difficult to determine if the targets are being met and how to prioritize rehabilitation efforts. T
By
Water Resources, Upper Midwest Environmental Sciences Center, Upper Midwest Water Science Center

2012 SPARROW (SPAtially Referenced Regressions On Watershed attributes) interactive mappers are available for 5 regions of the conterminous U.S. These mappers simulate river streamflow, and nutrient and sediment loads and yields, that would occur under long-term average hydrologic conditions for the time period 1999 through 2014, and source inputs that occurred during or near 2012.