In 2014, the U.S. Geological Survey partnered with the Hampton Roads Sanitation District (HRSD) in cooperation with the Hampton Roads Planning District Commission to implement a water-quality monitoring program with the goals of (1) collecting high quality nutrient and sediment data representative of the Coastal Plain, (2) computing loads that can be compared to those developed for the Chesapeake Bay TMDL, and (3) better informing local stormwater management decisions by enhancing understanding of the transport characteristics and loading rates of nutrients and total suspended solids delivered to Chesapeake Bay from these urban landscapes.

This long-term monitoring program consists of a network of 12 water-quality monitoring stations, 2 per jurisdiction, across the cities of Newport News, Hampton, Portsmouth, Chesapeake, Norfolk, and Virginia Beach. These stations monitor relatively small watersheds, ranging in area from 30 to 300 acres, with a predominant land use in one of three categories—single family residential, high density residential, and commercial/light industrial.

The Virginia Coastal Plain, in which the Hampton Roads region is located, is defined by low elevation and topographic relief, which when combined with urban development, result in a unique ecological and hydrological environment.  In recent years, quantification of, and regulations pertaining to, suspended solids and nutrient contributions to Chesapeake Bay have been based on monitoring conducted in areas largely outside the Coastal Plain Physiographic Province. It is unknown, however, whether the results of these monitoring programs represent the predominantly urban Hampton Roads region of the Coastal Plain.

The region’s flat topographic relief results in meandering rivers and streams that ultimately flow into tidal estuaries.  Undisturbed, these environments can act as buffers between uplands and receiving waters, such as Chesapeake Bay.  Theoretically, the slow moving waters do not have the energy required to transport large quantities of suspended solids, such as sediment, and could provide ample residence time for organisms to consume nutrients, such as nitrogen and phosphorus, that may be washed in by upland runoff.

Urbanization in the region has led to increased imperviousness (roads, sidewalks, parking lots, rooftops) and compacted soils that prevent rainwater from infiltrating into the ground. Because of urbanization, rainfall rapidly collects on the land surface and runs off into receiving waters, potentially creating the energy needed to mobilize greater amounts of particulate materials and reducing the residence time available for ecological removal of nutrients. During storms, the rapid accumulation of rainfall on impervious land surfaces, combined with the regions flat topography, produces the potential for flooding. To manage runoff from impervious areas, the region is underlain with an extensive network of storm sewers designed to collect and export stormwater runoff. Although these systems provide an efficient means to transport stormwater, they also promote rapid transport of contaminants from the landscape to receiving waterbodies. Once in receiving waters, suspended solids can degrade the aquatic environment by reducing both habitat and light availability, which are essential to aquatic organisms. In addition, the overabundance of nutrients in receiving waters can promote unsustainable algal growth that depletes oxygen required by aquatic life.

This long-term monitoring program consists of a network of 12 water-quality monitoring stations, 2 per jurisdiction, across the cities of Newport News, Hampton, Portsmouth, Chesapeake, Norfolk, and Virginia Beach. These stations monitor relatively small watersheds, ranging in area from 30 to 300 acres, with a predominant land use in one of three categories—single family residential, high density residential, and commercial/light industrial. At each station, a data logger, satellite transmitter, and refrigerated automated sampler are housed in a rugged enclosure located alongside or above the stormwater conveyance. These instruments collect data continuously, including flow rate, water temperature, specific conductance, and turbidity; the data are automatically uploaded to the USGS online database (http://waterdata.usgs.gov/nwis). Additionally, water samples are collected by the automated sampler during stormflow events and retrieved for analysis of total suspended solids and nutrients by HRSD laboratory staff. Data from these stations are publicly available in near real time (new data posted hourly) via the Hampton Roads Regional Water Quality Program website.

Operate a water-resources monitoring network within the Coastal Plain to describe surface-water quantity and quality of urban stormwater in watersheds of varying land-use and density. The data collection is designed to address the following objectives:

The approach for satisfying the first objective includes operating twelve intensive water-resources monitoring stations - two in each of the six partner jurisdictions. Each water-resources monitoring station includes a continuous-record (continuous record = data collected every 5 minutes) stream gage, continuous-record water-quality monitor (measuring water temperature, specific conductance, and turbidity), and an automatic stream-water sampler for the collection of stormflow samples. Water-quality sampling (for nutrients and suspended sediment) is conducted during stormflow events to support the calculation of loads. 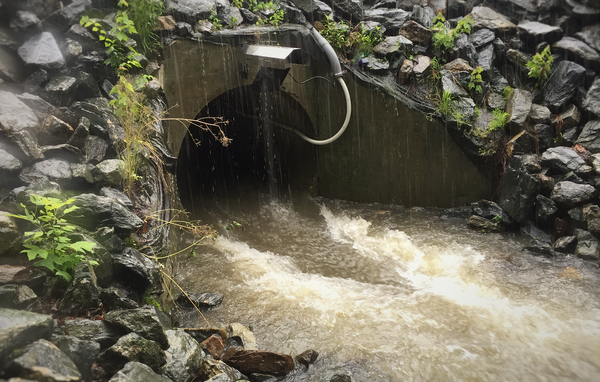 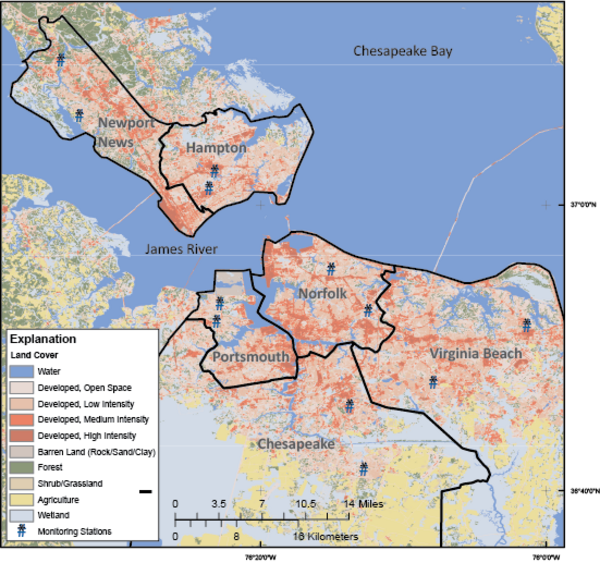