The Science Issue and Relevance: Severe coral disease is now killing corals in the U.S. Virgin Islands (USVI), including those within Virgin Islands National Park and Virgin Islands Coral Reef National Monument.  This disease, tentatively named stony coral tissue loss disease (SCTLD), may be the same one that started killing corals in Florida in 2014.  First observed in 2019 in St. Thomas, it has now spread throughout almost all areas in St. John, St. Thomas and St. Croix.  Up until this outbreak, the greatest degradation of reefs in the USVI within the last 50 years was associated with white plague disease that followed extensive coral bleaching in 2005. From 2005 to 2007, the amount of living coral cover at long-term sites monitored by USGS and the National Park Service (NPS) declined an average of 60%. With climate change, high seawater temperatures are expected to lead to more frequent bleaching episodes and possibly more disease outbreaks. The anticipated benefits of the marine protected areas (i.e., the national park and national monuments in the USVI) could be undermined by these stressors.

In 2006, Acropora palmata, the primary reef-building species in shallow water throughout the Caribbean, was listed as threatened under the U.S. Endangered Species Act based on losses from disease and major storms.  In 2014, 5 more species, including two Orbicella species that are the most abundant around St. John, were also listed as threatened. Acropora palmata is not known to be affected by SCTLD, but it is estimated that over 90% of the Caribbean population was killed by white band disease. There is a need to better understand the relationship among high seawater temperature, bleaching, and disease.

Methodology for Addressing the Issue: USGS WARC is collaborating with other USGS scientists and partners from the University of Puerto Rico and the NPS to collect samples from diseased and apparently normal coral colonies around St. John and Puerto Rico to determine if the disease observed in these areas is the same as that in Florida. USGS scientists will be relating the appearance of gross lesions to the condition of the tissues when examined with light and electron microscopes, and will continue to monitor and photograph corals around St. John, inside and outside NPS waters, primarily to document the spread of SCTLD and the coral species affected. USGS WARC regularly provides observations to the Virgin Islands Coral Disease website and confers with other experts regarding the spread of SCTLD and how different coral species respond to the disease.

Future Steps: Efforts will be made to sustain sampling and monitoring of sampled corals over time by the University of Puerto Rico and the NPS. Such time series of corals have received very little attention to date. USGS WARC will continue to monitor and photograph diseased and unaffected corals. 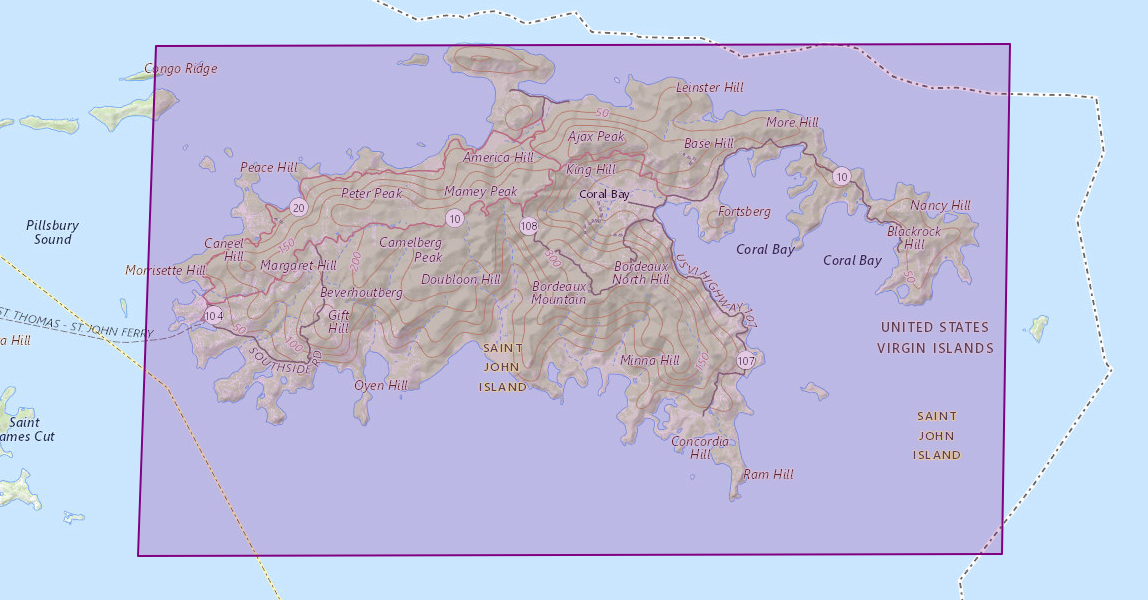 The non-native seagrass Halophila stipulacea has spread rapidly throughout the Caribbean Sea (Willette et al. 2014); without additional research, the ecological ramifications of this invasion are difficult to predict. Biodiversity, connectivity of marine ecosystems, and recovery of degraded coral reefs could all be affected. The invasive seagrass, native to the Red Sea and Indian Ocean, has taken
By
Ecosystems, Climate Adaptation Science Centers, Wetland and Aquatic Research Center
May 22, 2014

Early signs of recovery of Acropora palmata in St. John, US Virgin Islands

Since the 1980s, diseases have caused significant declines in the population of the threatened Caribbean coral Acropora palmata. Yet it is largely unknown whether the population densities have recovered from these declines and whether there have been any recent shifts in size-frequency distributions toward large colonies. It is also unknown whether colony size influences the risk of disease infect
By
Ecosystems, Wetland and Aquatic Research Center
April 15, 2013

Irrefutable evidence of coral reef degradation worldwide and increasing pressure from rising seawater temperatures and ocean acidification associated with climate change have led to a focus on reef resilience and a call to “manage” coral reefs for resilience. Ideally, global action to reduce emission of carbon dioxide and other greenhouse gases will be accompanied by local action. Effective manage
By
Ecosystems, Wetland and Aquatic Research Center
January 1, 2013

A long-term study of the scleractinian coral Acropora palmata in the US Virgin Islands (USVI) showed that diseases, particularly white pox, are limiting the recovery of this threatened species. Colonies of A. palmata in Haulover Bay, within Virgin Islands National Park, St. John, were examined monthly in situ for signs of disease and other stressors from January 2003 through December 2009. During
By
Ecosystems, Wetland and Aquatic Research Center
November 9, 2010

Coral reef diseases in the Atlantic-Caribbean

Coral reefs are the jewels of the tropical oceans. They boast the highest diversity of all marine ecosystems, aid in the development and protection of other important, productive coastal marine communities, and have provided millions of people with food, building materials, protection from storms, recreation and social stability over thousands of years, and more recently, income, active pharmacolo
By
Ecosystems, Wetland and Aquatic Research Center
January 1, 2009

In the northeast Caribbean, doldrum-like conditions combined with elevated water temperatures in the summer/fall 2005 created the most severe coral bleaching event ever documented within this region. Video monitoring of 100 randomly chosen, permanent transects at five study sites in the US Virgin Islands revealed over 90% of the scleractinian coral cover showed signs of thermal stress by paling or
By
Ecosystems, Wetland and Aquatic Research Center