Using ecological and geographical data, WARC researchers and their partners are analyzing avian and benthic sampling on Whiskey Island and Caminda Headland to compare pre- and post-restoration aspects of habitat occupancy, habitat availability, habitat use, and kernal density estimation.

The Science Issue and Relevance: Barrier islands provide resources and ecological services that are integral to economic and environmental interests, such as protection of coastal infrastructure and providing habitat for wildlife. Therefore, it is imperative that barrier island systems are managed in a way that ensures these systems remain resilient and continue providing ecosystem goods and services, such as sustaining critical wildlife populations over time. However, evaluation of how management actions, such as restoration, and subsequent natural ecological processes impact species of conservation concern is a daunting challenge. This information would allow land managers to target restoration activities that produce the best outcome for multiple stakeholders, including enhancing island sustainability and preserving habitat availability, especially habitat needed by species of conservation concern. We are investigating habitat occupancy and use/function for several focal species on Whiskey Island and Caminada Headland in Louisiana to determine how patterns of distribution, abundance, and behavior change before, during, and after restoration. We also aim to identify how restoration activities influence habitat availability for birds throughout the annual cycle that includes the migratory, wintering, and nesting seasons.

Future Steps: After completing the habitat maps and analyses described above, we will be working to share this information with our partners at the Coastal Protection and Restoration Authority (CPRA), other coastal managers (e.g., U.S. Fish and Wildlife Service, Louisiana Department of Wildlife and Fisheries), and the overall scientific community through presentations, reports, and journal articles. The analytical results and GIS products we produce will be critical to the future restoration and management of coastal habitats in Louisiana and the overall northern coast of the Gulf of Mexico given the amount of current and anticipated restoration projects in the region. 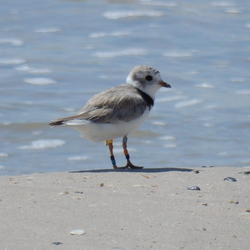 Barrier islands, headlands, and coastal shorelines provide numerous valuable ecosystem goods and services, including storm protection and erosion control for the mainland, habitat for fish and wildlife, salinity regulation in estuaries, carbon sequestration in marshes, and areas for recreation and tourism. These coastal features are dynamic environments because of their position at the land-sea in
By
Ecosystems, Land Management Research Program, Wetland and Aquatic Research Center
April 25, 2019

The Gulf of Mexico is home to a large proportion of the wintering population of the threatened piping plover (Charadrius melodus), but little is known about the bird's ecology in this region. In Louisiana, the majority of nonbreeding piping plovers are found on the state's rapidly eroding barrier islands. Between August 2013 and May 2014, surveys were conducted to assess the abundance and habitat
By
Ecosystems, Wetland and Aquatic Research Center