'Next' to Continue the NASA/USGS Landsat Legacy

With a trio of smaller satellites that can each detect 26 wavelengths of light and thermal energy, the Landsat Next mission is expected to look very different from its predecessors that have been observing Earth for 50 years.

This new plan for Landsat Next, a joint mission of NASA and the U.S. Geological Survey, is designed to provide more frequent, and finer resolution, data of the changing surface of Earth.

“I think this is going to be a phenomenally capable instrument, with the biggest leap in Landsat capability since Landsat 4,” said Bruce Cook, NASA Landsat Next Project Scientist at NASA’s Goddard Space Flight Center in Greenbelt, Maryland. “This is basically the first chance we’ve had to completely re-conceive the Landsat mission.”

The Landsat series of satellites has provided a continuous record of Earth’s surface from space since 1972, allowing researchers and resource managers to track changes in the natural and human-influenced environment. Landsat Next, planned to launch by late-2030, will extend this record while providing more frequent observations, higher resolution images, and more than twice the spectral bands as its predecessors. Earlier this month, NASA officials approved Key Decision Point-A authorization for the mission.

Landsat 9, which launched in September 2021, is a single spacecraft that collects data of Earth’s landscapes and coastlines every 16 days. Its sister satellite Landsat 8 is also in orbit, and together they gather images of any given spot on Earth’s surface every eight days.

NASA and USGS envision a Landsat Next constellation of three spacecraft, orbiting in a configuration that would provide finer spatial resolution and expanded spectral imaging capabilities every six days at the equator. When combined with Landsat 9, heritage Landsat image data would be provided at even higher temporal frequencies, Cook said. These more frequent observations are especially important for tracking fast-changing processes like water quality, crop health, and natural hazards.

The three spacecrafts that make up Landsat Next will be identical, each carrying an instrument or instruments that detect 26 wavelengths spanning the visible to shortwave infrared and thermal infrared regions. This is more than double the spectral bands of Landsat 9, and is designed to allow data users to glean even more information, Cook said.

New spectral bands were added to Landsat Next in response to evolving science and user needs.  For example, new visible bands will help scientists and resource managers manage water quality by identifying chlorophyll or dissolved organic material in the water, as well as harmful algal blooms. Red edge and shortwave bands will help identify stress in forests or croplands. New near infrared and shortwave bands will provide information about snow and ice surface states, water content and freeze-thaw dynamics in a changing climate.

Landsat heritage spectral bands have also been refined. For example, Landsat’s SWIR2 band was subdivided into three bands to advance agricultural management and the impact of crop residues on soil fertility, crop productivity, and carbon sequestration. Landsat Next will also increase the number of thermal infrared bands from two to five, which will provide measures of surface emissivity, improve estimates of surface temperature, and help with mapping minerals.

“One of the things that we’ve really focused on in the Landsat Next project is listening to the user community,” said Chris Crawford, USGS Landsat Next Project Scientist and Co-Lead of the Landsat Science Team. “At the same time, we’re still coming back to data continuity as a guiding observational principle and guaranteeing that no matter what future Landsat missions look like, they maintain continuity and compatibility with the prior historical record. Because that’s really the strong, unique attribute of Landsat: 50 years of measurements that we hope to carry into the next 50 years.” 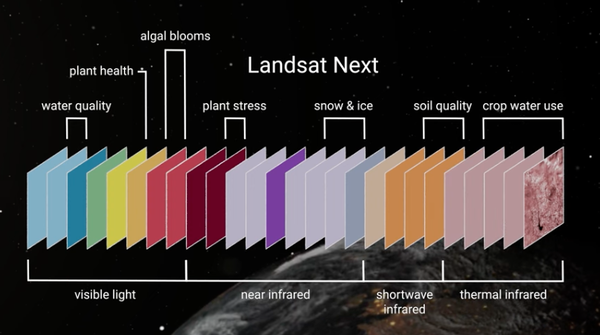 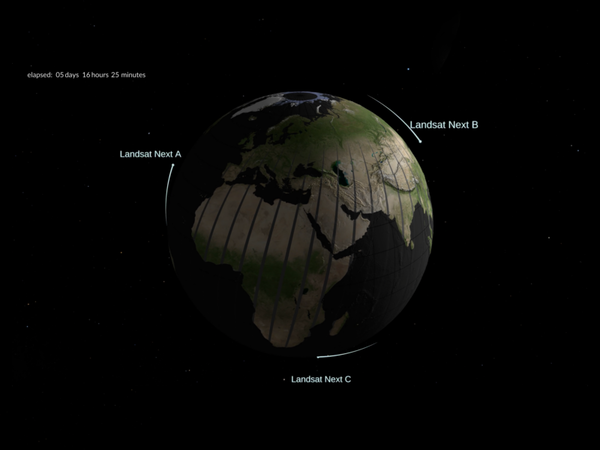 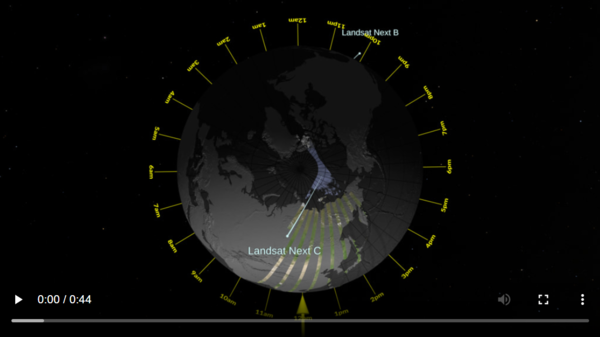 What should Landsat 10—what some are calling Landsat Next, the next generation Landsat observing system—look like when it’s launched in the middle to...