The principles essential to the interpretation of gamma, gamma-spectrometry, gamma-gamma, and various types of neutron logs include the nature of subatomic particles and the particles and photons emitted by unstable isotopes.

The nucleus of an atom consists of protons with a mass of 1 and a positive electrical charge and neutrons with a mass of 1 and no electrical charge. Electrons orbiting the nucleus have a negative charge to balance the positive charge of the protons and a mass equal to 1/1,840 of the mass of a proton. The mass number (A) is equal to the number of protons plus the number of neutrons in the nucleus. The atomic number (Z) is equal to the number of protons; Z is usually the same as the number of orbital electrons and determines the chemical characteristics of the elements. Isotopes are one of two or more different states of an atom; they have the same atomic number but different mass numbers, because of a difference in the number of neutrons. Isotopes of a given element have the same chemical characteristics but a different mass. For example, uranium present in rocks consists of three isotopes with mass numbers of 234, 235, and 238; these isotopes can be separated by differences in their weight. The term “nuclide” refers to each of the possible combinations of protons and neutrons.

Stable isotopes are those that do not change structure or energy over time. Unstable or radioactive isotopes (also called radioisotopes) change structure and emit radiation spontaneously as they decay, and become different isotopes. Almost 1,400 isotopes are known; 1,130 of these are unstable, although only 65 unstable isotopes occur naturally. Most of the radiation emitted during decay originates in the nucleus of an atom; X-rays are derived from shell transitions by the orbital electrons. Radiation from the nucleus consists of alpha particles, positive and negative beta particles, and gamma photons or rays. Alpha particles are stopped by a sheet of paper; beta particles are stopped by 1/25 inch of aluminum. Several inches of lead, however, are required to stop gamma radiation. Of the three types of radiation, only gamma photons are measured by well-logging equipment, because they are able to readily penetrate dense materials such as rock, casing, and the shell of a logging probe.

The processes of transformation of one isotope to another may leave the resulting nucleus with an excess of energy, which may be emitted as electromagnetic radiation in the form of gamma photons or gamma rays. Because photons have some characteristics of both particles and high-frequency waves, the term “gamma photon” is more technically correct than “gamma ray”; both terms are used in logging literature. The energy of gamma photons can be used to identify the isotope that emitted them; this is the basis for gamma-spectral logging and neutron-activation logging. The energy of radiation, both neutrons and gamma photons, is measured in electronvolts (eV), thousands of electronvolts (keV), and millions of electronvolts (MeV). Radiation intensity is measured directly as the number of pulses detected per unit time, which may be converted within the logging equipment to some other unit of measurement, on the basis of calibration.

The information provided above is excerpted from: Keys, W. Scott, 1990, Borehole Geophysics Applied to Ground-Water Investigations: Technical Water-Resources Investigations of the United States Geological Survey, Book 2, Chapter E2, 150 p. Information about number of known elements and isotopes was accurate at the time of original publication (1990).

Below are other science projects associated with this topic. 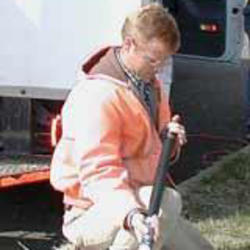