Landsat satellites exist to provide information—millions of images’ worth of information—about the Earth’s surface.

Dr. Alan Belward has used this information for studies ranging from surveying the world’s forests to tracking changes in global surface water. He lauds Landsat for its usefulness, but that’s not exactly what inspired the scientist at the European Commission’s Joint Research Centre to craft a coffee-table-style book that draws on non-ocean images of surface water.

Rather, Belward felt inspired to share the beauty of the images and the stories behind them in a format “quite difficult to ignore.”

Stories as common as a nearby source for drinking, bathing, cooking. As rare as a meteorite-caused ring-shaped lake in Canada. As variable as the Brahmaputra River channels, or as timeless as the Great Lakes. Stories about the life-giving properties of water—and its potential for taking lives.

The “Atlas of Global Surface Water Dynamics” takes images from the U.S. Geological Survey (USGS) Landsat satellite system and its counterpart, Europe’s Copernicus Sentinel satellites, beyond the limitations of a computer screen, although a pdf version is available here. The colorful and curious satellite images displaying decades of change sprawl across open-facing pages the size of wall art. Readers can see how some lakes have shriveled and others have emerged. A description of the region, photographs, additional images and the latitude and longitude coordinates accent each two-page spread that highlights bodies of water on all seven continents.

“Less than one in a thousand liters of all water in the world sits on the (land) surface, and it can be anywhere, and it comes and goes,” Belward said. “So you have to look everywhere all the time. And that’s where the satellites come in.”

‘An Unbroken Record’ of Satellite Images

The Landsat satellites’ history dates to the launch of the first one in 1972 and continues through Landsats 7 and 8, which currently orbit the Earth. Between the two satellites, Landsat observes every point on Earth every eight days. The USGS Earth Resources Observation and Science (EROS) Center operates the satellites, collecting data and storing millions of images over nearly five decades.

The atlas also includes images from the Sentinel satellites. But Landsat’s continuity makes it uniquely valuable, said Belward, who served for about a decade as an external scientist on the USGS-NASA Landsat Science Team. Landsat has been critical for projects like the atlas and the digital dataset that the atlas drew from, the Global Surface Water Explorer.

“It’s the longest-running satellite program of all of the ones that we use … particularly for my interest on the land and land mapping,” Belward said.

“And absolutely crucially, it’s not just been around the longest, it’s been unbroken. It’s an unbroken record.”

Belward has memories of his excitement in the early 1980s when he was able to use just a couple of Landsat scenes at the beginning of his research. At that time, processing a project on a global scale was unimaginable. But, he said, “you had this notion that Landsat had this capability. It was up there, it was orbiting, it was looking at the entire planet’s surface … in this amazing detail at 30 meters.”

Surface Water Changes Through the Decades

Eventually, with Landsat’s free and open data policy and Google Earth Engine’s dataset processing abilities, Belward could harness that capability to help create the Global Surface Water Explorer. Maps could show changes in surface water between 1984 and 2015 and answer crucial climate variable questions about the location and size of all the lakes around the world. “All of this sort of theoretical thing of Landsat looking at the whole planet every 16 days for year after year after year was suddenly real, and we could use those measurements to build maps with that time dimension in them,” he said.

“We discovered very early on that surface water was a lot more fluid than we’d expected.”

For a variety of reasons, rivers shift. Lakes get larger, smaller, disappear—or even appear on top of glaciers or behind new dams. It’s with the illustrations of events like these that the European Commission publication commands attention.

Belward—along with a team of other authors and contributors, including co-editor and Landsat Science Team member Jean-Francois Pekel—uses a traditional method to tell these stories: a book whose weight and size serve to emphasize the importance of the topic. Because of the coronavirus pandemic, he’s also currently using a traditional method to deliver the newly released volume: mail service. Otherwise, he would be able to hand the books out en masse at conferences.

Belward wants to reach people who make decisions and set policies about the environment, development, climate adaptation, and agriculture. Libraries, institutions, offices, and lobbies are desired destinations. Education policymakers are on his list, too—he thinks high school students would benefit from the background and description of remote sensing, Landsat archive management, and how satellites “see” the water.

The atlas discusses how surface water fits into many systems on Earth, from climate and industry to energy production and agriculture. It describes the myriad ways in which water affects humans and humans affect water.

The atlas also points out a fact about Earth’s surface water that might surprise some readers: “We’re gaining so much more than we’re losing,” Belward said.

It’s true some bodies of water, such as the Aral Sea and Lake Mead, are shrinking from usage demand and climate factors. But those losses have been more than offset by gains of new meltwater lakes on the Greenland Ice Sheet, for example, and lake expansions on the Tibetan plateau from increasing snow and glacial melt.

A change in surface water is tremendously important, Belward said, because of how it affects the surrounding area. Take the change that occurs with a new dam on a river. A lake fills behind it, which changes the energy interactions and biology of the area, he said. The river flows on below it, altered from its free-flowing state. If the dam should happen to break, the biology surrounding it changes again. If people below get swept away, it’s a story that turns tragic.

But the dam could offer electricity to tens of thousands of people who lack reliable power. “There’s always a tradeoff,” Belward said.

Too Hard to Pick a Favorite

Belward’s current work in leadership at the Joint Research Centre involves agricultural policy in the European Union, including the role of water. When he started to work on the atlas in his spare time, he figured it would be a matter of simply gathering already existing data, maps and information together. When he decided the atlas needed to include more science and more stories, it turned into a complex project—a “real hard slog” of nights and weekends for eight or nine months.

He names a few examples: the beauty of the three rivers across Siberia and the braided Brahmaputra River in Asia; the history of medieval fish ponds in France; the abundance of rice fields in Italy.

As much as he knew about surface water before, Belward still found something in his atlas work to surprise him: “Just how variable and beautiful the planet actually is.”

As readers page through the satellite images stretched across their lap, they’ll surely echo that same thought. 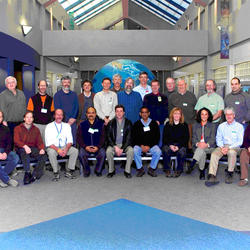 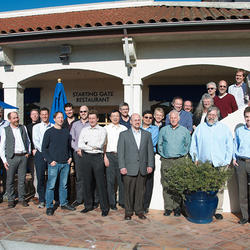 As recognized national and international leaders in land remote sensing, 2012-2017 Landsat Science Team members were tasked with evaluating issues of importance to all Landsat users. They played a key role in ensuring that data from future missions are successfully integrated with already archived remotely sensed data for the purpose of observing national and global environmental systems.

As recognized national and international leaders in land remote sensing, 2012-2017 Landsat Science Team members were tasked with evaluating issues of importance to all Landsat users. They played a key role in ensuring that data from future missions are successfully integrated with already archived remotely sensed data for the purpose of observing national and global environmental systems. 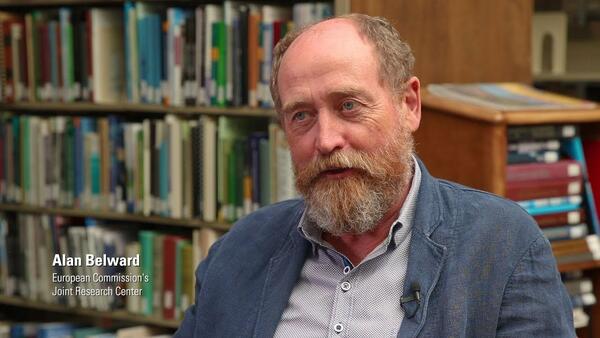