Tracking large fire potential in the past, present, and future through remotely sensed data just got a lot simpler.

The Fire Danger Forecast project from the USGS Earth Resources Observation and Science (EROS) Center near Sioux Falls, SD has updated its web viewer to allow users to more easily scan daily data on fire probability across the United States.

The new Fire Danger Viewer lets users open multiple datasets – such as Fire Potential Index and Large Fire Probability – within the same window, as well as to easily scroll back through time from 2017 through the present, and forecasted seven days into the future.  Additional historical data going back to the early 2000’s will also be added in the future. Users can zoom in to their area of interest and download data with one click.

“This data is updated on a daily basis so users can go look at them, download them and compare them side-by-side and see how things are changing,” said EROS contractor Danny Howard, manager for the Fire Danger Forecast project.

The improvements don’t end with the map viewer, however. Much of the same data is available in downloadable daily image and data formats through the website’s Static Maps link. Users can pick the day of the year they’re most interested in, click their product and scroll through daily maps as an automated or user-controlled slide show.

The data products themselves are generated through historical fire occurrence, weather, and climate data, as well as through Normalized Difference Vegetation Index readings derived from the MODIS sensor onboard the NASA Terra and Aqua polar-orbiting satellites.

These data help project collaborators such as the U.S. Forest Service and National Parks Service quickly determine how to deploy resources to manage fire danger across wide swaths of federally-held land.  The products are also used by academic researchers and several private industry groups to determine wildland fire risks to their operations. Some of those collaborators got a look at the changes to the website earlier this month.

“There are a number of different ways to characterize wildland fire risk or potential, and our data focus specifically on the small percentage of fires that become very large and have the highest impacts on both people and the environment” Nelson said.

The web updates simplify the process of scanning datasets and looking back at future forecasts, which Howard said will make it easier to sift through multiple sources of information. 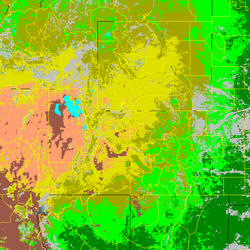 USGS Earth Resources Observation and Science (EROS), in conjunction with the US Forest Service Pacific Southwest (PSW) Region, has developed several new products for understanding and forecasting the probability of large wildland fires on all land in the conterminous U.S.
Learn More
December 21, 2018