When it comes to studying snow and ice across the American landscape, Landsat’s niche is clear, says Research Geographer David Selkowitz with the USGS Nevada Water Science Center.

Sensors like NASA’s Moderate Resolution Imaging Spectroradiometer (MODIS) can capture a near daily look at snow cover, but they can’t do it at Landsat’s spatial resolution. The finer scale that Landsat brings is crucial for monitoring glaciers, Selkowitz said, and for studying the variability of snow cover in rugged topography and alpine terrain.

But Landsat also offers a longer historical record as well, the depth of which takes researchers back to the early 1980s compared to MODIS, which launched in 1999. And now Landsat’s value as a research tool has expanded even further with the development and recent release on EarthExplorer of the Landsat Level-3 Fractional Snow Covered Area science product, which can provide fractional snow covered area maps that indicate the percentage of a pixel covered by snow for Landsat 4-8 data.

So, for example, researchers looking at areas of dense forest canopy in the Western U.S. can get a more accurate estimate of snow cover in these areas. That’s because a dedicated algorithm flags the dense canopy pixels where snow cover is often missed and considers snow cover conditions on nearby pixels with less dense canopy to produce a final snow cover estimate, Selkowitz said. “This gets us much closer to mapping the ground snow cover fraction, which for most scientists and resource managers is much more meaningful than the ‘viewable’ snow cover fraction” from above, he said.

Selkowitz is the principal investigator who developed the Level-3 snow product based partially on previous work done by Dr. Tom Painter from NASA’s Jet Propulsion Laboratory. Selkowitz discusses that and much more below.

Tell us what the Landsat Level-3 Fractional Snow Covered Area Product does?

“Basically, the main product indicates a fraction of snow cover between zero and one that’s on the ground for each pixel. We typically use it as a fraction between zero and one, but people also refer to it as a percentage from zero to 100. And there are two levels of cloud masks. There’s the extended cloud mask that is distributed with just about all the EROS Landsat products. But we found that to be kind of insufficient for the snow product because it would very frequently call snow covered pixels cloudy. So, we have what I would call a more conservative cloud-masking algorithm. A lot of areas masked as cloud in the original mask end up showing up cloud free in this version. And that’s what we’re encouraging people to use when they use the product.”

Where do you see the fractional snow covered product having the greatest impact?

“I would say a key area is in automated monitoring of changes in glacier area. While Landsat has been used for glacier monitoring for several decades, the new product will eliminate several steps in the process and make it easier to get to final maps indicating glacier extent for a given time period. A second area I see is using Landsat data to produce high spatial resolution snow climate records. Over a multi-year period—and especially over the entire Landsat period of record—it is possible to map snow cover duration across the entire landscape at a much higher spatial resolution than has previously been possible. And third is the possibility of combining data from Landsat with other sensors such as MODIS or VIIRS (Visible Infrared Imaging Radiometer Suite) to produce daily or near daily estimates of a snow covered area.”

Why is mapping snow cover duration across an entire landscape important?

“I've already seen quite a bit of interest from ecologists and wildlife biologists working in mountain ranges where snow cover has a large impact on the distribution and phenology of many plant species and the behavior of certain animals. For these groups, the high spatial resolution we can achieve with Landsat data makes a world of difference. I even worked with an archaeologist who was able to use Landsat snow duration maps we produced for the Andes to determine the most likely routes for historical travel across the mountains.”

How specifically would a wildlife biologist use this product?

“A wildlife biologist might be interested in looking at a specific habitat type for various animals that live in high mountain environments, such as bighorn sheep or wolverines. One of the things that can control where those animals can go and where they like to spend time is snow cover persistence. So, the existing snow covered products that are based at coarse spatial resolution, like half a kilometer, that doesn’t really give them very detailed insight into where an animal might be. But when you have a 30-meter product, you can get a lot more insight into where animals might be, where they might travel, where they might be denning.”

How intuitive would a Level-3 product be to use for someone less familiar with remote sensing?

“Basically, if you’re a wildlife biologist and you have sort of limited experience with remote sensing, this is a product that you could pick up fairly easily, plop into a GIS system and say, ‘Oh, OK, I see some patterns here.’ Whereas, if you were looking at a lower level Landsat product like the surface reflectance Level-2, you would have to apply a lot of processing before you could get to something that actually made sense.”

So, is the value of this Level-3 product that it saves a lot of processing time?

“Honestly, that’s going to depend a lot on which type of researcher is looking at a problem. If you’re looking at someone who is an expert in remote sensing and has done this kind of work forever, it’s probably not going to be as big of a deal. But if you’re looking at, say, a climatologist or someone who’s a snow science researcher who has minimal remote sensing background, those kinds of steps could take them a whole lot of time, days for sure, and maybe months. The idea is that with this product, if you’re not an expert in remote sensing, you would still be able to use it off the shelf and make some meaningful analysis with it.”

How will this Level-3 product impact the monitoring of glaciers?

“Historically, the trend in monitoring glaciers was to use single image pairs that involved a lot of manual interpretation. That works fine if you’re looking at a portion of a Landsat scene or maybe a couple of glaciers. But if you’re trying to map, say, changes in all glaciers throughout the state of Alaska over a 20-year period, that can be obviously incredibly time consuming. So, there has been work within the last 5 to 10 years to develop automated monitoring techniques that can basically ingest all the data and try to produce reasonable estimates about changes in glaciers.”

So, this product will assist in the automation of the monitoring?

“Yes. And I should mention that as of right now, the tile-based product for individual scene dates are already online. Coming up quite soon, we’ll have period-of-record summaries, and those will be broken down also by month and by 5-year time periods. So, someone without much experience might be able to, for instance, compare the percent of days in the mid-1990s with snow cover in August versus the percent of days in the last five years with August snow cover, snow meaning snow and ice. Although the final algorithms are considerably more complicated, they can get a quick estimate of changes in glaciers just doing that.”

Talk about its potential for daily or near daily estimates of snow cover.

“I’ve actually done some of that work in the Sierra Nevada, and it seemed to work pretty well, combining MODIS and Landsat. That data would be particularly useful for folks working in potentially smaller basins that would, first of all, potentially have no in situ instrumentation. So, they’re relying completely on remote sensing data. Then the fact that they’re working in a small basin means that they would have basically just a few pixels from a coarser resolution sensor like MODIS, so that doesn’t give them a lot of information. But MODIS can provide the information about what’s happening on a day-to-day basis, and Landsat can sort of sharpen up the spatial information.”

So how accurate is this Level-3 product for fractional snow cover?

“We’re still in the process of assessing the accuracy of the fractional snow cover values, but from what I’ve seen so far, I expect the error rate will come out to around 20 percent. We’ve also used observations from automated snow monitoring stations on the ground to look at binary accuracy, basically how often the product correctly identifies the presence or absence of snow cover at a pixel. Our preliminary data suggest the binary accuracy will be about 94 percent, pretty similar to what I’ve seen for the MODIS snow products. I’m especially happy to say that the accuracy in forested regions doesn’t begin to drop until the canopy gets quite dense, like 65 to 70 percent or more, and even then, the error rate is manageable. Without the canopy adjustment, many high elevation, densely forested pixels would be mapped as having no snow cover the whole winter, when in fact they are typically snow covered from November to May. But by looking at nearby pixels that might have either meadows or a lower canopy density, as we do, we can infer that in fact, there was snow in those pixels and come up with a much more accurate time series showing what the snow cover was beneath the dense forest canopy.” 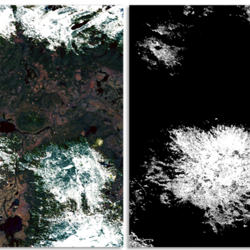 A new Landsat Level-3 science product that tracks the presence of burned areas in Landsat imagery today and back through the satellite system’s...

When wetlands are drying up, endangering the habitat of a threatened species, aquatic ecologists and resource managers want and need to know that. A...