When wetlands are drying up, endangering the habitat of a threatened species, aquatic ecologists and resource managers want and need to know that. A new USGS science product is helping to provide them that information.

Weather, climate, stream network hydrology, and geologic characteristics all influence and interact with surface water extent in river, lakes, and wetlands, said John W. Jones, a Research Geographer with USGS’ Hydrologic Remote Sensing Branch in Reston, VA. Over time, the number and size of those surface water bodies throughout the United States have been impacted by large-scale land cover and land use changes, climate change and variability, and increasing water demands from agricultural, industrial, and domestic water uses, Jones said.

To help researchers study those changes and trends, he created Dynamic Surface Water Extent (DSWE), one of a trio of Landsat Level-3 science products released in February 2019 by the USGS. Jones discusses DSWE, who uses it, and its value, in this question-and-answer session.

What does the Level-3 Dynamic Surface Water Extent Product provide?

“The goal for DSWE is to test every cloud-, shadow-, and snow-free pixel in the Landsat archive—from the early 1980s to present—for the presence or absence of surface water. DSWE includes tests at the sub-pixel scale, which helps identify mixtures of vegetation, soil, and water, in addition to pixels covered entirely by open water.”

So, you’re talking about looking at surface water as it relates to wetlands?

“DSWE portrays all detectable surface water. But wetlands with vegetation in or over them is especially challenging and important. Take the Florida Everglades as an example. I have a long history of working in the Everglades and am familiar with its surface water dynamics and the importance of those dynamics for habitat and water quality, as well as the local weather/climate.  If you only use algorithms that focus on open water Landsat pixels, most of the Everglades looks like a place that doesn’t have water in it. As another example, the Prairie Potholes region of the northcentral U.S. is a place where there are a lot of small, really important interconnected and unconnected wetlands. These don’t show up as water in moderate resolution satellite data like Landsat unless you design your tests to look for them. In general, larger wetlands, lakes, and rivers that have vegetation in or along their boundaries are monitored best with Landsat if we can detect water at the sub-pixel scale. I focused DSWE development on this issue to address this data gap.”

What are some examples of research people are doing with DSWE?

“My own examples include looking at variations in river width to develop ways to estimate the amount of flow in streams. I’m also collaborating with aquatic ecologists and land resource managers who are interested in finding habitat for their critters, and then understanding not only when these habitats are wet and dry, but whether that timing is changing and, if so, why. There are projects like that across the country, some dealing with threatened species habitat. I’m also working with scientists interested in data on the timing of wetland wetting and drying to help model the cycling of greenhouse gases such as carbon and methane.”

Can you talk about specific users?

“The U.S. Fish and Wildlife Service is really interested in the DSWE dataset to improve their wetland mapping process. We can view the DSWE record for an area as a time series in an animation. This allows them to fit the individual measurements they’ve made in the field with some other imagery into a broader temporal context and understand where their measurements fall within the longer-term behavior, for lack of a better word, of the hydrologic system. In some cases, this shows that the time slice used for wetland inventory was a relatively dry period, leading to an underestimation of typical wetland extent. The DOI (Department of Interior) is interested in looking at flooding on DOI lands. What’s been the flood extent in this national park for these areas where we don’t have records?”

Would it only be useful here in the United States?

“Any DSWE application of interest in the U.S. is potentially even more important elsewhere, particularly as other regions haven’t the wealth of data available in the U.S. Experimentally, it’s already been applied elsewhere on the globe, looking, for example, at things like rapid reservoir expansion and whether dam failures in remote regions might be a concern.”

What does this Level-3 product bring to the work of researchers?

“Well, I think for everybody, it removes a lot of work. People don’t have to generate these data themselves. Every user I’ve already worked with and most potential users I’ve discussed DSWE with say something like, ‘Oh my gosh, I’ve been struggling to generate surface water from Landsat, and I just want the result. I don’t want to have to go through all these gyrations to get that kind of output.’ This is a benefit common to all Landsat Level-3 products. We’re providing long-term scientific records that are ready for and enabling analyses that would be very difficult otherwise—particularly for those who haven’t the means to produce these data even though Landsat image data (Level-1 and Level-2) are freely available.”

So, what specific work does it remove?

“When you’re working with satellite data, you have to remove image distortions caused by the curvature of the Earth and rugged terrain. You have to mitigate effects of the atmosphere. You have to compensate for the effects of the look angle of the instrument. And you have to convert sensor specific digital numbers to physical values of reflectance. The result is the Level-2 product. But to go from that reflectance value to the determination of what the surface land cover is, you’ve got to further process every pixel in ways that are very complex. There’s both art and science to that processing. By producing DWSE, all the processing to determine whether something is inundated, and whether that inundated place is just water, or is water and vegetation, or water and soil, is done for the user at the finest spatial resolution and temporal frequency possible—with more than three decades of Landsat data. That can be significant to a lot of people because now people who aren’t remote sensors, but who are hydrologists, biologists, climatologists and resource managers, can use the results.”

Does DSWE allow for automated monitoring of changes in surface water extent that wasn’t available before?

“Sure. Absolutely. Let’s take the case of stream flow estimation—what we’re calling ‘virtual gauges.’ If we can work out the algorithms that allow us to calculate discharge, we’ll be able to estimate stream flow at places that are hard to access, and where it is really expensive and dangerous to make our conventional water measurements. So, you’ve gone from a laborious and potentially dangerous and therefore expensive process to one that can be automated. We still need conventional gauges to calibrate and test the remote-sensing based models. But DSWE helps estimate flows in between the places where we have gauges, or where it’s difficult to go to begin with. So, we’re able to provide greater coverage on an extremely important variable from scientific, resource management and safety perspectives than has been possible before.  And wetland dynamics are a unique contribution from DSWE.  We’re gaining insight regarding the frequency, timing, and length of time that wetlands are inundated (called the hydroperiod) that weren’t apparent on such broad time and space scales without DSWE.”

Have you considered linking MODIS or VIIRS into your work to get near-daily estimates of surface water extent?

“When it comes to water and wetland extent, an awful lot of the users I deal with need higher spatial resolution than what MODIS or VIIRS provides. For example, approximately 80 percent of the streams the USGS monitors are less than 100 meters wide, and you can’t say anything about rivers anywhere close to that size with VIIRS, MODIS, or AVHRR. Detecting the amphibian habitat I mentioned previously can be a real stretch for even Landsat. There’s a lot of wetlands we can monitor very easily with Landsat that are important for amphibians, but there are also a lot that are very, very small. So, users are always interested pushing the limits of what’s possible with Landsat, or even higher spatial resolution commercial imagery. So, while there’s potential to improve temporal resolution with MODIS, my research is now focused on the combination of DSWE with multiple higher spatial resolution optical and RADAR satellites to monitor surface water dynamics with greater temporal frequency.”

Can you envision Level-4 products for surface water extent?

“Yes, I can see that.  DSWE is already an input to additional processing that combines other instruments to create higher-level information. Discharge is an example of that. We’re taking satellite-based altimetry, which is yet a different type of measurement entirely, and combining that with the surface area from DSWE to get at discharge. So, to me, something like discharge would be the next level derived from this Level-3 product. Other examples include reservoir storage, wetland hydroperiod, habitat condition, etc. Importantly, we are talking about changes in streamflow, lake storage, hydroperiod, and habitat over time.  It is the dynamics of these processes that we need information on.  And the systematic collection, production, and open distribution of data like DSWE makes that possible.” 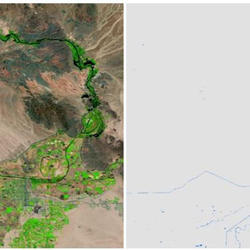 A new Landsat Level-3 science product that tracks the presence of burned areas in Landsat imagery today and back through the satellite system’s...

When it comes to studying snow and ice across the American landscape, Landsat’s niche is clear, says Research Geographer David Selkowitz with the USGS...