Looking at Past, Future Spread of Invasive Plants Like Cheatgrass

A new publication about exotic annual grasses not only documents their abundance across the western United States, but peers into the past to assess their spread and into the future to predict changes.

Lead author Dr. Neal Pastick, a contractor at the USGS Earth Resource Observation and Science (EROS) Center, and other EROS scientists used remote sensing, field observations, and climate data—plus machine-learning techniques—to examine the patterns of change associated with damaging invasives like cheatgrass across a wide section of the sagebrush ecosystem.

“Rapid Monitoring of the Abundance and Spread of Exotic Annual Grasses in the Western United States Using Remote Sensing and Machine Learning” draws on modeling that considers the complexity of ecosystem interactions, the effects of wildfire and other disturbances, and climate and its expected changes. The study provides information to help land resource managers with planning and response strategies.

“There’s been a long, rich history of trying to map cheatgrass cover within the western United States,” Pastick said. This study is associated with a system to continually monitor exotic annual grass cover, dubbed the USGS Rangeland Exotic Plant Monitoring System. Several dataset releases each year will be available to help guide fire and land management.

Historical data for the study ranged from 1985-2019. The year 2020 was considered the present, and years 2025-2040 the future. The study found exotic annual grasses increased on 8% of the western U.S. landscape and decreased on 1% since 1985. By 2040, the authors expect 8% more of the landscape to cross the tipping point to invasion, including 6% of sage-grouse habitat.

Wildfires especially contributed to large invasions and persistence in change from shrub and perennial herbaceous landcover, with fuel loads playing a role. Management treatments such as herbicide applications and seed drilling can suppress the exotic annual grasses, the study noted.

Climate change is expected to encourage exotic annual grass invasion by altering some habitats to be less suitable to native plant species, such as higher elevations where temperatures are projected to increase. Ultimately, this would decrease the sagebrush conditions relied on by the habitat-sensitive greater sage grouse.

Satellite imagery was critical for the study. “You can’t effectively monitor these vast landscapes without remote sensing data, and couple that data with field observations, you can tell a nice story, like we did here,” Pastick said.

The Harmonized Landsat and Sentinel-2 product helped tell that story, quantifying exotic annual grass cover variations. The 30-meter pixels were an improvement in resolution over the historical use of the coarser MODIS data, at 250 meters, Pastick said.

“Individuals are clamoring for those datasets. … Given the 30-meter spatial resolution, these products can be directly used by land managers for targeted decision making, such as where to place fuel breaks, which weren’t possible with the 250-meter datasets,” Pastick said.

He thinks findings about the threshold of invasion could be useful to managers trying to keep exotic annual grasses from establishing a foothold or becoming pervasive in areas that are still dominated by native species. In addition, as the Bureau of Land Management considers where to put together fuel breaks, or areas that have eliminated fuel for wildfires, this study aims to help guide the most beneficial and effective placement.

“I’m really hopeful that folks can use these datasets to better manage these ecosystems and protect sage grouse habitat in particular,” he said. 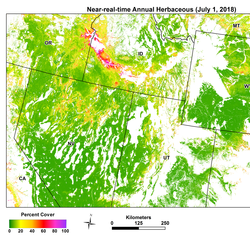 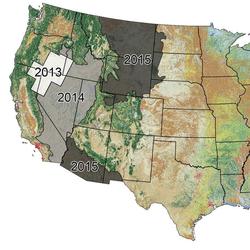 Invasive annual grasses, such as cheatgrass (Bromus tectorum L.), have proliferated in dryland ecosystems of the western United States, promoting increased fire activity and reduced biodiversity that can be detrimental to socio-environmental systems. Monitoring exotic annual grass cover and dynamics over large areas requires the use of remote sensing that can support early detection and rapid resp
By
Earth Resources Observation and Science Center, Earth Resources Observation and Science (EROS) Center
link
March 2, 2020

The conception of an invasive species in popular culture is generally tied to living things more mobile than cheatgrass – think zebra mussels in the...

The case for sagebrush habitat as the iconic landscape of the American West is a fairly one easy to make.