One of the most productive areas in the world for oil remains rich in the resource, according to the latest USGS assessment. The USGS estimates 3.6 billion barrels of oil and 8.9 trillion cubic feet of natural gas conventional resources in Alaska’s Central North Slope. This assessment does not include discoveries made by industry between 2013 and 2017.

“Alaska is synonymous with energy, and this assessment just reinforces that,” said USGS Director Jim Reilly. “The State of Alaska and its industry partners have responsibly produced billions of barrels of oil from Prudhoe Bay, and we think there are still billions more in this region that can be produced.”

Alaska’s Central North Slope has long been known to be rich in oil and gas resources. The assessment area hosts most of the producing oil and gas fields in Arctic Alaska, and the 800-mile-long Trans-Alaska Pipeline spans most of the region.

The supergiant Prudhoe Bay field is within the assessed area, which lies between the National Petroleum Reserve-Alaska to the west, the Brooks Range to the south and the Arctic National Wildlife Refuge to the east.

Most of the lands in the Central North Slope are owned by the State of Alaska and Alaskan Native Corporations.

The resources estimated in this report are undiscovered, technically recoverable conventional resources. Conventional resources are those that have collected into discrete accumulations that can be produced using traditional production techniques. These are in contrast to continuous resources, which are those spread throughout a rock layer and typically require enhanced recovery techniques such as hydraulic fracturing to produce.

The new assessment of the Alaska Central North Slope may be found here. To find out more about USGS energy assessments and other energy research, please visit the USGS Energy Resources Program website and follow us on Twitter. 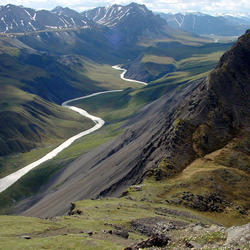 The Department of the Interior has announced petroleum assessments from the