A first-of-its-kind study by the USGS and partners provides an initial analysis of when commercial chicken and turkey facilities in the U.S. are at greatest risk to avian influenza viruses from one species of migratory waterfowl.

Scientists identified the migration patterns of blue-winged teal, a common carrier of avian influenza viruses, and when they were most likely to be on the ground and in close proximity to domestic poultry facilities. Blue-winged teal are one of 11 dabbling duck species that regularly breed in North America, and dabbling ducks are the primary waterfowl species known to carry and shed avian influenza viruses in the U.S.

This study is the first to examine the movements of a waterfowl species likely to carry the viruses and their proximity to domestic poultry facilities. It is critical to helping inform poultry industry officials, the U.S. Department of Agriculture and wildlife management agencies as they develop strategies such as surveillance programs to track wild birds and the occurrence of avian influenza to ensure viruses are not introduced into commercial facilities.

Research finds that facilities in northern states may be at higher risk for potential transmission during the ducks’ fall migration from mid-September through mid-November, as that is when blue-winged teal are in the closest proximity to domestic poultry facilities. Research also finds that commercial chicken operations in southern states may be at higher risk of disease transmission during the duck’s spring migration from March through April. In contrast to chicken operations, contact probabilities with commercial turkey facilities were found to be relatively low in the spring.

An outbreak of avian influenza in poultry from 2014 to 2015 resulted in the loss of 50 million chickens and turkeys and cost the economy approximately $879 million dollars. Though not believed to originate from blue-winged teal, this outbreak shows the importance of science to help understand potential risks to the poultry industry.

Experts estimate that the global economy could face billions of dollars in financial losses from future outbreaks. Hundreds of human deaths have also been attributed to avian influenza.

“This research serves as the first look into the periods of elevated transmission risk for avian influenza to poultry facilities,” said USGS research wildlife ecologist Diann Prosser. “While the migration patterns of blue-winged teal are generalizable to other dabbling ducks, additional work is needed to understand how various waterfowl species differ in migration timing and habitat use, as well as which species carry the highest viral loads of the virus that causes avian influenza.”

Previous research has indicated that the prevalence rate for these viruses in blue-winged teal is comparable to other dabbling duck species. However, the exact prevalence rate is not currently known for most dabbling ducks within the continental U.S. and will vary depending on local conditions and exposures.

The USGS is conducting additional research to understand migration patterns for other waterfowl species and potential overlap with poultry facilities. USGS scientists and partners are also studying the ability of North American duck species to become infected with avian influenza as well as their ability to carry and spread these viruses across the landscape.

Research was led by the USGS and done in collaboration with the U.S. Department of Agriculture, University of Maryland, Environment and Climate Change Canada, Louisiana Department of Wildlife and Fisheries and U.S. Fish and Wildlife Service.

View a USGS animation of blue-winged teal migration across the U.S. from 2013 to 2016 at https://alaska.usgs.gov/products/data/tracking/tracking.php?groupid=4. 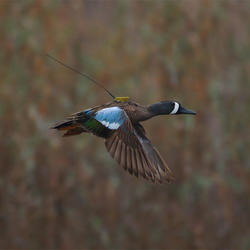 Available here are tracking data of Blue-winged Teal, a duck species that breeds throughout much of North America and whose wintering range includes neotropical areas of the Caribbean and Central and South America, thus providing a migratory link between the continents of North and South America. These data were collected to better understand the timing and patterns of migratory movement of Blue...
By
Alaska Science Center
link
September 9, 2019

Available here are tracking data of Blue-winged Teal, a duck species that breeds throughout much of North America and whose wintering range includes neotropical areas of the Caribbean and Central and South America, thus providing a migratory link between the continents of North and South America. These data were collected to better understand the timing and patterns of migratory movement of Blue...
Learn More
July 26, 2021

Louisiana Department of Wildlife and Fisheries