The Samoa tsunami of September 29, 2009, was the fifth tsunami studied by U.S. Geological Survey (USGS) field teams in 15 years, and yet it presented many surprises.

The Samoa tsunami of September 29, 2009, was the fifth tsunami studied by U.S. Geological Survey (USGS) field teams in 15 years, and yet it presented many surprises. The tsunami was generated by a magnitude 8.1 earthquake that occurred about 190 km southwest of American Samoa at 6:48 a.m. Samoa Standard Time. The generating earthquake was different from those that most commonly trigger tsunamis, and the tsunami itself was striking in several ways, including the variability of its impacts, the effects of coral reefs on inundation, the evidence of a strong return flow, and the effectiveness of education in reducing deaths and injuries.

Tsunami scientists go to areas hit by tsunamis as soon as possible to collect ephemeral data before it is degraded or destroyed by cleanup activities or natural processes. USGS teams collected data in American Samoa from October 5 to 22 and November 5 to 12, 2009, and in Samoa from October 14 to 22, 2009. The tsunami was large; in some areas, the water reached elevations greater than 15 m above sea level. However, wave heights and damage varied from village to village. Even within villages, some structures were completely destroyed, some flooded but left standing, and others barely touched.

The teams also measured topography and bathymetry near the shore, including reef-flat elevations. They collected sediment samples and documented the distribution and characteristics of both sand and boulder deposits. Eyewitness accounts of the tsunami were videotaped for use in educational materials.

One striking feature of the Samoa tsunami was that it was almost as large on the "lee" side of the island of Tutuila, American Samoa, as it was on the side facing the southwest where the tsunami was generated. Because tsunamis have long wavelengths (as much as hundreds of kilometers), they are affected by the depth of the water they traverse from the time they are generated until they inundate land. They slow down where the water is shallower, causing their crests to bend (refract) toward the shallowest areas. As a result, tsunami waves change direction as underwater topography refracts their travel path. The refraction caused by underwater topography can also focus the tsunami energy. Refraction and possibly other effects (including interference of reflected waves and generation of "edge" waves, which travel parallel to shore) resulted in the large wave heights on the north and east coasts of Tutuila.

Coral reefs may have affected the height of the tsunami onshore. Fringing reefs surround much of American Samoa and Samoa. Field measurements indicate that the tsunami was largest onshore of channels that cut through the reefs. Reefs and, in general, the shape of the nearshore seafloor are known to affect tsunami inundation. However, because of complicated interactions between the wave and seafloor features, it is difficult to predict exact effects. This complexity, along with the tremendous potential to help communities plan for tsunami hazards, makes tsunami-inundation modeling both challenging and intensely interesting to researchers. USGS scientists Alex Apotsos and Guy Gelfenbaum ran tsunami-inundation computer models in the field in American Samoa to understand the effects of reefs. Detailed tsunami-inundation modeling is an active area of research for USGS scientists, whose goals include determining under what conditions coral reefs mitigate or enhance tsunamis' destructive effects.

Another striking aspect of this tsunami was the abundant evidence of strong return flow. For example, at Poloa on the northwest coast of Tutuila, where the runup was greater than 11 m along a 300-m stretch of coast and flow depths exceeded 4 m, the coral-reef flat was strewn with debris, including chairs, desks, and books from a school located about 30 m from the shoreline. On other parts of the islands, river channels were excavated and new channels formed as return flow scoured sediment and transported it offshore. A primary cause for the strong return flow is the steepness of the terrain. In many places, the tsunami hit cliffs instead of running farther inland. The combination of trapped water and gravity resulted in strong offshore flows. Another possible cause for the strong return flow is the shape of the waves in the tsunami wave train; this factor is being investigated using hydrodynamic models.

The people of American Samoa and Samoa did the right thing after they felt the early morning earthquake—they self-evacuated from the coast to higher ground in the 10 to 15 minutes before the tsunami arrived. Some fled as soon as the ground stopped shaking; others fled when they saw the sea withdraw from the shore. Had residents not evacuated, the fatalities would likely have been in the thousands instead of fewer than 200. This instance of self-evacuation underscores that education saves lives. Recent tsunami-education briefings and school drills—based on knowledge obtained after the devastating Indian Ocean tsunami of December 26, 2004—were critical in preventing greater loss of life. Similar educational efforts could benefit coastal residents in other countries, including the United States.

Each scientist who goes to an area devastated by a tsunami has a unique experience, but all are moved by the evidence of human loss. There is no better way to learn about a tsunami than to go quickly to a stricken area and collect ephemeral data before it is lost, but there is a price to pay for gathering this knowledge. While collecting data in American Samoa, I came across a small shrine on the foundation of the destroyed house of three girls who had died in the tsunami. The shrine contained pictures of the girls smiling, their sparkly shoes, and their teddy bears. Being the father of a young girl, I found it difficult to continue working, but I did. Like other scientists working in the aftermath of a tsunami, I suppressed my reaction and concentrated on collecting data needed to improve our understanding of tsunamis. The thought that the work we do helps to save lives focused our tsunami survey teams on the task at hand. At the opposite end of the emotional spectrum, we also experienced the joy of helping. Many people, including local officials and villagers alike, wanted to know more about this tsunami and to understand the risk from future tsunamis. We tried to answer their questions and felt glad to know that our research will help them, and other communities, plan for future tsunamis.

The USGS scientists who have participated so far in tsunami surveys on American Samoa and Samoa are (in alphabetical order by last name): Alex Apotsos, Mark Buckley, Guy Gelfenbaum (team leader in American Samoa), Bruce Jaffe, Bruce Richmond (team leader in Samoa), Andrew Stevens, and Steve Watt. To learn more about their activities and observations, visit the page "USGS Scientists in Samoa and American Samoa Studying Impacts of Tsunami in 2009" which includes written observations, numerous photographs, and selected interviews with survivors.

For more insights into how data collected after tsunamis are used to benefit coastal communities, listen to a podcast interview with Bruce Jaffe titled, "Tsunami Research Keeping People Safe."

To learn more about how the September 29 tsunami was generated, and to view computer animations of its propagation through the open ocean, visit "Preliminary Analysis of the 2009 Samoa Tsunami." 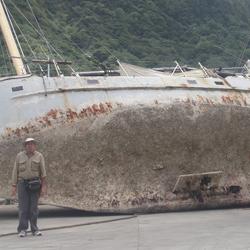 On September 29, 2009, an M 8.1 earthquake in the Samoa Islands region of the South Pacific Ocean caused a tsunami that resulted in 100's of lost lives. A rapid-response team of USGS scientists traveled to the Samoa Islands in October-November 2009 to collect time-sensitive data that would have been quickly degraded or destroyed by recovery activity and natural processes.
By
Natural Hazards, Coastal and Marine Hazards and Resources Program, Pacific Coastal and Marine Science Center
link
December 1, 2009

On September 29, 2009, an M 8.1 earthquake in the Samoa Islands region of the South Pacific Ocean caused a tsunami that resulted in 100's of lost lives. A rapid-response team of USGS scientists traveled to the Samoa Islands in October-November 2009 to collect time-sensitive data that would have been quickly degraded or destroyed by recovery activity and natural processes.
Learn More