There was 7 % more irrigated land in the U.S. in 2017 than there was in 2002. The biggest gainers were the Missouri, and Upper and Lower Mississippi river basins, with losses in California and the Texas-Gulf Coast.

Those are just a few of the conclusions drawn in a recently released study from the USGS Earth Resources Observation and Science (EROS) Center that analyzed change in irrigated lands in the United States at the field scale from 2002 through 2017.

It’s a companion study to the latest update to the MODIS Irrigated Agriculture Dataset (MIrAD), a nationwide, geospatially explicit map of irrigation status that has its roots in a drought monitoring effort born nearly two decades ago at USGS EROS.

So far, MIrAD has produced four snapshots of the Nation’s irrigated lands, for the years 2002, 2007, 2012, and 2017. The MIrAD team is now proposing a strategy that will move to annual, higher-resolution releases in the future.

The interest for such a project is apparent. The first published MIrAD study has been cited nearly 100 times, and efforts to map irrigated lands have expanded significantly in recent years.

Interest wasn’t always quite so high. USGS EROS Research Geographer Jesslyn Brown began to contemplate a project like MIrAD around 2002. Brown cut her remote sensing teeth on drought monitoring and was working to build an approach for monitoring water-related plant stress based on satellite data. That project, which evolved into VegDRI which came to inform the U.S. Drought Monitor, needed to account for irrigated croplands in order to be trustworthy, but there was a problem. The irrigation map data available at the time wasn’t spatially explicit.

The U.S. Department of Agriculture (USDA) tallied irrigation county-by-county through its Census of Agriculture, but that data didn’t play well with satellite observations in monitoring.

“In 2001, there wasn’t any spatially distinct information on irrigation in the United States—where the spatial pattern of irrigation is—that was more realistic across the landscape than county boundaries,” Brown said.

So Brown and her team had to build the data set themselves. They combined the county-level USDA Census data with spatially-explicit data from the USGS National Land Cover Database and the USDA’s National Agriculture Statistics Service (NASS) to pinpoint irrigated crops, which helped VegDRI’s drought stress maps make sense of areas with low rainfall and high plant productivity. Shariar Pervez, a contractor at USGS EROS, wrote the original code for MIrAD.

A satellite image that records reflected light can’t distinguish a healthy field fed by irrigation water from one fed by a raincloud, Brown explained. Sorting irrigated from rain-fed fields was essential to mapping the country on the weekly basis for drought monitoring.

“MIrAD is a story of necessity being the mother of invention,” Brown said. “When we started working on VegDRI, we realized fairly quickly that if you are trying to model vegetation stress and you don’t account for irrigation, you have a problem. Reflectance of an irrigated cornfield versus a rainfed corn field can be very, very similar except in drought conditions”.

Since then, MIrAD has proven its worth beyond drought monitoring. The availability of multiple years allows for the tracking of trends and changes in irrigation patterns over time, and it can be combined with other data sources to look at specific local or regional questions. The pace of such work has picked up, with  42 % of MIrAD’s citations appearing in the scientific literature in the past two years.

“It was kind of surprising that there was nothing there in 2002, but when you look at what’s out there in the literature now, there’s so much more interest in mapping irrigation,” Brown said.

The new study, authored by USGS EROS contractor Dinesh Shrestha and co-authored by Brown, is titled “Exploring the Regional Dynamics of U.S. Irrigated Agriculture from 2002 to 2017.” It divides the country up by major watershed to look for trends in irrigation.

The California watershed lost around 11 % of its irrigated land during the time period, which was marked by a loss in surface and ground water availability. Meanwhile, the Missouri and Lower Mississippi river basins had plentiful water supplies for irrigation during the study period and added acres of watered land. About 26 % of the Nation’s irrigation takes place in the Missouri River Basin, which saw a 12.6 % jump in irrigated acres as states like Nebraska added new wells and farmers across the basin took advantage of improved irrigation techniques.

Accuracy ranged between 70% and 95%, depending on the region.

The study and its snapshot-comparison conclusions on irrigation trends represents both an ending and a beginning for MIrAD. It’s the last time the project will use coarser-resolution MODIS data, as well the last time users will see a 5-year gap between data releases.

“In the future, we are looking to use Landsat at 30-m, and we’re also looking at producing irrigated land annually, rather than every five years,” said Shrestha.

What that looks like in practice is still an open question. MIrAD could be folded into the USGS Land Change Monitoring, Assessment, and Projection (LCMAP) initiative, for example. LCMAP currently offers 10 mapping products that characterize landscapes across the U.S. every year from 1985-2019 and updates at an annual clip. MIrAD could also be a companion product, informing LCMAP products and vice versa.

That’s the direction satellite-based irrigation mapping is now heading, both in and out of the USGS EROS Center that pioneered the work with MIrAD.

“It could go either way,” Brown said. “It’s possible that if that LCMAP doesn’t initiate moving this forward, someone else will. There are other related activities in USGS and elsewhere to understand rain-fed and irrigated croplands.”

Researchers at the University of Wisconsin-Madison recently waded into Landsat-based irrigation mapping using a commercial cloud computing environment, releasing a study covering 1997-2017. Others are looking to global irrigation mapping.

Discussions on the future of MIrAD will continue to build on its past and look to the future, Brown said, with an eye to continuous improvement.

“No data set is perfect. In science, we build on what’s been done before, and that’s what’s going on here,” Brown said. 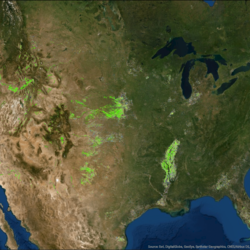 The Moderate Resolution Imaging Spectroradiometer (MODIS) Irrigated Agriculture Dataset for the United States (MIrAD-US) suite of irrigation products was developed by the U.S. Geological Survey (USGS) Earth Resources Observation and Science (EROS) Center. The goal of MIrAD is to provide a comprehensive and consistently processed geospatial dataset for irrigated agriculture across the conterminous...
Learn More
link 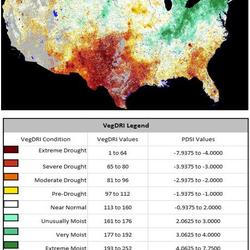 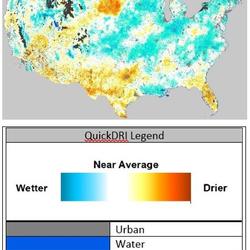 Weekly geospatial model and dataset that is an indicator of short-term dryness across the conterminous United States (CONUS). Quick Drought Response Index (QuickDRI) is designed to have improved sensitivity to early-stage drought conditions and rapidly evolving drought events.
Learn More