A lot of heat is released from Earth's surface at Yellowstone. The evidence of this heat flow includes thermal features like hot springs, geysers, mud pots, and fumaroles.

Tracking the temperatures and sizes of thermal areas is critical for monitoring Yellowstone's hydrothermal activity, and also for understanding and preserving these spectacular features. But how do scientists accomplish this task, given that there are more than 10,000 individual thermal features spread out over a large and mostly inaccessible area within Yellowstone National Park?

The characteristics of Yellowstone's thermal features change with time, due to both natural processes and human activities. For example, as was discussed last week, there are occasional thermal disturbances at Norris Geyser Basin that are characterized by increased ground temperatures, changes in the eruption frequency and discharge rates at geysers and hot springs, and sometimes the formation of new features. In 2003, a portion of the hiking trail around Norris Geyser Basin was temporarily closed for safety reasons due to increased ground temperatures in areas near the trail that were previously cool.

Various human activities can also impact Yellowstone's thermal features, including vandalism (throwing objects into the thermal features) and the development of infrastructure (buildings, roads, and boardwalks). To recognize changes and understand the causes, we must continuously monitor these thermal areas.

Everything that has a temperature emits energy into its surroundings, and the characteristics of this emitted energy are primarily a function of the object's temperature. This is the basis for how we can measure the temperature of a surface without being in contact with it—a technique called thermal infrared remote sensing.

One of the advantages of satellite-based thermal infrared remote sensing is that you can view nearly all of the thermal areas in the Park at once. But there also challenges and limitations to satellite remote sensing. For example, the temperature of Yellowstone's thermal areas is often not much higher than the temperature of the surroundings during the day because the Sun heats the Earth's surface. Using thermal infrared images that are acquired at night minimizes the influence of the Sun, allowing us to estimate just the geothermal component of the temperature.

Another technical challenge is that thermal infrared images from satellites tend to have low spatial detail. For example, the ASTER (Advanced Spaceborne Thermal Emission and Reflection Radiometer) instrument on board NASA's Terra satellite records thermal infrared images with pixels that are 90 meters (about 300 feet) on a side. In other words, the largest thermal feature in the Park, Grand Prismatic Spring, is about the size of a single pixel. Nevertheless, ASTER thermal infrared images of Yellowstone have enough detail to make thermal area maps that are comparable to maps made from ground-based work. This is especially important because satellite images can provide information about areas that are not easily accessible.

Overall, research in thermal infrared remote sensing of Yellowstone has helped assess and update maps of the Park's thermal areas, created new thermal anomaly maps, estimated the geothermal heat output, and established background thermal patterns. Examination of how these maps change over time will provide important evidence for how both natural and human-induced processes affect some of Yellowstone's most iconic features. 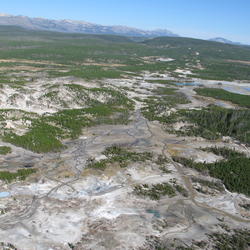