One of the qualities that sets the Climate R&D program apart from other programs in USGS is the fact that it funds a substantial amount of paleoclimate/paleoecology research. USGS scientists are at the cutting edge of developing new paleo methods for expanding our understanding of past climate, which can help inform mechanisms underpinning past and potential future ecosystem and resource change leading to improved models of future climate. Here we feature three examples of innovative paleo approaches developed by USGS scientists and their colleagues: (1) dating ice cores from ice patches; (2) measuring yearly growth layers in clamshells; and (3) combining paleo data with Indigenous Tribal Ecological Knowledge (ITEK).

Dr. Greg Pederson is developing methods for coring and dating ice patches so that thousands of years of incremental ice accumulation can be used to reconstruct past cool-season climate. Previously, only large glaciers and ice sheets have been cored, but those are limited to polar regions or produce short records (in the case of glaciers) due to ice transport. Ice patches, on the other hand, have a near global distribution in high mountain areas and can produce long records to develop a better understanding of Holocene climate variability. As in other ice cores, oxygen isotopes from the ice help to explain past climate conditions. Using a novel approach, scientists are developing accurate age-depth models by radiocarbon dating organic material in the ice cores despite being unable to count annual layers in the ice - the more traditional method used on polar ice cores. Since ice patches are widely distributed around the world, this new method and proxy data source may make it possible to better understand millennial-scale changes in climate over the Holocene for critical high-elevation ecosystems and water resource generating regions.

In the marine environment, the opposite geographic constraint has been true. In paleo studies, tropical corals are one of the most valuable archives for reconstructing annually-resolved marine climate. At higher latitudes outside the tropics, marine paleoclimate is more often inferred from more readily accessible terrestrial-based archives, like tree-rings and ice cores, or decadally-resolved archives like ocean sediments. To address this, Dr. Madelyn Mette (2021) is applying novel methods using shells from ocean quahogs (clams) to reconstruct annual marine paleoclimate at high latitudes. Some clams are very long-lived (hundreds of years), and each year the clams create a new growth layer in their shells, analogous to tree rings. The chemical composition of the shell layers, particularly the oxygen isotope ratio, can be used to reconstruct historic sea surface temperatures. Because of the unique bar-code-like growth pattern of the annual layers, dead-collected shells can be precisely dated by overlapping (matching) the pattern with live-collected shells, enabling the construction of very long shell-growth chronologies that go back hundreds or even thousands of years.

These first two innovative paleo methods are expanding where on the planet we can gather paleo data to understand past climate, but we can also combine paleo data with other ways of knowing to improve our understanding of past climate. For example, Dr. Clarke Knight and her colleagues combined Indigenous Tribal Ecological Knowledge (ITEK) based on the oral histories of the Karuk and Yurok Tribes with paleo data from pollen, tree fire scars, and sedimentary charcoal in order to better understand fire history and forest conditions over the last millennium in northwestern California. Under the Karuk Tribe’s Practicing Pikyav policy, the paleo scientists and tribal communities developed a research proposal that specified the scientists’ research interests and how the collaboration would honor tribal intellectual property, data sharing, and reciprocity requests. The proposal underwent tribal review and approval. During the writing process, the Tribe was able to contribute valuable knowledge at their comfort level and provide comments on any aspect of the document. After publication, the scientists participated in workshops to share findings with the Tribe and community members and Tribal communication liaisons were included in media requests to ensure their participation in broader messaging of the research. This process demonstrated that engagement with Tribal partners is a key part of paleoecological research that implicates Indigenous people.

Weaving ITEK with analysis of paleo data can strengthen data interpretations and ultimately improve conservation policy and land management. Of note, the study demonstrated the strong influence of Indigenous stewardship on forest conditions in northern California for at least a millennium. Indigenous burning practices coupled with lightning-induced fires kept forest carbon low, at approximately half of what it is today, and kept forests more open and less dense, which enhanced the resiliency and health of the fire-prone forests of northern California. However, colonization and twentieth century fire suppression policies have densified California forests, making them more prone to catastrophic large wildfire than in the past.

If you are interested in keeping up with the exciting research of the Climate R&D program, please sign-up for the biannual newsletter. 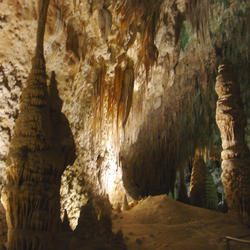 Lessons from the Past, Roadmap for the Future The present-day climate of the Earth is influenced by a combination of natural climate variability, increased concentrations of greenhouse gases in the atmosphere since the Industrial Revolution, and changes in land cover (such as conversion from forest to agriculture and back again).
By
Climate Research and Development Program
link
January 31, 2022

Lessons from the Past, Roadmap for the Future The present-day climate of the Earth is influenced by a combination of natural climate variability, increased concentrations of greenhouse gases in the atmosphere since the Industrial Revolution, and changes in land cover (such as conversion from forest to agriculture and back again).
Learn More
March 14, 2022

For millennia, forest ecosystems in California have been shaped by fire from both natural processes and Indigenous land management, but the notion of climatic variation as a primary controller of the pre-colonial landscape remains pervasive. Understanding the relative influence of climate and Indigenous burning on the fire regime is key because contemporary forest policy and management are informe
By
Climate Research and Development Program, Geology, Minerals, Energy, and Geophysics Science Center
June 9, 2021

Paleoclimate records from ice cores generally are considered to be the most direct indicators of environmental change, but are rare from mid-latitude, continental regions such as the western United States. High-elevation ice patches are known to be important archaeological archives in alpine regions and potentially could provide records important for Earth System Model evaluation and to understand
By
Ecosystems, Climate Research and Development Program, Northern Rocky Mountain Science Center
link
May 1, 2022

This article is part of the Spring 2022 issue of the Earth Science Matters Newsletter.

This article is part of the Fall 2021 issue of the Earth Science Matters Newsletter.