These figures are derived from USGS experts' preliminary review of USGS low-altitude before-and-after images along the coast and NOAA photographs collected after the storm.

Hurricane Matthew’s storm surge and waves overwashed 177 miles of beach dunes in four states—about 11% of the sand dunes on Florida's Atlantic Coast, 30% along Georgia’s coastline, 58% of dunes on South Carolina’s sandy beaches, and 9% of North Carolina's dunes as the powerful storm brushed past the southeastern states October 6–9, 2016. These figures are derived from USGS experts' preliminary review of USGS low-altitude before-and-after images along the coast and NOAA photographs collected after the storm.

“The hurricane's impact on southeastern shorelines was less extensive than a pre-storm prediction, which called for 24% of Florida’s Atlantic Coast to be overwashed by the storm surge,” said USGS research oceanographer Joseph Long. “That forecast was based on a worst-case scenario, the maximum waves forecast by the National Hurricane Center striking the coast simultaneously with the maximum storm surge.”

Long and his fellow scientists on the USGS National Assessment of Coastal Change Hazards storm team, headed by research oceanographer Hilary Stockdon, are working on a detailed assessment of Matthew’s effects on the region’s vulnerable shorelines. They are now comparing low-altitude, oblique aerial photos taken in September 2014 to photos collected October 13–15, about a week after the storm.

“High-altitude images give us a big-picture view of the coastline, and that’s very useful to identify large areas of overwash, but we can’t see the dunes in those images,” Long said. “These low-altitude photos give us a clear view of the dune itself. We can see whether the storm surge altered or eliminated that protective barrier, and what happened to the houses and boardwalks and seawalls behind it.”

When a storm is about to strike the U.S. Atlantic Coast, the team predicts the likelihood of coastal erosion and other changes, using a computer model that incorporates the National Hurricane Center’s storm-surge predictions and NOAA wave forecasts. The USGS model adds information about the beach slope and dune height to predict how high waves and surge will move up the beach.

The model forecasts three types of storm impact to the dunes that protect coastal communities: erosion, overtopping, and inundation (flooding that reaches over and behind the dunes). After a storm has passed, the researchers test the model’s accuracy using information about the state of the dunes from before-and-after photographs and other data.

In Florida, the state that had the closest brush with Matthew, an estimated 64 kilometers (40 miles) worth of dunes and other coastal structures were overtopped. A preliminary review found 52 kilometers (32 miles) worth of shoreline in Georgia and 121 kilometers (75 miles) in South Carolina were overwashed, mostly in lightly populated areas. In North Carolina, the hurricane’s impacts were dominated by heavy rainfall that led to inland flooding, but storm tides also overtopped about 48 kilometers (30 miles) of dunes, according to the team's preliminary analysis.

The images clearly capture the damage at Florida’s Vilano Beach, north of St. Augustine, where the storm surge and wave runup washed away a five-meter-high (16-foot) sand dune, destroying boardwalks and decks of oceanfront homes. South of St. Augustine, the storm surge opened up a new inlet between the Atlantic Ocean and the Matanzas River, stripping away a 3.7-meter-high (12-foot) dune and carrying most of its sand into the estuary. And farther south in the town of Flagler Beach, the powerful waves washed away a portion of Highway A1A, closing the beachfront highway indefinitely, and obliterated a 5.2-meter-high (17-foot) dune.

The U.S. Army Corps of Engineers, in collaboration with the USGS, is conducting a month-long series of data collection flights along the southeastern U.S. coast using airborne lidar, a technology that bounces beams of laser light at the ground to produce detailed elevation information about the surface below. Using that information, the USGS researchers can estimate the volume of sand that Hurricane Matthew moved off of southeastern beaches, measure the height and breadth of the remaining dunes, and be ready to forecast the erosion potential of the next storm. 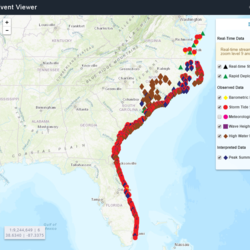 Hurricane Mathew was a Category 5 storm that caused widespread destruction from Sept. 28 to Oct. 10, 2016, in the southeastern U.S., the Bahamas, and the Greater Antilles.
By
Water Resources
link
February 26, 2019

Hurricane Mathew was a Category 5 storm that caused widespread destruction from Sept. 28 to Oct. 10, 2016, in the southeastern U.S., the Bahamas, and the Greater Antilles.
Learn More
link

This project focuses on understanding the magnitude and variability of extreme storm impacts on sandy beaches. The overall objective is to improve real-time and scenario-based predictions of coastal change to support management of coastal infrastructure, resources, and safety.
Learn More
link
December 30, 2016