On August 23, 2011 tens of millions of people along the East Coast suddenly felt the earth shaking from the largest earthquake in the eastern U.S. since the M5.8 earthquake in 1944 near Cornwall and Massena, New York.

The M5.8 earthquake occurred near Mineral, Virginia, and provided scientists with a rare opportunity to record, observe, and analyze data that had previously not been available for this part of the U.S. It was widely felt--from Maine to Georgia, west to Cincinnati, Cleveland, and Chicago, and southeastern Canada--over a broad area inhabited by one-third of the U.S. population. When the earth stopped shaking, more than 148,000 people reported their experience of the earthquake on the USGS Did You Feel It? (DYFI) site. The total economic losses from the earthquake were about $200-$300 million, which included millions of dollars in damage to the National Cathedral, the Armed Forces Retirement Home, and the Washington Monument in Washington D.C., as well as minor to major damage to almost 600 residential properties.

Earthquakes in the Eastern US

Unlike California, which is situated on the western edge of the North American plate grinding along the very active San Andreas fault, the East Coast of the U.S. is on part of the North American tectonic plate that has been relatively passive during recent geologic time. While the rate of earthquakes is lower central and eastern U.S. than in the western U.S., earthquakes are not uncommon.

The earthquake occurred in what scientists refer to as the “Central Virginia Seismic Zone”, a region characterized by low-level seismicity since at least 1774. The zone extends east-west about 120km from the Fall Line to Blue Ridge and is about 100km wide in the north-south direction. Scientists who study eastern and central North America earthquakes often work from the hypothesis that modern earthquakes occur as the result of slip on pre-existing faults that were formed in earlier geologic eras and that have been reactivated under the current stress conditions. However, even though several small earthquakes are recorded each month in the Eastern U.S., there are usually not enough events to map out and associate them with a specific fault, so the hypothesis had not been well tested. For the fault that ruptured, however, geologic boundaries imaged above and below the fault do not show evidence for large displacement, which suggests that the fault may not fit the reactivation model and instead may be a relatively new fault.

What Happened? Did You Feel It?

The M5.8 earthquake initiated near the town of Mineral, Virginia, about 65 km northwest of Richmond, Virginia at a depth of about 6-8 km. The shaking was felt by approximately one-third of the U.S. population, and there were reports that it caused minor damage as far away as Charleston, South Carolina, roughly 600km from the epicenter. The shaking caused the first ever shutdown of a U.S. commercial nuclear power plant at the North Anna nuclear power facility located about 23km northeast of the epicenter. Raw DYFI data suggest some general patterns, including significant apparent amplification of seismic waves along Chesapeake Bay, in parts of the District of Columbia (D.C.) and elsewhere, as well as a southwest-northeast directionality to the earthquake rupture and more efficient seismic wave propagation along the predominantly SW-NE-trending geologic structure.

Groundwater level changes (most <15 cm) were recorded at 48 wells as far as 550km from the epicenter, and the 40 3-component seismometers and 200 1-component seismometers, which were all deployed within about one week after the mainshock, provided the best-recorded aftershock sequence ever in the eastern U.S.

No evidence of surface rupture has been found, but there were small sand boils identified near the epicenter caused by strong shaking as well as rock falls up to 245 km away. (For comparison, a M5.8 in the western U.S. will usually cause rock falls up to about 70km.) This reveals the extraordinary distances that damaging ground shaking can extend in eastern North America – about 10 times further than damaging or felt shaking extends in western North America. This discrepancy is due to the older and denser rocks of the earth's crust on the East Coast that seismic waves can travel through more efficiently without losing energy.

What We’ve Learned from the Earthquake

The August 23, 2011 earthquake marked the first time scientists were able to associate seismic activity in the area with a particular fault since it was large enough to produce enough aftershocks to delineate the causative fault. Moderate to large earthquakes are infrequent in the Central and Eastern U.S., and many of the largest ones occurred before scientists deployed seismographs to record them. What we do know is from historical accounts; past earthquake magnitudes have been estimated by comparing recent measured earthquake magnitudes and modern accounts of shaking intensity with the historical accounts of reported intensities. Reported experiences for this earthquake provided data that can be used to more accurately estimate the shaking distribution from moderate-to-large future earthquakes in this area, as well as help us better estimate the magnitudes of older historical events with fewer historical accounts. Indeed, this earthquake reminded us that damaging earthquakes, though infrequent, are a part of living in the eastern United States.

A list of highlights of the scientific findings so far includes:

Ultimately, scientific studies of this earthquake have helped scientists confirm with empirical data what they were previously able to only estimate or model from the sparse data and smaller earthquakes in this area.

Did You Feel It?
Shaking from the earthquake reported by citizen scientists.

Below are videos and podcasts associated with this project. 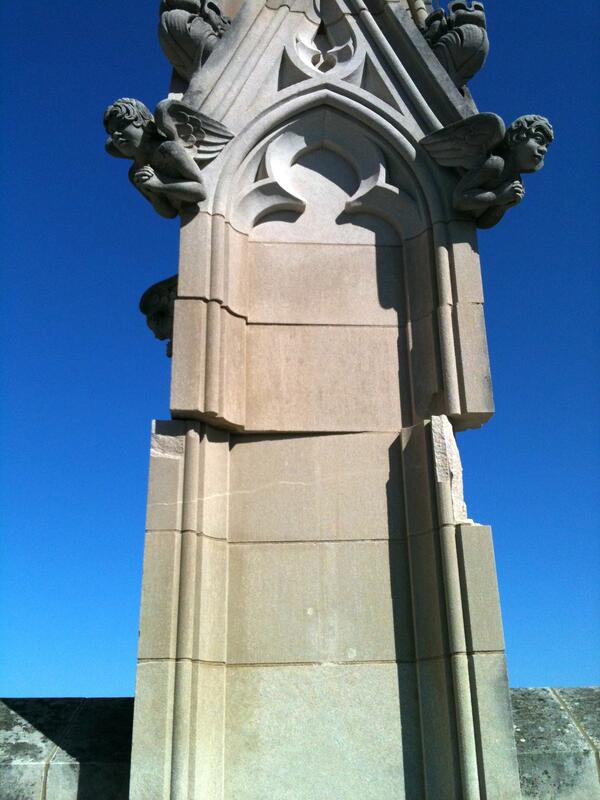 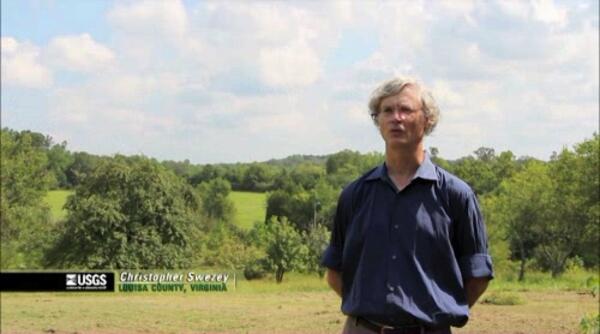 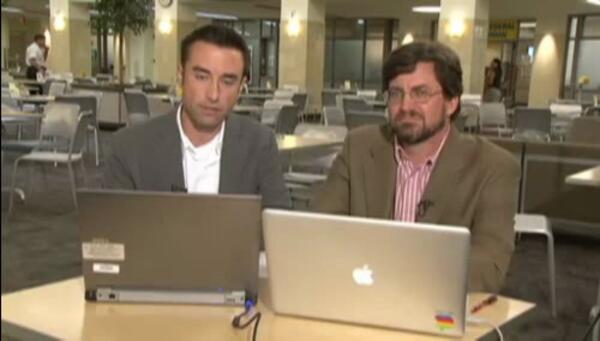 Ground shaking due to earthquakes in the eastern United States (EUS) is felt at significantly greater distances than in the western United States (WUS) and for some earthquakes it has been shown to display a strong preferential direction. Shaking intensity variation can be due to propagation path effects, source directivity, and/or site amplification. In this paper, we use S and Lg waves recorded
By
Natural Hazards, Earthquake Hazards, Geologic Hazards Science Center
January 1, 2014

The 2011 Mineral, Virginia, earthquake and its significance for seismic hazards in eastern North America: overview and synthesis

The 23 August 2011 Mw (moment magnitude) 5.7 ± 0.1, Mineral, Virginia, earthquake was the largest and most damaging in the central and eastern United States since the 1886 Mw 6.8–7.0, Charleston, South Carolina, earthquake. Seismic data indicate that the earthquake rupture occurred on a southeast-dipping reverse fault and consisted of three subevents that progressed northeastward and updip. U.S. G
By
Florence Bascom Geoscience Center
August 5, 2013

The 2011 Virginia earthquake: what are scientists learning?

Nearly 1 year ago, on 23 August, tens of millions of people in the eastern United States and southeastern Canada were startled in the middle of their workday (1:51 P.M. local time) by the sudden onset of moderate to strong ground shaking from a rare magnitude (M) 5.8 earthquake in central Virginia. Treating the shaking as if it were a fire drill, millions of workers in Washington, D. C., New York
By
Natural Hazards, Water Resources, Earthquake Hazards, Geologic Hazards Science Center
January 1, 2013

The 23 August 2011 Mineral, Virginia, earthquake (Mw 5.8) was the largest to strike the eastern U.S. since 1897 and was felt over an extraordinarily large area. Although no large landslides occurred, the shaking did trigger many rock and soil falls from steep river banks and natural cliffs in the epicentral area and from steep road cuts along, and northwest of, the Blue Ridge Parkway. We mapped th
By
Natural Hazards, Earthquake Hazards, Landslide Hazards, Geologic Hazards Science Center
July 7, 2012

Initial assessment of the intensity distribution of the 2011 Mw5.8 Mineral, Virginia, earthquake

The intensity data collected by the U.S. Geological Survey (USGS) "Did You Feel It?" (DYFI) Website (USGS, DYFI; http://earthquake.usgs.gov/earthquakes/dyfi/events/se/082311a/us/index.html, last accessed Sept 2011) for the Mw5.8 Mineral, Virginia, earthquake, are unprecedented in their spatial richness and geographical extent. More than 133,000 responses were received during the first week followi
By
Natural Hazards, Earthquake Hazards, Earthquake Science Center
April 28, 2006

This map summarizes two and a third centuries of earthquake activity. The seismic history consists of letters, journals, diaries, and newspaper and scholarly articles that supplement seismograph recordings (seismograms) dating from the early twentieth century to the present. All of the pre-instrumental (historical) earthquakes were large enough to be felt by people or to cause shaking damage to bu