TCE is a volatile solvent used for degreasing during the manufacture of products. TCE can enter soil, groundwater, and surface water from leaking storage tanks or from improper disposal of wastes. Once TCE reaches groundwater aquifers, it can contaminate private and public drinking water wells.

In this study, scientists sought to develop a better understanding of ways to enhance biodegradation of TCE in groundwater. The scientists conducted laboratory experiments to determine if the inhibitory effect of acetylene on biodegradation of TCE could be minimized by adding bacteria that ferment acetylene and to determine if the fermentation produces products that can support the bacteria that biodegrade TCE without a buildup of harmful products such as vinyl chloride.

This study is part of a long-term goal of the Environmental Health Program to provide the science needed to understand how to economically and effectively minimize the actual, as opposed to the perceived, risk to the health of humans and other organisms exposed to contaminants in groundwater resources used for drinking water. 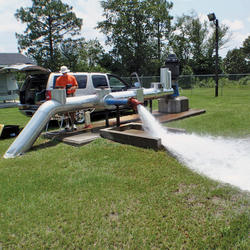 Acetylene (C2H2) can be generated in contaminated groundwater sites as a consequence of chemical degradation of trichloroethene (TCE) by in situ minerals, and C2H2 is known to inhibit bacterial dechlorination. In this study, we show that while high C2H2 (1.3 mM) concentrations reversibly inhibit reductive dechlorination of TCE by Dehalococcoides mccartyi isolates as well as enrichment cultures con
By
Water Resources