Aerial image of an oil spill

More than thirty years after an oil spill, hydrocarbons measured in groundwater near Bemidji, Minnesota, have been depleted between 25 and 85 percent. However, some components have remained for many decades and some are expected to remain longer indicating that natural attenuation is an effective but slow process. Compounds that are sufficiently soluble and resistant to biodegradation provide a persistent continuous source to groundwater.

The Energy Science Team, within the Environmental Health Mission Area of the U.S. Geological Survey (USGS), in collaboration with State, local, university, and private industry scientists have systematically studied the natural attenuation of a crude oil spill at the National Crude Oil Spill Fate and Natural Attenuation Research Site near Bemidji, Minnesota, for more than 30 years.  The rich infrastructure of the study site and its location away from heavily populated areas has enabled numerous studies to be completed that enhance the understanding of natural attenuation processes.

Previous research at the site has shown that the oil migrated into the surficial aquifer forming a plume that has advanced in the direction of local groundwater flow. Natural attenuation, through volatilization, biodegradation, and dissolution, has resulted in changes in the chemical composition of the plume over time.

In the current study, the team determined the length of time needed for natural attenuation of a broad suite of hydrocarbons in the spilled oil. The results of these analyses were compared with previous measurements to understand the length of time that hydrocarbons remain in the surficial aquifer. The results indicate that the remediation of oil spilled at the Bemidji site by natural attenuation has been an effective but slow process (decades to centuries) that depends on the depth of oil, local topography, amount of recharge reaching the oil, availability of electron acceptors, and the soil permeability above the oil.

Although there has been significant reduction in oil mass and degradation of total measured hydrocarbons (25–85 percent) in the oil during the past 30-plus years, some components have remained for many decades and some are expected to remain longer. For example, toluene, o-xylene, n-alkanes, and benzene, some of which are known carcinogens, are estimated to be completely depleted several decades after the spill as compared to more resistant compounds such as alkylbenzenes, naphthalenes, alkylcyclohexanes, and isoprenoids that are estimated to remain for a longer period—potentially more than 100 years.

This study indicates that in sites where natural attenuation is the only remedial technique used, breakdown products can remain in groundwater for at least decades under conditions like those measured at the Bemidji field site. The abundant detailed information from this site informs mitigation efforts at half a million existing sites with confirmed releases at underground storage tanks nationwide. Many of these sites still have spilled fuel product at the water table that could be a source of contaminants to aquifers used for drinking water. 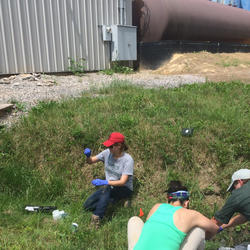 The Energy Integrated Science Team focuses on the potential for contaminant exposures in the environment that might originate from energy resource activities including, transportation, storage, extraction, waste management and restoration. Perceived health risks to humans and other organisms will be distinguished from actual risks, if any. If actual risks are identified this project will inform...
By
Ecosystems, Contaminant Biology, Environmental Health Program, Toxic Substances Hydrology
link
April 18, 2018

The Energy Integrated Science Team focuses on the potential for contaminant exposures in the environment that might originate from energy resource activities including, transportation, storage, extraction, waste management and restoration. Perceived health risks to humans and other organisms will be distinguished from actual risks, if any. If actual risks are identified this project will inform...
Learn More

Biodegradation of contaminants can increase the temperature in the subsurface due to heat generated from exothermic reactions, making temperature observations a potentially low-cost approach for determining microbial activity. For this technique to gain more widespread acceptance, it is necessary to better understand all the factors affecting the measured temperatures. Biodegradation has been occu
By
Water Resources
September 14, 2018

Weathering of oil in a surficial aquifer

The composition of crude oil in a surficial aquifer was determined in two locations at the Bemidji, MN, spill site. The abundances of 71 individual hydrocarbons varied within 16 locations sampled. Little depletion of these hydrocarbons (relative to the pipeline oil) occurred in the first 10 years after the spill, whereas losses of 25% to 85% of the total measured hydrocarbons occurred after 30 yea
By
Water Resources, Toxic Substances Hydrology, Reston Biogeochemical Processes in Groundwater Laboratory