The coral reef of South Moloka'i, Hawai'i— Portrait of a sediment-threatened fringing reef

Moloka‘i, with the most extensive coral reef in the main Hawaiian Islands, is especially sacred to Hina, the Goddess of the Moon. As Hinaalo, she is the Mother of the Hawaiian people; as Hinapuku‘a, she is the Goddess of Fishermen; and in the form Hina‘opuhalako‘a, she is the Goddess who gave birth to coral, coral reefs, and all spiny marine organisms. Interdependence between the reef’s living resources, the people, and their cosmology was the basis for management of Moloka‘i’s coastal waters for over a thousand years.

The ancient residents of Moloka‘i built the greatest concentration of fishponds known anywhere, but their mastery of mariculture, something needed now more than ever, was lost after near genocide from exotic Western diseases. Subsequent destruction of the native vegetation for exotic cattle, goats, pigs, sugar cane, and pineapple caused soil erosion and sedimentation on the reef flat. This masterful volume clearly documents that soil washing into the sea is the major threat to the reef today. Abandoned fishponds, choked with sediment, now act as barriers and mud traps, making damage to corals less than it would otherwise would have been.

The role of mud and freshwater from land in preventing coral reef growth, clearly articulated in Charles Darwin’s first book, The Structure and Distribution of Coral Reefs, is the major theme of this book. All around the tropics, coral reefs have died from huge increases in terrestrial sedimentation that resulted from destruction of hillside forests for cash-crop agriculture and pastures in the colonial era, especially in Latin America, Asia, and the islands of the Caribbean and Indo-Pacific. It is obvious that one cannot manage the coastal zone as a unit separate from the watersheds that drain into it. Yet there has been surprisingly little comprehensive scientific study of these impacts.

In this landmark volume, U.S. Geological Survey researchers and their colleagues have developed and applied a remarkably integrated approach to the reefs of Moloka‘i, combining geology, oceanography, and biology to provide an in-depth understanding of the processes that have made these reefs grow and that now limit them. They have joined old fashioned natural history of marine animals and plants with study of the geological evolution of the island, hydrology, meteorology, and land-use history, to an arsenal of new methods of remote sensing, including aerial photography, laser ranging, infrared thermal mapping, seismic reflection, in-situ instrumentation to measure chemical parameters of water quality, and direct measurements of the physical driving forces affecting them—such as wave energy, currents, sedimentation, and sediment transport. They provide a level of documentation and insight that has never been available for any reef before.

A remarkable feature of this book is that it is aimed at the people of Moloka‘i to inform them of what is happening to their reef and what they might do to preserve their vital resources. The scientific data and interpretations are expressed in unusually clear and comprehensible language, free of the professional jargon that makes most technical publications impenetrable to the public that most needs to know about them, yet without loss of scientific rigor.

Here readers will see clearly explained the whole path of soil loss, from the impacts of wild pigs and goats at higher elevations, deforestation of the hills for cattle pasture at lower levels, and denudation of low lands for cash crops. The resulting biological impoverishment has bared the soils, which wash away in flash storms, smothering the inshore reefs, whose growth was already limited because they had grown right up to sea level. The data in this book show that the mud doesn’t get far if it is washed into the sea during a big storm with heavy waves. Afterwards this mud keeps getting stirred up by every succeeding storm, spreading and affecting corals over wider areas until it is finally washed out of the system—and that only happens if there is no more new mud washing onto the reef.

I saw this myself a few years ago in Pila‘a Bay on Kaua‘i, where a bulldozed hillside of abandoned sugar cane fields had slumped right on top of a coral reef following exceptional rains. Years later, the algae species were zoned in a way that clearly mapped the distribution of nutrients washed into the bay, most likely from fertilizers bound to the eroded soils. That pattern closely mimics, on a small scale, that shown in Moloka‘i in this volume, where the inner reef is covered with algae, zoned by species in a way that points to land-based sources of nutrients, while the outermost reef slope is still coral dominated, and the deep algae seem to indicate deep-water nutrient upwelling.

What of the future? The Hawaiian Islands have been exceptionally fortunate to be spared the worst coral heatstroke death from high temperatures, at least to date. So far, the worst global warming impacts have luckily been small in this region, and the small number of people on Moloka‘i has kept population densities, and sewage pollution, low compared to the more developed islands. Nutrients from years of sugar and pineapple fertilization, and the washing of this soil onto the reefs, show clear influences on the pattern of algae on the reef. Even at very low levels of nutrients, well below that which drives algae to smother and kill coral reefs, more algae is present. Soil erosion control is therefore the key to better management of both nutrients and turbidity on Moloka‘i reefs. To that end land management actions mentioned in this book, such as suppressing wild fires and eliminating wild goats and pigs, could be made even more effective if supplemented by active erosion control using plants whose roots bind the soil effectively in place. Through all of these efforts, Hina and the people of Moloka‘i could be happy again! 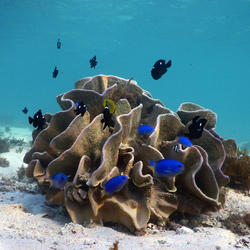 Explore the fascinating undersea world of coral reefs. Learn how we map, monitor, and model coral reefs so we can better understand, protect, and preserve our Nation's reefs.
Learn More
link 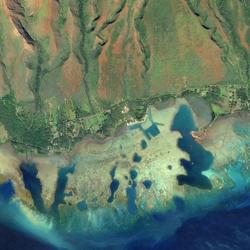 As part of the USGS Coral Reef Project, recent USGS work on Molokaʻi includes looking into the coral record to find clues to past sedimentation events.
By
Pacific Coastal and Marine Science Center
link
March 21, 2022

As part of the USGS Coral Reef Project, recent USGS work on Molokaʻi includes looking into the coral record to find clues to past sedimentation events.
Learn More
link
February 2, 2009

Coral reefs are in decline worldwide, and a leading cause of their decline is the runoff of sediment and pollutants from nearby land surfaces.