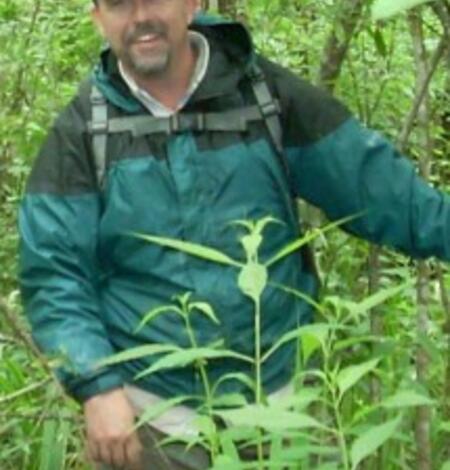 Ken Krauss is a Research Ecologist at the USGS Wetland and Aquatic Research Center.

Ken Krauss' research spans several habitats, from mangroves to tidal freshwater forested wetlands and marshes. His research takes a multi-tiered approach to understanding eco-physiological processes in coastal wetland forests; defining gas exchange between the soil and atmosphere, and among the leaf, tree, and atmosphere. Research has defined thresholds to tidal freshwater forested wetland habitat change in the face of persistent environmental drivers (esp. sea level rise and salinity), defined the potential of forested wetlands to influence water cycling in coastal areas, and has begun to establish the potential of other wetland types to contribute to water conservation, especially under drought and perennial salinization. Krauss also focuses on the vulnerability of coastal swamp forests and mangroves to sea-level rise, and on how science can inform management and restoration activity within the coastal zone.

He has been a scientist with the federal government since 1997, first with the USDA Forest Service in Stoneville, Mississippi and, then, in Honolulu, Hawaii, where he studied sedimentation, systematics, regeneration, growth, invasion biology, and ecophysiology of Pacific island forested wetlands in the Federated States of Micronesia and Hawaii. Krauss began working at the USGS National Wetlands Research Center in 2001 (renamed to USGS Wetland and Aquatic Research Center, or WARC, in 2015), where he maintains an expertise in forest ecology and ecophysiology, and serves as one of WARC's climate change scientists focusing on mangroves and tidal freshwater forested wetlands.

Low and high water periods create contrasting challenges for trees inhabiting periodically flooded wetlands. Low to moderate flood durations and frequencies may bring nutrient subsidies, while greater hydroperiods can be energetically stressful because of oxygen deficiency. We tested the hypothesis that hydroperiod affects the growth of mangrove seedlings and saplings in a greenhouse experiment by
December 31, 2005

Woody debris in the mangrove forests of South Florida

A tropical freshwater wetlands: I. Structure, growth, and regeneration

Forested wetlands dominated by Terminalia carolinensis are endemic to Micronesia but common only on the island of Kosrae, Federated States of Micronesia. On Kosrae, these forests occur on Nansepsep, Inkosr, and Sonahnpil soil types, which differ in degree of flooding and soil saturation. We compared forest structure, growth, nutrition, and regeneration on two sites each on Nansepsep and Inkosr soi
By
Ecosystems, Wetland and Aquatic Research Center
December 31, 2002

Factors influencing the regeneration of the mangrove Bruguiera gymnorrhiza (L.) Lamk. on a tropical Pacific island

Mangrove swamps occupy approximately two-thirds of the shoreline on Kosrae, Federated States of Micronesia (FSM), and also border the island's most populated areas. Kosraeans depend on mangrove swamps for a supply of wood to support a growing handicraft industry, for a dependable source of fuelwood, and for habitat to support the harvest of fish and mangrove crabs. One of the more prominent mangro
December 31, 2002

Root systems in mangrove swamps have captured the attention of scientists for decades. Among the postulated roles of root structures include a contribution to the geomorphological stability of mangrove soils through sediment trapping and binding. In this study, we used feldspar marker horizons and sediment pins to investigate the influence of three different functional root types - prop roots in R
December 31, 2002

Influences of salinity and shade on seedling photosynthesis and growth of two mangrove species, Rhizophora mangle and Bruguiera sexangula, introduced to Hawaii

Rhizophora mangle was first introduced to Hawaii in 1902 to promote shoreline stabilization. Intertidal competition with native and introduced salt marsh species was low, and beyond the early 1920s, mangrove forests expanded rapidly. An additional mangrove species, Bruguiera sexangula, was introduced in 1922 and currently co-occurs with R. mangle in only a few stands on the north shore and windwar
December 31, 2002

The tree species Xylocarpus granatum is commonly described as occurring in the upper intertidal zone of mangrove forests, but mature trees are occasionally found at lower elevations. In the Utwe River basin, on the Pacific island of Kosrae, we investigated the relative importance of several biotic and abiotic factors that may control the intertidal distribution of X. granatum. Factors we evaluated
By
Ecosystems, Wetland and Aquatic Research Center
December 31, 1999

Saltwater intrusion from the Gulf of Mexico is one important factor in the destruction of baldcypress (Taxodium distichum (L.) Rich.) swamps along the Louisiana Gulf Coast, USA. Recent restoration efforts have focused on identification of baldcypress genotypes with greater tolerance to saline conditions than previously reported. To date, salt tolerance investigations have not been conducted under
By
Ecosystems, Wetland and Aquatic Research Center
December 31, 1998

No abstract available.
By
Ecosystems, Wetland and Aquatic Research Center