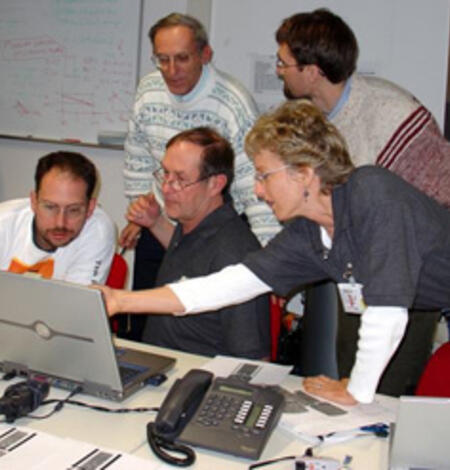 Laurence A. Soderblom is a geophysicist with the United States Geological Survey in Flagstaff, Arizona. He has been involved in numerous JPL planetary missions including the Mariner 6, 7, and 9, Viking, Voyager, Magellan, Galileo, Mars Global Surveyor, Mars Pathfinder, Deep Space 1, Cassini, Huygens, and the Mars Exploration Rovers.

From 1978 to 1996 he twice served as Chief of the Branch of Astrogeology of the United States Geological Survey. During 1983-84 he was a Sherman Fairchild Distinguished Scholar at Caltech. He attended New Mexico Institute of Mining and Technology receiving two Bachelor Degrees in geology and in physics and Caltech where he received a PhD in planetary science and geophysics. Soderblom has been engaged in a broad collection of planetary research tasks including theoretical modeling of planetary surface processes and ground-based and spacecraft instrument development. Currently he is heavily involved in the Mars Exploration Rover and the Cassini-Huygens Missions.

This paper provides an overview of Mars Exploration Rover Spirit Microscopic Imager (MI) operations and the calibration, processing, and analysis of MI data. The focus of this overview is on the last five Earth years (2005–2010) of Spirit's mission in Gusev crater, supplementing the previous overview of the first 450 sols of the Spirit MI investigation. Updates to radiometric calibration using in‐
By
Natural Hazards, Astrogeology Science Center
January 1, 2013

Photogeology: Part A: relative ages of some near-side and far-side terra plains based on Apollo 16 metric photography

The materials of most light or terra plains predate the lunar maria and postdate the Imbrian event. In the vicinity of the Imbrium Basin, these materials have been called the Cayley Formation (ref. 29-3) but because of the subtle diversity of the terra plains over the near side, Whilhelms and McCauley (ref. 29-4) simply called these materials Imbrian plains (Ip). The age relationships between the
By
Natural Hazards, Astrogeology Science Center
January 1, 2012

Hyperspectral analysis of rocky surfaces on the Earth and other planetary systems: Chapter 27

This book is focused on studies of vegetation on Earth using hyperspectral remote sensing methods. However, it is appropriate to extend the application of these methods out to other rocky bodies in our Solar System for a variety of reasons. First, minerals, soils, and rocks form the substrate on which vegetation grows on Earth. Compositional analyses of these components with hyperspectral data pro
By
Natural Hazards, Astrogeology Science Center
January 1, 2012

Titan's fluvial channels have been investigated based on data obtained by the Synthetic Aperture Radar (SAR) instrument and the Visible and Infrared Mapping Spectrometer (VIMS) onboard the Cassini spacecraft. In this paper, a database of fluvial features is created based on radar-SAR data aiming to unveil the distribution and the morphologic and spectral characteristics of valleys on Titan on a gl
By
Natural Hazards, Geology, Geophysics, and Geochemistry Science Center, Astrogeology Science Center, Spectroscopy Lab
January 1, 2011

Opportunity has been traversing the Meridiani plains since 25 January 2004 (sol 1), acquiring numerous observations of the atmosphere, soils, and rocks. This paper provides an overview of key discoveries between sols 511 and 2300, complementing earlier papers covering results from the initial phases of the mission. Key new results include (1) atmospheric argon measurements that demonstrate the imp
By
Natural Hazards, Astrogeology Science Center
January 1, 2011

We report the discovery of organic sedimentary deposits at the bottom of dry lakebeds near Titan’s north pole in observations from the Cassini Visual and Infrared Mapping Spectrometer (VIMS). We show evidence that the deposits are evaporitic, making Titan just the third known planetary body with evaporitic processes after Earth and Mars, and is the first that uses a solvent other than water.
By
Geology, Geophysics, and Geochemistry Science Center, Spectroscopy Lab
January 1, 2011

Stephan et al. (Stephan, K. et al. [2010]. Geophys. Res. Lett. 37, 7104-+.) first saw the glint of sunlight specularly reflected off of Titan's lakes. We develop a quantitative model for analyzing the photometric lightcurve generated during a flyby in which the specularly reflected light flux depends on the fraction of the solar specular footprint that is covered by liquid. We allow for surface wa
By
Geology, Geophysics, and Geochemistry Science Center, Spectroscopy Lab
October 13, 2010

Detection and mapping of hydrocarbon deposits on Titan

The identification of liquid ethane in Titan's Ontario Lacus

Titan was once thought to have global oceans of light hydrocarbons on its surface, but after 40 close flybys of Titan by the Cassini spacecraft, it has become clear that no such oceans exist. There are, however, features similar to terrestrial lakes and seas, and widespread evidence for fluvial erosion, presumably driven by precipitation of liquid methane from Titan's dense, nitrogen-dominated atm
By
Geology, Geophysics, and Geochemistry Science Center, Spectroscopy Lab
September 28, 2010

The strike and dip of lithologic units imaged in stereo by the Spirit rover in the Columbia Hills using three-dimensional imaging software shows that measured dips (15-32??) for bedding on the main edifice of the Columbia Hill are steeper than local topography (???8-10??). Outcrops measured on West Spur are conformable in strike with shallower dips (7-15??) than observed on Husband Hill. Dips are
September 28, 2010

The overall objective of this experiment is exploratory reconnaissance of Jupiter, Saturn, their satellites, and Saturn's rings. Such reconnaissance, at resolutions and phase angles unobtainable from Earth, can be expected to provide much new data relevant to the atmospheric and/or surface properties of these bodies. The experiment also has the following specific objectives: Observe and characteri
September 28, 2010

The surface of Titan has been revealed by Cassini observations in the infrared and radar wavelength ranges as well as locally by the Huygens lander instruments. Sand seas, recently discovered lakes, distinct landscapes and dendritic erosion patterns indicate dynamic surface processes. This study focus on erosional and depositional features that can be used to constrain the amount of liquids involv
By
Geology, Geophysics, and Geochemistry Science Center, Spectroscopy Lab
January 1, 1994

Geologic map of the Mare Australe area of Mars