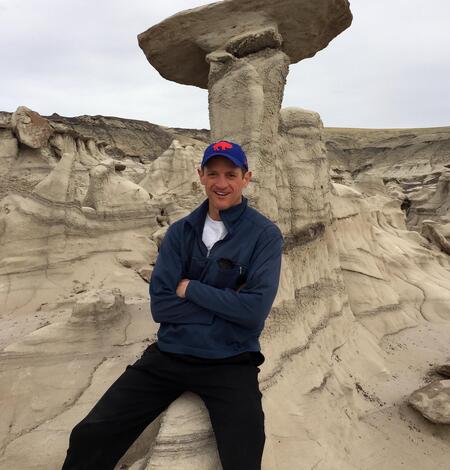 Rick Moscati began his career in Chicago as a geologist for the USEPA in 1990.  In 1991 he was hired by the USGS, Branch of Isotope Geology in Denver, and then transferred to the Yucca Mountain Project Branch (YMPB) where he conducted research from 1992 to 2010 in stable isotope and fluid inclusion studies on the history of secondary mineral deposition (largely calcite and silica) in soil and unsaturated-zone settings and as PI of the Isotope and Chemical Monitoring of Precipitation study.  Since 2010 Rick has focused on geochemical studies involving radiogenic isotopes (U, Pb, Sr, and Nd) using TIMS techniques, trace element geochemistry, and in situ (SHRIMP and LA-ICP-MS) U-Pb analyses of minerals for geochronology studies.  Among the many projects he was/is involved in, a few standout: zircon geochronology of the Proterozoic Colorado Province, the Afghanistan geochronology project, Angel Lake (Nevada), Chalk River (Ontario), the Mountain Pass REE deposit (California), and the U-Pb dating of cassiterite from many locations and geologic environments around the world including the Sullivan SedEx deposit (British Columbia), Cornwall (England), Abu Dabbab (Egypt), and Yazov (Russia).  In 2018 Rick expanded his research and joined the 40Ar/39Ar geochronology lab where he assists in method development and providing a variety of USGS and outside projects with 40Ar/39Ar age data of volcanic rocks.

Ore formation at the Spar Lake red bed-associated strata-bound Cu deposit took place across a mixing and reaction zone between a hot oxidized metals-transporting brine and a reservoir of “sour” (H2S-bearing) natural gas trapped in the host sandstones. Fluid inclusion volatile analyses have very high CH4 concentrations (≥1 mol % in most samples), and a sample from the fringe of the deposit has betw
September 14, 2011

Meteoric precipitation samples collected in 2006-09 at Yucca Mountain, Nevada, were analyzed for chemistry and stable isotope composition. Precipitation is the major source of infiltration to the unsaturated zone and of recharge to the saturated zone at Yucca Mountain. On February 28, 2005, seepage of water was observed about 40 to 80 meters below the ground surface within the Tiva Canyon Tuff in
June 13, 2011

As a consequence of contemporary or longer term (since 15 ka) climate warming, gas hydrates in some settings are presently dissociating and releasing methane and other gases to the oceanatmosphere system. A key challenge in assessing the susceptibility of gas hydrates to warming climate is the lack of a technique able to distinguish between methane recently released from gas hydrates and methane e
By
Geology, Minerals, Energy, and Geophysics Science Center, Geology, Geophysics, and Geochemistry Science Center
December 31, 2007

Secondary calcite, silica and minor amounts of fluorite deposited in fractures and cavities record the chemistry, temperatures, and timing of past fluid movement in the unsaturated zone at Yucca Mountain, Nevada, the proposed site of a high-level radioactive waste repository. The distribution and geochemistry of these deposits are consistent with low-temperature precipitation from meteoric waters
December 31, 2003

Thermochronology of secondary minerals from the Yucca Mountain unsaturated zone

Precipitation was collected between 1991 and 1997 at 41 locations within and adjacent to parts of the Great Basin lying in California, Oregon, Nevada, and Utah. These samples were analyzed for their deuterium (??D) and oxygen-18 (??18O) contents. Separate collections were made of summer and winter season precipitation at stations ranging in elevation from -65 m to 3246 m. The ??D per mil values of
January 31, 1999

Applications of isotope geochemistry to the reconstruction of Yucca Mountain, Nevada, paleohydrology; status of investigations, June 1996