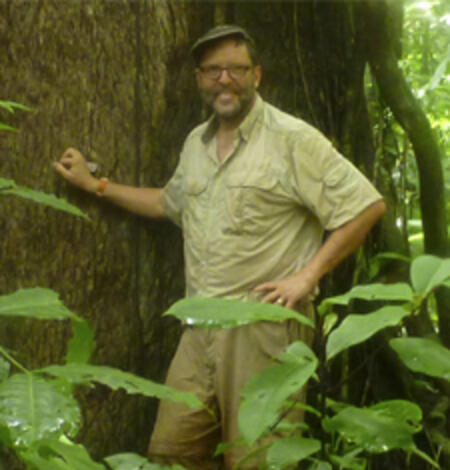 Robert Stallard has been at the USGS since 1987 and is now a Scientist Emeritus in the Hydro-Eco Interactions Branch of the Earth Systems Processing Division of the USGS Water Resources Mission Area.

Robert Stallard has been at the USGS since 1987 and is now a Scientist Emeritus in the Hydro-Eco Interactions Branch of the Earth Systems Processing Division of the Water Mission Area. He studies how land-cover and climate change affect water movement through soils, weathering, and erosion, and how these, in turn, affect the composition and dispersal of dissolved and solid phases in rivers and trace gases in the atmosphere. Areas of expertise include surface-water hydrology, major element and nutrient biogeochemistry, soil formation and sediment genesis, vegetation-landscape interaction, carbon-cycle characterization on land and in the ocean, and assessment of land-use and climate change. His work has included the study of natural and human-altered landscapes, in the Americas, Southeast Asia, and Africa, including large parts of the Amazon, Orinoco, Mississippi, and Panama Canal Basins and eastern Puerto Rico.

Most of his current efforts are committed to a multi-catchment investigations designed to distinguish the roles of vegetation, climate, and land-cover change and to put this in a hydrologic and biogeochemical framework as well as to examine ecosystem costs and services focusing on water, carbon, and biodiversity. Two projects currently consume most of his USGS time: (1) Work related to the Luquillo USGS Water, Energy, and Biogeochemical Budget (WEBB) Project in eastern Puerto Rico and parallel work in Panama, which has as a goal the comprehensive assessment of catchment hydrology and biogeochemistry in a hydrologically energetic landscapes. (2) The Agua Salud Project in the Central Panama Canal Basin examines the manifold effects of different styles of reforestation as compared to mature forested and deforested catchments. The project started in 2008 and involves 13 small watersheds with different land covers.

Despite abundant research documenting that land use/land cover (LULC) have substantial impacts on the hydrology of humid tropical systems, field-based evidence for the physical mechanisms behind these impacts are still lacking. In particular, our understanding of the hydrologic flowpaths that generate runoff in these systems, and how they vary with respect to LULC is insufficient to inform both ph
By
Water Resources
January 21, 2021

Mechanisms of runoff generation in the humid tropics are poorly understood, particularly in the context of land-use/land cover change. This study analyzed the results of 124 storm hydrographs from three humid tropical catchments of markedly different vegetation cover and land-use history in central Panama during the 2017 wet season: actively grazed pasture, young secondary succession, and near-mat
By
Water Resources
September 30, 2020

Land use in Panama has changed dramatically with ongoing deforestation and conversion to cropland and cattle pastures, potentially altering the soil properties that drive the hydrological processes of infiltration and overland flow. We compared plot-scale overland flow generation between hillslopes in forested and actively cattle-grazed watersheds in Central Panama. Soil physical and hydraulic pro
By
Water Resources
December 1, 2018

We use remote sensing to enhance the interpretation of the first baseline dataset of hydrologic, isotopic and hydrochemical variables spanning 620 km of the upper Marañón River, in Andean Peru, from the steep alpine canyons to the lower lying jungle. Remote, data-scarce river systems are under increased hydropower development pressure to meet rising energy demands. The upstream-downstream river co
By
Water Resources
July 7, 2017

Mountains receive a greater proportion of precipitation than other environments, and thus make a disproportionate contribution to the world’s water supply. The Luquillo Mountains receive the highest rainfall on the island of Puerto Rico and serve as a critical source of water to surrounding communities. The area’s role as a long-term research site has generated numerous hydrological, ecological, a
By
Climate Research and Development Program, Land Change Science Program
May 26, 2017

Formation of the Isthmus of Panama

The formation of the Isthmus of Panama stands as one of the greatest natural events of the Cenozoic, driving profound biotic transformations on land and in the oceans. Some recent studies suggest that the Isthmus formed many millions of years earlier than the widely recognized age of approximately 3 million years ago (Ma), a result that if true would revolutionize our understanding of environmenta
June 1, 2016

Comments to Middle Miocene closure of the Central American Seaway

In a recent paper proposing an early (mid-Miocene) closure of the Central American Seaway (CAS), Montes et al. 2015 (1) disregard existing paleogeographic data that invalidate Panama as a source for zircons, and inappropriately ignore the evidence for trans-isthmian marine connections until 4-3 Ma. They also fail to cite previous work (2, 3), that had reconstructed the Central American arc already
January 1, 2016

Implications of climate and land use change

This chapter relates ecosystem services to climate change and land use. The bulk of the chapter focuses on ecosystem services and steepland land use in the humid Neotropics – what is lost with land-cover changed, and what is gained with various types of restoration that are sustainable given private ownership. Many case studies are presented later in the white paper. The USGS contribution relates
January 1, 2016

Humans derive a great number of goods and services from terrestrial ecosystems (Millennium Ecosystem Assessment, 2003, 2005). Some, like timber, fruits, bush meat, and other forest based food stuffs, are evident but others are not so obvious. Increasingly policy makers have realized the importance of forests and other ecosystems in sequestering carbon, as clearing of once vibrant vegetation or dra
October 1, 2015

This chapter serves to introduce the geophysics of Neotropical steeplands. Topics are covered in a general manner with hyperlinks to active research and monitoring sites (such as the National Hurricane Center and US Geological Survey publication). Topics covered include ‘tropical climate and weather,’ ‘climate variations and trends,’ Neotropical ‘geology, and soils,’ ‘hillslopes and erosion,’ ‘lak
August 10, 2017

These geospatial data sets were developed as part of a new analysis of all known current and historical rain gages in the Luquillo Mountains, Puerto Rico published in the journal article Murphy, S.F., Stallard, R.F., Scholl, M.A., Gonzalez, G., and Torres-Sanchez, A.J., 2017, Reassessing rainfall in the Luquillo Mountains, Puerto Rico: Local and global ecohydrological implications: PLOS One 12(7):
By
Water Resources