Antibiotic-resistant bacteria pose challenges to healthcare delivery systems globally; however, limited information is available regarding the prevalence and spread of such bacteria in the environment. The aim of this project is to compare the prevalence and genetic relatedness of antibiotic resistant bacteria in large-bodied gulls (Larus spp.) at locations across Alaska to gain inference into associations between antibiotic resistance in wildlife and anthropogenically influenced habitats.  Study locations include: Adak, Bethel, Cold Bay, the Kenai River, the Kasilof River, Middleton Island, Nome, Soldotna, and Utqiagvik. 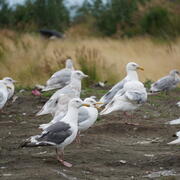 U.S. Geological Survey (USGS) scientists have developed a model that demonstrates how migratory wild birds in urban areas can acquire bacteria that are resistant to antibiotics, including those used in clinics, and potentially disperse these bacteria between continents via migration.
By
Ecosystems, Environmental Health Program, Species Management Research Program, Alaska Science Center
link
August 18, 2022

U.S. Geological Survey (USGS) scientists have developed a model that demonstrates how migratory wild birds in urban areas can acquire bacteria that are resistant to antibiotics, including those used in clinics, and potentially disperse these bacteria between continents via migration.
Learn More

ObjectivesWildlife may harbor clinically important antimicrobial resistant (AMR) bacteria, but the role of wildlife in the epidemiology of AMR bacterial infections in humans is largely unknown. In this study, we aimed to assess dissemination of theblaKPC carbapenemase gene among humans and gulls in Alaska.MethodsWe performed whole genome sequencing to determine the genetic context ofblaKPC in bact
By
Ecosystems, Alaska Science Center
December 18, 2020

Anthropogenic inputs into the environment may serve as sources of antimicrobial resistant bacteria and alter the ecology and population dynamics of synanthropic wild animals by providing supplemental forage. In this study, we used a combination of phenotypic and genomic approaches to characterize antimicrobial resistant indicator bacteria, animal telemetry to describe host movement patterns, and a
By
Ecosystems, Alaska Science Center
March 10, 2020

Gulls as sources of environmental contamination by colistin-resistant bacteria

In 2015, the mcr-1 gene was discovered in Escherichia coli in domestic swine in China that conferred resistance to colistin, an antibiotic of last resort used in treating multi-drug resistant bacterial infections in humans. Since then, mcr-1 was found in other human and animal populations, including wild gulls. Because gulls could disseminate the mcr-1 gene, we conducted an experiment to assess wh
By
Ecosystems, Alaska Science Center
November 25, 2019

The proliferation of antibiotic resistant bacteria in the environment has potential negative economic and health consequences. Thus, previous investigations have targeted wild animals to understand the occurrence of antibiotic resistance in diverse environmental sources. In this critical review and synthesis, we summarize important concepts learned through the sampling of wildlife for antibiotic
By
Ecosystems, Alaska Science Center
June 19, 2019

We tested extended‐spectrum β‐lactamase producing bacteria from wild gulls (Larusspp.) sampled in 2009 for the presence of mcr‐1. We report the detection of mcr‐1 and describe genome characteristics of four Escherichia coli and one Klebsiella pneumoniaeisolate from Spain and Portugal that also exhibited colistin resistance. Results represent the earliest evidence for colistin‐resistant bacteria in
By
Ecosystems, Alaska Science Center
June 17, 2019

We report the first detection of carbapenemase-producing Escherichia coli in Alaska and in wildlife in the United States. Wild bird (gull) feces sampled at three locations in Southcentral Alaska yielded isolates that harbored plasmid-encoded blaKPC-2 or chromosomally-encoded blaOXA-48, and genes associated with antimicrobial resistance to up to eight antibiotic classes.
By
Ecosystems, Alaska Science Center
April 13, 2019

Gulls (Larus spp.) have frequently been reported to carry Escherichia coli exhibiting antimicrobial resistance (AMR E. coli); however, the pathways governing the acquisition and dispersal of such bacteria are not well-described. We equipped 17 landfill-foraging gulls with satellite transmitters and collected gull fecal samples longitudinally from four locations on the Kenai Peninsula, Alaska to as
By
Ecosystems, Alaska Science Center
May 8, 2018

Acquisition and dissemination of cephalosporin-resistant E. coli in migratory birds sampled at an Alaska landfill as inferred through genomic analysis

We explored the abundance of antibiotic-resistant Escherichia coli among migratory birds at remote sites in Alaska and used a comparative approach to speculate on plausible explanations for differences in detection among species. At a remote island site, we detected antibiotic-resistant E. coli phenotypes in samples collected from glaucous-winged gulls (Larus glaucescens), a species often associat
By
Ecosystems, Contaminant Biology, Alaska Science Center
December 1, 2016

BackgroundAntibiotic-resistant bacteria pose challenges to healthcare delivery systems globally; however, limited information is available regarding the prevalence and spread of such bacteria in the environment. The aim of this study was to compare the prevalence of antibiotic-resistant bacteria in large-bodied gulls (Larus spp.) at urban and remote locations in Southcentral Alaska to gain inferen
By
Ecosystems, Alaska Science Center