The movement and transmission of avian influenza viruses in wild birds may differ by the migratory nature of each host species.

The movement and transmission of avian influenza viruses in wild birds may differ by the migratory nature of each host species. USGS research examined migration patterns of mallards and northern pintails and found that mallards appear less likely to make migratory flights between Alaska and Asia.  Thus, mallards are less likely to transfer Asian origin viruses directly to North America via Alaska.  However, mallards may be acommon species to transmit avian influenza viruses once infected.

Many blue-winged teal winter in the Neotropics and breed in southern Canada.  Thus, the migratory routes of this species are a potential pathway for infectious agents to move between the Neotropics and North America.  For example, H7 subtype influenza viruses, which have important implications for domestic animal and human health, are seasonally abundant in blue-winged teal in spring. Although preliminary data suggest that these viruses do not contain South American types of viruses, it remains unclear if teal are transporting H7 viruses from Neotropic wintering areas (e.g. Columbia, Guatemala, and Mexico) into the United States and which locations may be at highest risk for the introduction of viruses. Using a combination of satellite telemetry and genomic sequencing of influenza viruses, this project investigates the intercontinental movement of hosts and viruses between the United States and the Neotropics. Results will provide information to optimize surveillance efforts for the introduction of avian pathogens into the southern United States and generate information that may be used to improve biosecurity of poultry production facilities in this region.

Early on, the USGS identified the Northern Pintail as a model species to test the hypothesis that wild birds play a role in the dispersal of avian influenza viruses between continents.  Northern Pintails are one of the most common waterfowl species, breeding throughout high latitudes of Russian and Alaska and wintering throughout Asia and the lower-48 U.S. USGS research in the U.S. and Japan determined Northern Pintails are highly migratory, with satellite telemetry and band recovery data finding movement of pintails between East Asia and North America. Population genetic and banding data demonstrated that East Asia and Pacific U.S. populations are essentially one group that partially overlaps in northeastern Russia during the summer. In 2008, the USGS conducted genetic sequencing of avian influenza viruses isolated from pintails in Alaska and revealed a high frequency of Eurasian genes, suggesting viral gene flow between Asian and North America (See Koehler et al. 2008). Ongoing USGS Alaska Science Center research continues to provide support for maintaining Northern Pintails as a species of interest in surveillance efforts for foreign-origin pathogens into North America.

Because Tundra Swans are potentially susceptible to highly pathogenic avian influenza virus, we sought to better understand the migration of Tundra Swans throughout North America. This project documents population differences in migration patterns and wintering distribution of Tundra Swans that breed across Alaska. A total of 50 Tundra Swans were fitted with satellite transmitters (PTT) at five different breeding areas in Alaska, including the southern and northern Alaska Peninsula, the Yukon-Kuskokwim Delta, drainages of Kotzebue Sound, and the Arctic Coastal Plain. An understanding of population-specific movement patterns of this widespread species will facilitate management of wildlife and domestic poultry populations and improve our understanding of the role of migratory birds in the redistribution of pathogens and contaminants.

Gulls are a common reservoir species for avian influenza viruses and have been a high priority species to sample for pathogens because populations in western Alaska are thought to migrate to Asia for winter and thus have connections with outbreak areas of highly pathogenic avian influenza.  However, little is known about the migratory routes of gulls from northern and western Alaska.  Additionally, gulls are scavengers of dead animals and at landfills and may thus be a disease dispersal species, moving pathogens between wildlife and human environments.  The USGS Alaska Science Center is examining the prevalence and diversity of avian influenza in gulls each year through surveillance sampling.  Research is also examining how other marine birds may play a role in the maintenance and dispersal of avian influenza viruses. 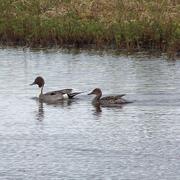 Since 2006, the USGS Alaska Science Center has been part of the State and Federal interagency team for the detection and response to highly pathogenic (HPAI) viruses in North America. Avian influenza or "bird flu" is a viral disease that primarily infects domestic poultry and wild birds. Avian influenza viruses are naturally occurring in wild birds such as ducks, geese, swans, and gulls. These...
By
Ecosystems, Biological Threats and Invasive Species Research Program, Species Management Research Program, Alaska Science Center
link
July 13, 2017

Since 2006, the USGS Alaska Science Center has been part of the State and Federal interagency team for the detection and response to highly pathogenic (HPAI) viruses in North America. Avian influenza or "bird flu" is a viral disease that primarily infects domestic poultry and wild birds. Avian influenza viruses are naturally occurring in wild birds such as ducks, geese, swans, and gulls. These...
Learn More
link

In early 2006, an Alaska Interagency Avian Influenza Working Group was formed to develop a ranking matrix for selecting priority species to be sampled within Alaska. Most wild bird species with populations that utilize areas of both Alaska and Asia were identified and considered in the ranking exercise. Based on scoring criteria, 28 target species were chosen for sampling. Alaska is a...
By
Biological Threats and Invasive Species Research Program, Alaska Science Center
link
May 18, 2018

In early 2006, an Alaska Interagency Avian Influenza Working Group was formed to develop a ranking matrix for selecting priority species to be sampled within Alaska. Most wild bird species with populations that utilize areas of both Alaska and Asia were identified and considered in the ranking exercise. Based on scoring criteria, 28 target species were chosen for sampling. Alaska is a...
Learn More

Introductions of low-pathogenic avian influenza (LPAI) viruses of subtypes H5 and H7 into poultry from wild birds have the potential to mutate to highly pathogenic avian influenza (HPAI) viruses, but such viruses' origins are often unclear. In January 2016, a novel H7N8 HPAI virus caused an outbreak in turkeys in Indiana, USA. To determine the virus's origin, we sequenced the genomes of 441 wild-b
By
Ecosystems, Alaska Science Center
January 1, 2016

Although a diverse population of influenza A viruses (IAVs) is maintained among ducks, geese, shorebirds, and gulls, not all of the 16 avian hemagglutinin (HA) subtypes are equally represented (1). The 14th HA subtype, commonly known as the H14 subtype, was historically limited to isolates from the former Soviet Union in the 1980s (2) and was not subsequently detected until 2010, when isolated in
By
Ecosystems, Alaska Science Center
May 1, 2015

Relative to research focused on intercontinental viral exchange between Eurasia and North America, less attention has been directed towards understanding the redistribution of influenza A viruses (IAVs) by wild birds between North America and South America. In this study, we genomically characterized 45 viruses isolated from blue-winged teal (Anas discors) along the Texas and Louisiana Gulf Coast
By
Ecosystems, Contaminant Biology, Fish & Wildlife Disease, Wildlife Program (unpublished), Environmental Health Program, Alaska Science Center
May 13, 2014

Prevalence of avian influenza virus (AIV) antibodies in the western Atlantic subspecies of Red Knot (Calidris canutus rufa) is among the highest for any shorebird. To assess whether the frequency of detection of AIV antibodies is high for the species in general or restricted only to C. c. rufa, we sampled the northeastern Pacific Coast subspecies of Red Knot (Calidris canutus roselaari) breeding i
By
Ecosystems, Alaska Science Center, National Wildlife Health Center
May 1, 2014

Recent repeated isolation of H14 hemagglutinin subtype influenza A viruses (IAVs) in the New World waterfowl provides evidence to suggest that host and/or geographic ranges for viruses of this subtype may be expanding. In this study, we used genomic analyses to gain inference on the origin and evolution of H14 viruses in New World waterfowl and conducted an experimental challenge study in mallards
By
Ecosystems, Contaminant Biology, Environmental Health Program, Alaska Science Center
April 7, 2014

Tundra swans (Cygnus columbianus) like many waterfowl species are susceptible to lead (Pb) poisoning, and Pb-induced mortality has been reported from many areas of their wintering range. Little is known however about Pb levels throughout the annual cycle of tundra swans, especially during summer when birds are on remote northern breeding areas where they are less likely to be exposed to anthropoge
By
Ecosystems, Contaminant Biology, Environmental Health Program, Wildlife Program (unpublished), Alaska Science Center, National Wildlife Health Center, Bird Banding Laboratory
August 1, 2013

Blood samples from 105 northern pintails (Anas acuta) captured on Hokkaido, Japan were tested for antibodies to avian influenza virus (AIV), Japanese encephalitis virus (JEV), and West Nile virus (WNV) to assess possible involvement of this species in the spread of economically important and potentially zoonotic pathogens. Antibodies to AIV were detected in 64 of 105 samples (61%). Of the 64 posit
By
Ecosystems, Alaska Science Center
March 18, 2013

In North America, spring migration routes and breeding distribution of northern pintails Anas acuta vary because some individuals opportunistically nest at mid-latitudes in years when ephemeral prairie wetlands are available, whereas others regularly nest in arctic and sub-arctic regions where wetland abundance is more constant. Less was known about migration routes and breeding distribution of pi
By
Ecosystems, Wildlife Program (unpublished), Alaska Science Center
November 30, 2011

Satellite‐tracking of Northern Pintail Anas acuta during outbreaks of the H5N1 virus in Japan: Implications for virus spread

We fitted Northern Pintail Anas acuta in Japan with satellite transmitters and monitored their spring migration movements relative to locations where the highly pathogenic H5N1 avian influenza virus was detected in Whooper Swans Cygnus cygnus in 2008. Pintails were assumed not to be infected with the H5N1 virus at the time they were marked because capture occurred between 2 and 5 months before rep
By
Ecosystems, Fish & Wildlife Disease, Wildlife Program (unpublished), Alaska Science Center