Ray Batson was born in Lincoln, Nebraska, on 8 July 1931. His lifelong passion for flying surfaced early. In high school he worked at Stapleton Airfield in Denver refueling planes in order to pay for flying lessons, and obtained his private pilot’s license. After a year of study at Regis College, he enlisted in the United States Air Force and served a two-year tour of duty as an airplane mechanic in Anchorage, Alaska. He returned to Colorado in 1953 and enrolled at CU in Boulder. 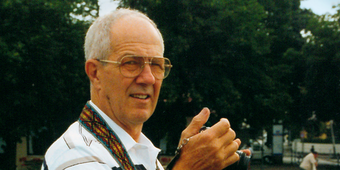 While in summer school in 1954, Ray met the love of his life, Rhoda Meier. They were married in August 1955. Over the next few busy years, the two began a family, with a daughter, Beverly born in 1956 and sons “Fritz” and Tom born in 1957 and 1960. During this period he took up rock climbing as a hobby, and served as president of the Rocky Mountain Rescue Group, which primarily rescued injured and stranded climbers, but also volunteered as a member of rescue/cleanup crews for remote air crashes. The most significant of these was the 1956 collision between a TWA Constellation and a United DC-7 over the Grand Canyon, which resulted in an unprecedented 128 fatalities and led to major changes in the US air traffic control system. Ray was deeply moved by his experience on the crash site and later wrote a memoir about it.

Ray began working as a photogrammetrist and field surveyor for the Topographic Division of the USGS in 1957. While working full-time at the Denver Federal Center he commuted to Boulder. Shortly after receiving his BS in Geology in 1962, Ray (who had been following the emerging space program with great interest) answered a job advertisement for the nascent Branch of Astrogeologic Studies of the USGS in Menlo Park, California. He was quickly hired as a photogrammetrist and tasked by Branch founder Eugene Shoemaker with developing novel techniques to analyze images from the upcoming Surveyor series of robotic lunar landers and its hard (i.e., crash) landing precursor, Ranger. Along with most of the Astrogeology staff, the Batsons moved to Flagstaff, Arizona in September 1963. Although the group had newly built quarters at the Museum of Northern Arizona, its facilities fell somewhat short of “space age” at first; facing a shortage of even simple mechanical calculators, Ray had to perform extensive photogrammetric calculations with pencil, paper, and a set of logarithm tables. Despite these challenges, he helped carry out and analyze a simulated Surveyor mission at Bonita lava flow northeast of Flagstaff, and by the time the actual Surveyors reached the Moon and returned 89,000 images—a volume of data that would not be surpassed by a NASA planetary mission until the early 1990s—the team was well prepared. They hand-assembled mosaics of the narrow-angle television frames onto the interior of plastic hemispheres to represent the full view of each Surveyor landing site and made quantitative measurements of rocks, craters, and other features. If Batson and his team were disappointed when the Soviet Luna 9 probe beat Surveyor 1 to the first successful soft landing by four months in early 1966, they quickly had the last laugh. Transmissions from Luna 9 were intercepted by the radio telescope at Jodrell Bank, England, and the Astrogeology group analyzed them to publish a map of the Luna landing site before the Soviets officially released the images. 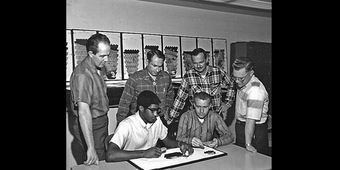 The Ranger and Surveyor projects were of course intended as preparations for landing humans on the Moon under Project Apollo. As with the robotic missions, the USGS Flagstaff team supported Apollo from beginning to end. In this era, trips to NASA and contractor facilities became so frequent that Ray obtained his commercial pilot’s license and served as one of several incidental pilots who regularly ferried other team members (and themselves) to meetings. Before Apollo 11, Ray and colleagues developed procedures for the use of a special stereo camera that unfortunately never flew to the Moon, and for the standard Hasselblad cameras that were used extensively by the astronauts. During each of the Apollo landings (as well as the terrestrial field simulations that preceded them), they worked in the “back room” alongside astrogeologists and other experts, quickly assembling mosaics and maps based on television images to support mission operations in real time. After each mission, they analyzed the returned Hasselblad images much more painstakingly to produce the definitive maps of the landing site. Key to this process were the airbrush artists Pat Bridges and Jay Inge, hired by Batson in 1970. Both had previously worked for the Air Force Aeronautical Chart and Information Center (ACIC), producing relief maps of the Moon from telescopic and orbital data. At the USGS they used their skills to distill the information in dozens of separate handheld images into a single coherent map view, tied to precise coordinates derived by the photogrammetrists. These maps provided the context showing where the astronauts went on the Moon, what they did, and the source of the samples they collected, thus serving as the essential “glue” binding the scientific interpretation of the Apollo results into a coherent picture.

Budgets and staff at both NASA and Astrogeology contracted dramatically after the end of the Apollo program, but fortunately the cartographic techniques that Batson and his group had pioneered for the Moon missions were recognized as invaluable for the subsequent robotic exploration of the planets. In 1972 NASA transferred responsibility for planetary mapmaking from the ACIC to the USGS and the group began making photogrammetrically controlled image mosaics and airbrush maps of Mars with data from Mariner 9 and of Mercury with Mariner 10 images. Over the years, the group analyzed data from numerous other missions, including the Viking Orbiters, which greatly extended Mariner 9’s exploration of Mars, the Voyager 1 and 2 missions to the outer solar system, the Galileo Jupiter orbiter, and Magellan, which provided nearly global radar images of Venus. Prior to Magellan, they worked with Soviet scientists to produce maps of Venus’s northern hemisphere from the lower resolution radar imagers carried on Venera 16 and 17. Mapping the majority of the solar system for the first time created the need to assign names to thousands of prominent features, a process that Batson participated in as a member of the International Astronomical Union’s Working Group on Planetary System Nomenclature. The working group’s database of planetary names is still maintained at the Astrogeology Science Center.

Much of this work was done under the auspices of the various missions, but completing the synthesis of mission data into usable maps usually fell to NASA’s Planetary Cartography Program, in which Batson was a Principal Investigator for nearly 20 years. He was a member of the NASA Planetary Cartography Working Group, tasked with making recommendations for the priority and schedule for mapping various Solar System bodies for nearly as long. Technical innovation did not stagnate over this period. Although airbrush maps tied to photogrammetrically controlled mosaics remained important, the processes by which they were produced were increasingly digital. The Mars Digital Image Mosaic (MDIM), containing more than 5000 Viking Orbiter images was controlled and assembled entirely by digital processing and released in 1991 on a set of six CD-ROM disks, an astonishing volume of data for the era. Processing for the Magellan Venus mission included the digital assembly of even larger global mosaics (a trend that would continue into the next century), digital production of airbrush maps using commercial image-retouching software, and even the automated production of airbrush-like shaded relief maps from topographic data. These efforts were recognized by a NASA Award citing Batson’s “leadership and sustained contribution to planetary mapping.” Other major recognitions include a USGS Meritorious Service Award in 1986 and election as Fellow of the American Society of Photogrammetry and Remote Sensing in 1994. Ray also earned not only the respect but the enduring friendship of his scientific colleagues and the cartographers who worked for him. His expertise was matched with a warm, outgoing personality and a sense of humor that made him a pleasure to work with and an outstanding traveling companion.

By the time that Inge and Batson compiled a volume of Indices of Maps of the Planets and Satellites in 1992, the USGS contribution included more than 800 maps of seven planets (not including the Earth) and 23 natural satellites. More than 550 maps had been produced for Mars alone. This monumental body of work was encapsulated in “wall chart” form by a special USGS map I-2447 Mapping the Solar System published in 1994, which received a Presidential Design Award the following year. Those wishing for more detail than could be shown in a single chart would find it in the NASA Atlas of the Solar System, edited by Batson and Arizona State University planetary geologist Ronald Greeley in 1997. This atlas won the Mary B. Ansari award for best reference volume in the geosciences, and was updated as the Compact NASA Atlas of the Solar System in 2002. Greeley and Batson also edited the book Planetary Mapping (1990), which surveyed the history of the field and described both traditional methods and the digital processing that would come to dominate the field in subsequent years. 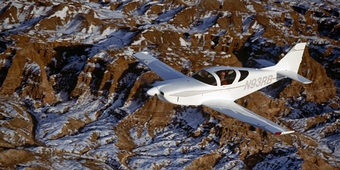 Ray Batson officially retired from the USGS in 1992, although he remained active as a scientist emeritus for the next few years. To no one’s surprise, he devoted much of his time in retirement to flying. The Steen Skybolt (an open-cockpit biplane) that he had built in his living room years earlier was supplanted by a high performance Glasair III known affectionately as the Sudden Snowflake. This new ride not only performed aerobatically (Ray earned the International Aerobatic Club’s Sportsman Award with Stars) but allowed Ray and Rhoda to tour the US at high speed and considerable comfort. Over the next 20 years they traveled extensively together, both in the Snowflake and to more distant destinations including Europe, South America, Africa, the North Pole, and Antarctica. On a trip to Alaska they studied bush flying and Ray earned his floatplane and floatplane instrument licenses. He also devoted increasing attention to photography, and wrote, illustrated, and sold a number of articles based on his travels with Rhoda. Between his career at the USGS and his retirement, Ray Batson explored the solar system and his home planet with a thoroughness that is unlikely ever to be surpassed.

Raymond M. Batson died of pancreatic cancer in Sedona, Arizona on 5 May 2013, aged 81. He was a seminal figure in the initial exploration of the Solar System. In his 30-year career in the Astrogeology program of the U.S. Geological Survey, he pioneered the development of techniques for planetary cartography and led the initial mapping of 7 planets and 23 satellites. He is survived by his wife of 57 years, Rhoda Meier Batson, and three children. 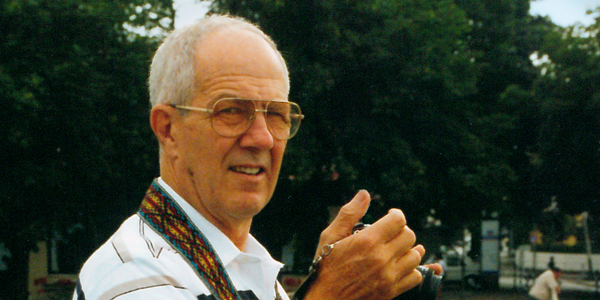 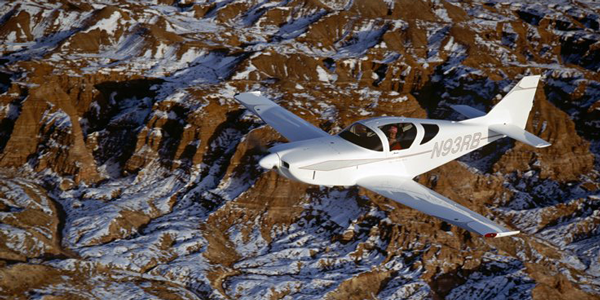 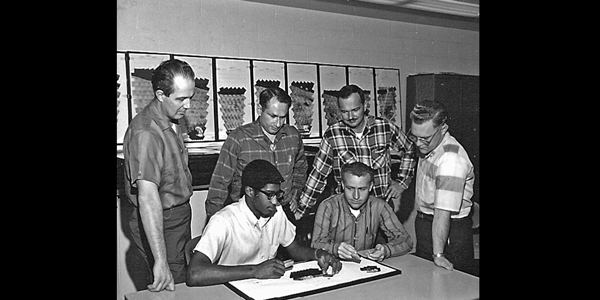