Issue: The Chesapeake Bay Program partners are striving to improve habitat conditions for recreational fisheries and other native fishes in the Bay and its watershed. While national fish habitat assessments have been conducted, resource managers need more local information to focus restoration and protection efforts in Chesapeake Bay watershed.

Conducting the fish-habitat assessments are challenging due to the size of the Bay and its watershed, which precludes direct surveys of all waters in an efficient and cost-effective manner. Predictive models can fill this gap by providing estimates of condition for these unsurveyed locations. Therefore, the USGS and NOAA are collaborating to improve fish-habitat assessments for inland waters and the estuary, using available data and innovative analytical methods with plans for a joint assessment in a pilot area.

The USGS examined and tested methods needed for a fish-habitat assessment in the nontidal portion of the Chesapeake Bay watershed. The investigators evaluated a large amount of data as part of the study including (1) fish community and species data, and (2) landscape variables that affect fish habitat conditions in nontidal streams and rivers. The investigators determined there was an insufficient number of comparable reference sites to develop a traditional measure of biological conditions, so they developed a novel method that combined community and species-level indicators.

The steps taken to achieve this assessment (Figure 1) included:

Findings are provided for both fish community and species-specific results.

Results are presented in figure 4 for brook trout (BRT), Northern hog sucker (NHS), Smallmouth bass (SMB), and Torrent Sucker (TRS). The areas where species are predicted to be present (light blue shades) represent places with landscape conditions that could support the species, while areas predicted to be absent (dark blue shades) represent places that may not support the populations of the species.

Successful management of freshwater systems hinges on the ability to effectively identify where to best invest resources toward conservation and restoration. Here the authors developed a flexible approach for non-tidal streams and rivers that considers both a novel composite measure of community biological condition and a species level occurrence analysis with similar data. This approach provides results that can give multiple views of condition and address multiple management needs. When examined at a finer scale (e.g., Fig. 5) results can be used to identify potential problem areas that require attention or areas that are experiencing biological improvement (i.e., lift) possibly via management actions.

Results also allow managers to compare and identify areas where both community and population level measures align (or differ) in predicting reach condition, which could aid in management efforts. For example, a site with a predicted Brook Trout presence but predicted marginal community index habitat score may indicate an area to target restoration to protect this key species, as the community assessment suggests potential habitat degradation which was missed by the species level assessment.

The results of the study have been published in Ecological Indicators (with open access), titled: “Using fish community and population indicators to assess the biological condition of streams and rivers of the Chesapeake Bay watershed, USA.” (https://doi.org/10.1016/j.ecolind.2021.108488)

Fish community and species distribution predictions for streams and rivers of the Chesapeake Bay Watershed. https://doi.org/10.5066/P9B4BMAG 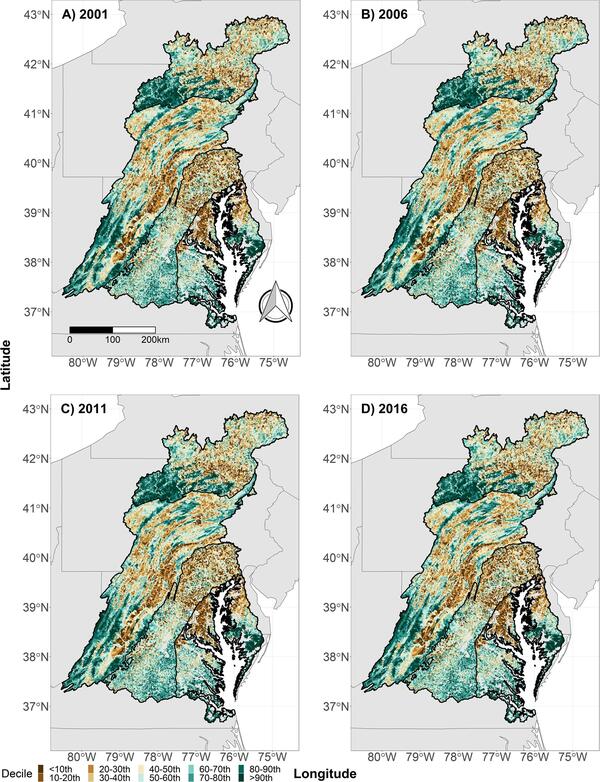 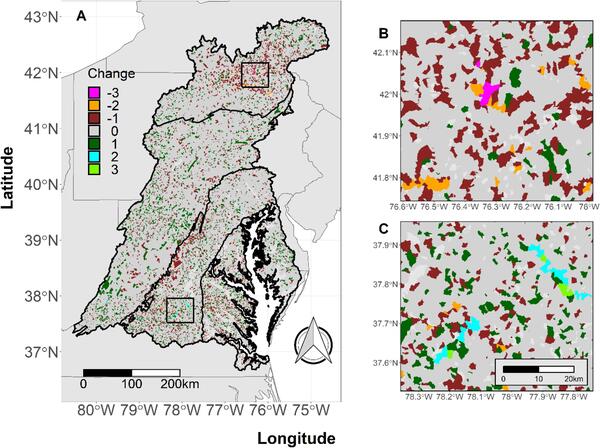 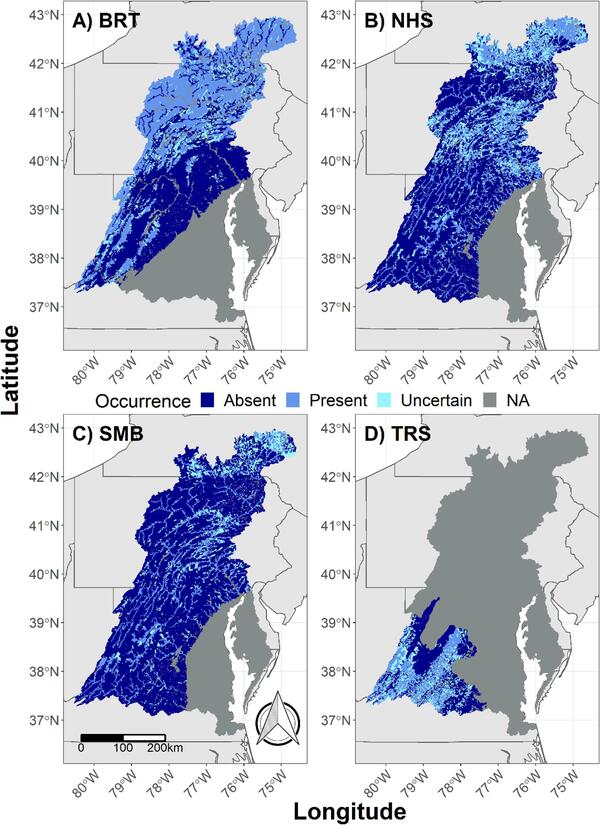 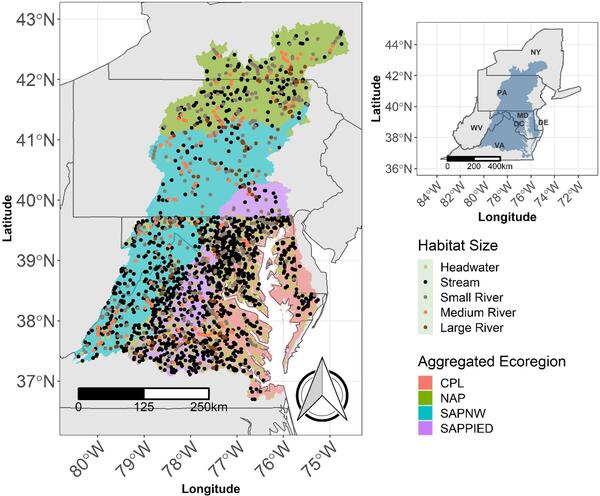 Using fish community and population indicators to assess the biological condition of streams and rivers of the Chesapeake Bay watershed, USA

The development of indicators to assess relative freshwater condition is critical for management and conservation. Predictive modeling can enhance the utility of indicators by providing estimates of condition for unsurveyed locations. Such approaches grant understanding of where “good” and “poor” conditions occur and provide insight into landscape contexts supporting such conditions. However, as a
By
Ecosystems, Water Resources, Science Analytics and Synthesis (SAS), Chesapeake Bay Activities, Maryland-Delaware-D.C. Water Science Center, Wetland and Aquatic Research Center