Dr. Helen Poulos spent countless childhood hours wandering the forests of coastal California. On family camping trips through the woodlands, her curiosity piqued: How did these forests emerge? When they change, seasonally or otherwise, why do those changes occur the way they do?

Years later, as a graduate student in forest ecology, Poulos aimed a spectrometer she had picked up for one of her remote sensing classes at the leaves of plants she’d grown from acorns, noting the measurements of visible and invisible light reflected across the electromagnetic spectrum.

Today, Poulos recalls that experience as one that revealed the value that remote sensing from space offered in her lifelong quest to understand the ecosystems that had colored her childhood memories with curiosity.

“To think that you could look at that on an individual plant and then also observe it from space was one of those moments, like an ‘aha moment,’” Poulos said on a recent episode of the USGS Earth Resources Observation and Science (EROS) Center podcast Eyes on Earth.

As an educator, Poulos now endeavors to help her students at Wesleyan University in Connecticut find their own “aha” moments in her remote sensing classes. As a researcher, she has focused recently on the forests of the Chiricahua Mountains of Arizona, where she’s leaned on a range of satellite data sources to tease out the details of post-fire ecosystem recovery. She’s used data from USGS-NASA Landsat satellites and data products derived from sensors aboard NASA’s Terra and Aqua satellites in the past, but her latest work has been informed by the ECOsystem Spaceborne Thermal Radiometer Experiment on Space Station (ECOSTRESS) sensor.

ECOSTRESS data are archived and made available to the public through the NASA Land Processes Distributed Active Archive Center (LP DAAC), which is hosted by the USGS and located at EROS.

ECOSTRESS is one of two sensors on the International Space Station (ISS) whose data are available through the LP DAAC. The other ISS data source is the Global Ecosystem Dynamics Investigation (GEDI), which offers three-dimensional views of the Earth’s surface.

Another, a hyperspectral sensor built for the NASA Earth Mineral Dust Source Investigation (EMIT) is in the works to take up residency on the ISS around 2027.

Tom Maiersperger, the LP DAAC project scientist with the USGS, has been impressed by how useful the information gathered during these short-term missions have turned out to be. Like GEDI, ECOSTRESS was set for a two-year lifespan, but both sensors continue to collect data and fuel scientific inquiry.

“These demonstration missions give the community demonstrable evidence that yes, we can use these kinds of sensor technologies to get after questions about ecosystem process, land surface process or the water cycle,” Maiersperger said. “It really builds that body of evidence and gives the science community the material they need to justify bigger science missions.”

For her part, Poulos pulled ECOSTRESS data from the LP DAAC for a study titled “Wildfire severity and vegetation recovery drive post-fire evapotranspiration in a southwestern pine-oak forest, Arizona, USA,” which was published as part of a NASA-funded project. In the publication, she and collaborators from Northern Arizona University and University of Maine at Farmington aim to better understand how fires remake arid landscapes and the impact those recovering landscapes might have on water availability and water use.
What they found was surprising. After years of fire suppression that reduced the frequency of large fires in the Chiricahuas, the year 2011 saw historically dry conditions fueling massive fire complexes. The Horseshoe Two Fire tore through more than 90,000 hectares (222,400 acres), including around 70% of the mountain range alone.

Contrary to other research on post-fire evapotranspiration, Poulos’ team found surprisingly high rates of water use among plants. Typically, the loss of vegetation means less plant life to consume water. The oak shrublands that emerged to replace the tall pine/oak stands that burned in Horseshoe Two, however, were thirstier—a finding that has implications for other large fire events at high elevations, as well as for the communities in and around those areas.

“We're talking about high-elevation mountain environments with lots of forests, but those mountains are really providing water to downstream and lower-elevation users in other communities,” she said. “And also that means that there's less water in the soil to promote the regeneration and survival and success of other species that are there. What's happening is the water is going from the soil into the atmosphere, and not into the soil and then running downstream.”

ECOSTRESS was the data source that made those discoveries possible. The metric for “thirsty” in an area’s plant life is evapotranspiration (ET), or the combined measurement of water evaporated from the soil and transpired from plants. It’s a measurement of water vapor—part evaporation, part “plant sweat”—a massive but invisible line item in an ecosystem’s water budget that can only be estimated across large areas by spaceborne thermal sensors.

Satellites like Landsat are used to estimate ET across wide areas, but thermal data from such polar orbiters have limitations. Landsat collects repeat observations at the same time of day with each pass, meaning its thermal measurements reflect ET for that time of day, around 10:30 a.m. local time. Satellites like Terra and Aqua collect more frequent measurements—data from their sensors appear each day—but the resolution of those measurements is 500 meters per pixel at best.

Those particular limitations don’t apply to ECOSTRESS. Being affixed to the International Space Station (ISS) puts ECOSTRESS in position to measure plant stress at multiple points during the day, allowing Poulos and her colleagues to study the ways in which differing vegetation types consume moisture.

ECOSTRESS pixels, meanwhile, have a 70-meter spatial resolution. That’s coarser than Landsat’s 30 meters, but it’s far more detailed than the 500-meter resolution that had been available at a daily time step prior to the ECOSTRESS launch in 2018.

That “ecologically relevant pixel size” and repeat daily coverage were key to understanding the proliferation of oaks after Horseshoe Two.

“One of the reasons they’re so successful is that they're able to keep their stomates open and continue to cycle water throughout the day into the afternoon,” Poulos said. “The pines, on the other hand, shut down. And so if we didn't have ECOSTRESS, we wouldn't be able to see that that timing is actually a really important drought tolerance mechanism for these oaks, and that it's responsible for their post-fire success.”

The next steps for the researchers involve the placement of field sensors to measure ET on the ground, which will help validate ECOSTRESS data on plant stress. Poulos also sees value in ECOSTRESS for monitoring active fires and fire resiliency plans.

Maiersperger was pleased to hear about the work being done with ECOSTRESS data. The sensor was designed to measure water use and drought stress, but thermal imagery has far-reaching value, and previous sensors have proven their worth in the research community. The Advanced Spaceborne Thermal Emission and Reflection Radiometer (ASTER) sensor on NASA’s Terra satellite brought high-resolution thermal information to scientists, for example.

“There’s always been a community that utilizes imagery in the thermal domain. ECOSTESS changes that a little bit because of its precessing orbit,” Maiersperger said. “It’s satisfying to hear about researchers who are able to utilize the unique temporal acquisition properties of ECOSTRESS to bring out some new results and realizations, and then take the next step and ask ‘how can I pivot from characterization to prediction or modeling?’”
With more publicly available data sources like ECOSTRESS coming online through LP DAAC, alongside a host of other satellite sources, Poulos said, it’s an exciting time to get involved in remote sensing research. With a little curiosity and a bit of education on how to use remote sensing data, there are “aha” moments around every corner.
“I would tell any young, ambitious person who wanted to learn remote sensing to go out, get an account at LP DAAC and start downloading some data, start working with it,” Poulos said. “Go do it. Take measurements, learn about what’s available.” 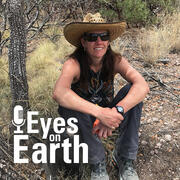 Eyes on Earth is a podcast on remote sensing, Earth observation, land change and science, brought to you by the USGS Earth Resources Observation and Science (EROS) Center. In this episode, we learn how a new spaceborne sensor aids the study of wildfire recovery.
Learn More

Fires can be destructive or healthy for a landscape—often both. Fires have grown larger and more destructive in recent years, though, thanks to human activity, climate change, and a host of other factors. Satellite data helps us to map and monitor fire activity, but the study of post-fire plant life using remote sensing data goes further than fire mapping.

A NASA science space mission measuring the temperature of plants to help study how they respond to water shortages is getting an important assist from...