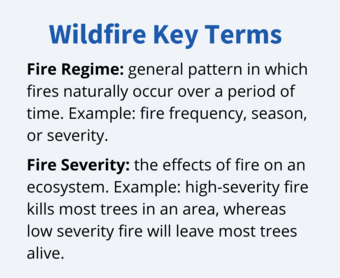 Wildfires are not a new phenomena; they have been influencing landscapes and the lives of plants, animals and people for centuries to millennia. Fire in wildlands can increase the resilience of fire-adapted ecosystems, improve wildlife habitat, and reduce future wildfire risk. However, increases in wildfire size, frequency, severity, and duration are changing the landscape of the United States, killing large tracts of forest, affecting air quality and water supplies, as well as threatening lives and property. These changes in fire are highly influenced by human land use and climate change.

Planning for and managing wildfire is a complex issue, requiring a multidisciplinary approach to inform present-day land management in the face of increasing wildland fire. Combining modern records of wildfire with records of past wildfires is useful to inform present and future management. Fire regimes, or the general pattern in which fires occur, and their relationships with climate, may be used by land managers to forecast future fire. Components of a fire regime include: fire severity, size, frequency, and season. These elements of a historical fire regime can inform fire management and restoration, including prescribed fire, but modern records are often too short to characterize fire regimes.

Research efforts at the New Mexico Landscapes Field Station, part of the Fort Collins Science Center, have strongly focused on fire and how it impacts the environment, both historically and in the present. As a field station located in northern New Mexico, researchers have conducted place-based science for decades and observed changes to the local forested landscapes following severe fires driven by climate change and historical land use. Studying a changing landscape over decades, in collaboration with local land managers, enables unparalleled understanding of the patterns, causes, and consequences of changing fire regimes. Wildfire researchers at the Field Station have also contributed to the USGS Wildland Fire Strategic Plan, a publication that establishes fire science priorities for USGS using input from multiple collaborators at the community, state, tribal and federal level.

Ecologists at the Field Station have contributed to recent publications that focus on documenting the history, patterns, causes, and consequences of wildfire over multiple centuries. Three publications, explained more in-depth below, provide a robust picture of historical fire regimes and provide key information useful to understanding, managing, and living with fire:

All three of these publications rely on examining tree-ring growth to establish a historical record of fire. Trees record the environment, and some trees even record fires. The annual growth rings of trees can be dated to the year of formation using a pattern matching technique called “crossdating” (Figure 1). If a tree is wounded by a fire, but not killed, the fire can be recorded in the tree rings. These wounds, called fire scars, are often healed over and can be preserved for many centuries (Figure 2). Some trees become incredible recorders of fire, recording up to 30 or more individual fires spanning many centuries.

By crossdating the tree-ring fire scars, scientists can determine the year and even season when a past fire burned. This enables the reconstruction of fire regime components like historical fire frequency, or the number of years that occurred between fires, over many centuries. It’s commonly observed that in the dry conifer forests containing ponderosa pine across the West that fires historically burned, but did not kill trees every 5 to 15 years, on average, until human land use (grazing, logging, and active fire suppression) stopped fires circa 1900. The lack of fire set off a chain of events where small trees and dead wood, that used to be cleaned up by the frequent fires, began to accumulate. Now, when this century’s worth of fuels burns, it burns uncharacteristically hot, killing large swaths of forests that the tree rings tell us survived dozens of fires over past centuries. This scientific knowledge, derived from tree rings, provides information on past fire regimes and consequences of fire exclusion and is key to informing forest and fire regime restoration, management, and policy.

In low elevation forests, tree ring data suggested low-severity surface fires regularly burned between 1390 and 1899, but have been excluded over the last century leading to increased risk of large high-severity fire. In high elevation forests, fire scars were rare, but even-aged quaking aspen stands indicate a large, intense, crown fire burned during the severe drought of 1842 and killed large swaths of forests near Taos Ski Valley and the surrounding community. In the hands of local land managers, information on historical fire regimes indicates that high-severity fire is a natural component of upper elevation forests and is increasingly likely with hotter drought. In lower elevation forests, the restoration of low-severity fire regimes and associated open forest structure is in agreement with the centuries-long local history of fire.

"Valleys of fire: historical fire regimes of forest-grassland ecotones across the montane landscape of the Valles Caldera National Preserve, New Mexico, USA": Fire is a fundamental process across a range of ecosystems of the American southwest. High-altitude grasslands, known as montane grasslands, are common in this part of the country, and present a challenge to land managers working to understand how wildfire has previously shaped these grasslands. Because grasslands typically lack trees that allow for tree-ring analyses of past fire events, scientists turn to ecotones – the transition area between two landscapes – for information. Over 200 trees located at the grassland-forest ecotone in the Valles Caldera National Preserve in New Mexico were analyzed to reconstruct the fire history of the grasslands. Using 2,361 tree-ring fire scars they were able to reconstruct 234 fire years, from the years 1248 to 2005. The relatively high frequency of fires in the past in the Preserve leads ecologists to believe the potential reintroduction of prescribed fire and managed wildfire, as well as thinning and manual fuel removal, may be useful to restore the important ecological process of fire.

"Native American fire management at an ancient wildland–urban interface in the Southwest United States": The wildland-urban interface (WUI) describes instances where human communities intermix with fire-prone wildland ecosystems. The WUI in the United States has expanded by 30% since 1970, posing increased risk with increasing wildfire. However, humans living within fire-prone ecosystems isn’t a new challenge. In the Jemez Mountains of northern New Mexico, large communities of Ancestral Puebloans lived for centuries in WUI-like conditions and offer tangible lessons in sustainable human–fire interaction. Working with the Pueblo of Jemez, Hopi, White Mountain Apache, and Zuni tribes, scientists constructed a thorough understanding of the relationship between indigenous human land use, land resources, and fire. Tree-ring and charcoal evaluation concluded that low-severity fires were historically frequent and influenced by indigenous fire and land use in the Jemez WUI for centuries. Two important management practices from the ancient Jemez WUI that are useful to consider for making the modern WUI more fire resistant, are 1) wood collecting and thinning, particularly in close proximity to settlements; and 2) burning frequently with many small, patchy fires that reduced fuels and limited the potential size of a wildfire. Reshaping western United States culture by learning from indigenous cultural values towards fire may be critical for building resilience in modern communities and adjacent ecosystems.

These three publications illustrate that for centuries, fire played an important role across a range of ecosystems in the American Southwest. Because fire has been suppressed for over a century by changing human land use, ecosystems and societies are paying the consequences as fire is returning and burning hotter than it has for centuries.

The information gathered while reconstructing historical fire regimes has proven to be useful to understand the anomaly of recent fires in a multi-century context. It also allows land managers  to quantify components of fire regimes, including fire frequency and season length, that inform fire management. Through place based science-management partnerships with multiple agencies and collaborators across northern New Mexico (including Taos Valley Watershed Coalition, Bandelier National Monument, and Santa Fe Fireshed Coalition), forest and fire regime restoration is occurring, guided by science, with the hopes that it will impart resilience in the forests under increasing pressure from climate change. To see an example of recent published fire science guiding restoration, view the "Taos Valley Fire History" video, which focuses on historic fire regimes informing restoration efforts in Taos Canyon, New Mexico. Wildfire science research from the New Mexico Field Station is part of a broad network of important, diverse fire science occurring across the USGS, recently described in the USGS Wildland Fire Science Strategic Plan.

Fire-climate research from the New Mexico Landscapes Field Station and others suggests continuation of increased area burned and increased fire severity in the southwest United States (Mueller et al. 2020) and broader Western U.S. The current US drought monitor indicates extreme drought across much of the Southwest, due in part to La Nina conditions in the equatorial Pacific Ocean that reduced winter precipitation, combined with warming temperatures that leave less available moisture for ecosystems. These climate conditions leave the region primed for another large fire season, pending ignitions and weather in the coming months, further emphasizing the urgency to restore low- and moderate-severity fire as an important ecosystem process.

The intersection of expanding human development and wildland landscapes—the “wildland–urban interface” or WUI—is one of the most vexing contexts for fire management because it involves complex interacting systems of people and nature. Here, we document the dynamism and stability of an ancient WUI that was apparently sustainable for more than 500 y. We combine ethnography, archaeology, paleoecology
By
Ecosystems, Climate Research and Development Program, Land Change Science Program, Alaska Science Center
January 21, 2021

ContextMontane grasslands and forest-grassland ecotones are unique and dynamic components of many landscapes, but the processes that regulate their dynamics are difficult to observe over ecologically relevant time spans.ObjectivesWe aimed to demonstrate the efficacy of using grassland-forest ecotone trees to reconstruct spatial and temporal properties of the historical fire regime in a complex lan
By
Ecosystems, Climate Research and Development Program, Land Change Science Program, Fort Collins Science Center
March 14, 2019