Bat Fatalities at Wind Turbines—Investigating the Causes and Consequences Active

Wind energy is one of the fastest-growing industries in the world and represents an important step toward reducing dependence on nonrenewable sources of power. However, widespread deployment of industrial wind turbines is having unprecedented adverse effects on certain species of bats that roost in trees and migrate. Bats are beneficial consumers of agricultural insect pests and migratory species of bats provide free pest-suppression services across ecosystems and international borders.

Although the underlying causes of bat fatalities at wind turbines remain unknown, potential clues can be found in the patterns of fatalities. TSH scientists, in collaboration with other U.S. Geological Survey (USGS) science centers as well as partners from Federal, State, and non-governmental organizations, are using these clues to focus research efforts. Investigations are underway to better identify the seasonal distributions, habitat needs, and migration patterns of species showing greatest susceptibility, assess the potential roles of mating and feeding behaviors in turbine collisions, develop new video-based methods for studying and monitoring bats flying around wind turbines at night, and test whether bats are attracted to turbines. Findings from these studies are leading us toward new ways of monitoring and possibly avoiding bat fatalities at wind turbines.

Bats are being found dead beneath wind turbines all over the world. Bat fatalities have now been documented at most wind facilities in the U.S. and Canada and it is estimated that tens to hundreds of thousands die at wind turbines in North America each year. This fairly new and unanticipated problem has moved to the forefront of conservation and management efforts directed toward this poorly understood group of mammals, particularly due to the concurrent effects of a new bat disease, white-nose syndrome. The mystery of why bats die at industrial wind turbines remains unsolved. Is it a simple case of flying in the wrong place at the wrong time? Are bats attracted to the spinning turbine blades? Why are so many bats colliding with turbines compared to their infrequent crashes with other tall, human-made structures? Are there ways to predict and minimize risk to bats before turbines are built?

Although these questions remain mostly unanswered, potential clues can be found in the patterns of fatalities. Foremost, the majority of bat fatalities at industrial turbines are species that migrate long distances and rely on trees as roosts throughout the year, some of which migrate long distances; we call these “tree bats.” Tree bats compose more than three quarters of the bat fatalities observed at wind energy sites. The other striking pattern is that the vast majority of bat fatalities at wind turbines occur during late summer and autumn. This seasonal peak in fatalities coincides with periods of both autumn migration, mating, and possibly increased feeding behavior by tree bats. Seasonal involvement of species with shared behaviors indicates that behavior plays a key role in the susceptibility of bats to wind turbines, and that migratory tree bats might actually be attracted to turbines.

Over the past decade USGS scientists and their research partners have been studying bat deaths at wind turbines, with the ultimate goal of understanding why they are happening so solutions can be developed to avoid or fix the problem. In addition to synthesizing existing information, USGS research has focused on better understanding aspects of tree bat ecology that might offer important clues to their susceptibility. This work has shed new light on the migratory movements, mating behaviors, and feeding habits of migratory tree bats, which may help explain their disproportionate representation among turbine fatalities. For example, recent analysis of distribution records hints at where these bats might occur at any given time of year.

Continuing on the same research trajectory, USGS scientists at the Fort Collins Science Center have built an active research program to investigate the causes and consequences of bat fatalities at wind turbines. In collaboration with scientists at four other USGS science centers, as well as universities and conservation organizations, our specific focus is to better identify the seasonal distributions, habitat needs, and migration patterns of species showing greatest susceptibility, continue to assess the potential roles of mating and feeding behaviors in turbine collisions, develop new video-based methods for studying and monitoring bats and birds flying around wind turbines at night, and find new and efficient ways of preventing bat deaths at wind turbines. USGS is now experimentally determining whether bat activity and fatality can be minimized or avoided by changing how bats perceive wind turbines from afar. With a proven track record of studying bat migration and behavior, combined with an existing infrastructure that promotes collaboration between disciplines, the USGS is well-equipped to effectively address the problem of bat mortality at wind power facilities. Only through further focused research will we efficiently make progress toward minimizing the impact of this new form of sustainable energy on our Nation’s wildlife. 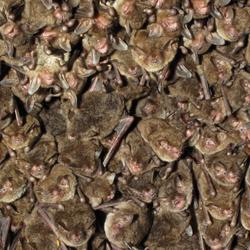 North American bats face unprecedented threats including habitat loss and fragmentation, white-nose syndrome, wind energy development, and climate change. However, it is difficult to evaluate the impacts of these threats due to a lack of basic information about the distribution and abundance of bats across the continent. Although bat monitoring has long been conducted in individual areas and for...
By
Biological Threats and Invasive Species Research Program, Species Management Research Program, Fort Collins Science Center, Northern Rocky Mountain Science Center
link
October 26, 2016

North American bats face unprecedented threats including habitat loss and fragmentation, white-nose syndrome, wind energy development, and climate change. However, it is difficult to evaluate the impacts of these threats due to a lack of basic information about the distribution and abundance of bats across the continent. Although bat monitoring has long been conducted in individual areas and for...
Learn More
link 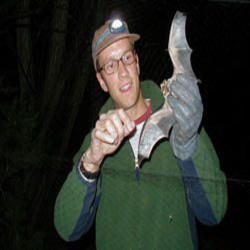 Bat Species of Concern: An Ecological Synthesis for Resource Managers

A large number of bat species are considered “species of concern” in the United States and its Territories, and resource managers are increasingly interested in learning more about their distribution, status, and potential management.
By
Ecosystems, Species Management Research Program, Fort Collins Science Center
link
July 5, 2016

Bat Species of Concern: An Ecological Synthesis for Resource Managers

A large number of bat species are considered “species of concern” in the United States and its Territories, and resource managers are increasingly interested in learning more about their distribution, status, and potential management.
Learn More

Understanding of migration in small bats has been constrained by limitations of techniques that were labor-intensive, provided coarse levels of resolution, or were limited to population-level inferences. Knowledge of movements and behaviors of individual bats have been unknowable because of limitations in size of tracking devices and methods to attach them for long periods. We used sutures to atta
By
Ecosystems, Species Management Research Program, Fort Collins Science Center
July 27, 2016

Despite conservation concerns for many species of bats, factors causing mortality in bats have not been reviewed since 1970. Here, we review and qualitatively describe trends in the occurrence and apparent causes of multiple mortality events (MMEs) in bats around the world. We compiled a database of MMEs, defined as cases in which ≥ 10 dead bats were counted or estimated at a specific location wi
By
Ecosystems, Species Management Research Program, Fort Collins Science Center
November 10, 2015

Widespread bat fatalities at industrial wind turbines are a conservation issue with the potential to inhibit efficient use of an abundant source of energy. Bat fatalities can be reduced by altering turbine operations, but such curtailment decreases turbine efficiency. If additional ways of reducing bat fatalities at wind turbines were available such tradeoffs might not be needed. Based on the fact
By
Ecosystems, Species Management Research Program, Fort Collins Science Center, Pacific Island Ecosystems Research Center
September 28, 2015

Ultraviolet vision may be widespread in bats

Insectivorous bats are well known for their abilities to find and pursue flying insect prey at close range using echolocation, but they also rely heavily on vision. For example, at night bats use vision to orient across landscapes, avoid large obstacles, and locate roosts. Although lacking sharp visual acuity, the eyes of bats evolved to function at very low levels of illumination. Recent evidence
By
Ecosystems, Pacific Island Ecosystems Research Center
September 3, 2015

1. Determining the detailed movements of individual animals often requires them to carry tracking devices, but tracking broad-scale movement of small bats (< 30g) has been limited by transmitter technology and long-term attachment methods. This limitation inhibits our understanding of bat dispersal and migration, particularly in the context of emerging conservation issues like fatalities at wind t
By
Ecosystems, Species Management Research Program, Fort Collins Science Center
September 3, 2015

Not to put too fine a point on it - does increasing precision of geographic referencing improve species distribution models for a wide-ranging migratory bat?

Bat specimens held in natural history museum collections can provide insights into the distribution of species. However, there are several important sources of spatial error associated with natural history specimens that may influence the analysis and mapping of bat species distributions. We analyzed the importance of geographic referencing and error correction in species distribution modeling (SD
By
Ecosystems, Energy & Wildlife (unpublished), Fort Collins Science Center
September 30, 2014

It is, according to an old proverb, “better to light a candle than to curse the darkness.” And those of us trying to discover new insights into the mysterious lives of bats often do a lot of cursing in the darkness. Bats do most things under cover of night, and often in places where humans and most other animals can’t go. This dark inaccessibility is great for bats, but not so great for those of u
By
Ecosystems, Fort Collins Science Center
September 30, 2014

Behavior of bats at wind turbines

Long-distance migration evolved independently in bats and unique migration behaviors are likely, but because of their cryptic lifestyles, many details remain unknown. North American hoary bats (Lasiurus cinereus cinereus) roost in trees year-round and probably migrate farther than any other bats, yet we still lack basic information about their migration patterns and wintering locations or strategi
By
Ecosystems, Energy & Wildlife (unpublished), Fort Collins Science Center
February 5, 2014

Critics of the market-based, ecosystem services approach to biodiversity conservation worry that volatile market conditions and technological substitutes will diminish the value of ecosystem services and obviate the “economic benefits” arguments for conservation. To explore the effects of market forces and substitutes on service values, we assessed how the value of the pest-control services provid
By
Energy & Wildlife (unpublished), Groundwater and Streamflow Information Program, Geosciences and Environmental Change Science Center, John Wesley Powell Center for Analysis and Synthesis