Petrogenesis and REE Metallogenesis of 1.4 Ga Magmatism in the Conterminous U.S. Completed

The significance of 1.4 Ga A-type granitoids (granitic rock) in the geologic evolution of the conterminous United States has been well established since Anderson (1983) compiled and synthesized available data pertinent to these rocks. A-type granites, as originally defined by Loiselle and Wones (1979), are iron-enriched granitoids that occur in an anorogenic (free from mountain-making disturbance), within-continent setting. The importance of A-type granitoid magmatism is underscored by the large-volume magmatic events these rocks depict as well as their broad geographic distribution and association with mineral deposits. It is not well known whether 1.4 Ga magmatism is related to secular (slow, steady) evolution of terrestrial tectonic processes, a special case of crustal melting of thin young crust, and/or differentiation of mafic crust. Similarly, the characteristics of 1.4 Ga intrusive rocks known to be associated with rare earth element mineral deposits that distinguish them from similar rocks that lack these types of mineral deposits are not well constrained. Consequently, seeking answers to these questions and developing the associated knowledge is critical to the Mineral Resource Program and their efforts to conduct more accurate mineral resource assessments.

We evaluated the petrology and metallogeny of rare earth element-mineralized 1.4 Ga intrusive systems at Mountain Pass and in the St. Francois Mountains relative to those of other, apparently unmineralized 1.4 Ga intrusive systems in the conterminous U.S. The principal objective was to fully characterize, using existing data, the petrochemical and isotopic attributes as well as the large-scale tectonic setting of particularly well-studied 1.4 Ga intrusions of the conterminous U.S. and, for comparative purposes, synthesize information for the full suite of these 1.4 Ga magmatic systems. We investigated the petrochemical, petrographic, and isotopic character of particular 1.4 Ga intrusions known to have temporal and genetic associations with rare earth element deposits (especially those at Mountain Pass and in the St. Francois Mountains) and to compare and contrast their attributes with those of apparently barren systems.

Petrogenetic Interpretation of Existing Geochemical Data: Basic geochemical parameters were established for well-studied 1.4 Ga intrusive bodies. We characterized how their geochemistry is distinct relative to that of similar, but mineralized, systems. We drew compositional distinctions between those 1.4 Ga igneous systems with associated mineral deposits and those without. Our investigations included detailed evaluations of particular, especially well-characterized systems in order to establish the geochemical evolution of associated magma reservoirs and whether particular magma evolution pathways were more conducive to formation of mineralizing systems than others.

Evaluation of Radiogenic Isotope Data: We used available radiogenic isotope data to evaluate the spatial-temporal secular variation of the broadly 1.4 Ga magmatism in the conterminous U.S. and to evaluate whether magmatism associated with specific times or spatial domains was more conducive to REE mineral deposit formation than others. Radiogenic tracer data were applied to determine whether magma derived from a particular source or containing distinct contaminants is more likely to be associated with mineralization. We incorporated previously unpublished USGS data from two critical regions (the Northern Rocky Mountains and the Southwest U.S.), where excellent exposures of 1.4 Ga intrusions in their country rock context are plentiful, to provide vital direct observations about tectonic setting for the best-characterized intrusions.

Evaluation of the Tectonic / Petrologic Framework: A critical component of this investigation included evaluating the region-scale tectonic/petrologic framework in which each of these magmatic/mineralizing systems developed. Concepts already advanced by the Basement Tectonic Framework of the U.S. Project and the resulting basement domain map (Lund and others, 2015) pertaining to the geologic structures and processes responsible for growth of North America provided the essential framework within which to consider and interpret 1.4 Ga magmatism and associated mineralization within the conterminous U.S. The age and isotopic characteristics of the basement province from which various 1.4 Ga magmas were produced and whether certain basement provinces enhance potential for associated REE mineral deposits were determined by application of available radiogenic data. 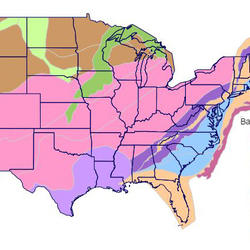 Basement Tectonic Framework of the U.S.: Role of Cratonization of Juvenile Crust and Structural Modification in Forming Metallogenic Provinces

Project objectives were to publish a map of the nation's geologic basement. The map portrayed these pieces (domains) from the most ancient to recent, by the events that influenced their composition, starting with their origin.
By
Mineral Resources Program, Geology, Geophysics, and Geochemistry Science Center
link
September 30, 2013

Basement Tectonic Framework of the U.S.: Role of Cratonization of Juvenile Crust and Structural Modification in Forming Metallogenic Provinces

Project objectives were to publish a map of the nation's geologic basement. The map portrayed these pieces (domains) from the most ancient to recent, by the events that influenced their composition, starting with their origin.
Learn More

Review of the geochemistry and metallogeny of approximately 1.4 Ga granitoid intrusions of the conterminous United States

The conterminous United States hosts numerous volumetrically significant and geographically dispersed granitoid intrusions that range in age from 1.50 to 1.32 billion years before present (Ga). Although previously referred to as A-type granites, most are better described as ferroan granites. These granitoid intrusions are distributed in the northern and central Rocky Mountains, the Southwest, the
By
Mineral Resources Program, Geology, Geophysics, and Geochemistry Science Center
August 10, 2015

Introduction The purpose of this report is to present available geochemical, modal, and geochronologic data for approximately 1.4 billion year (Ga) A-type granitoid intrusions of the United States and to make those data available to ongoing petrogenetic investigations of these rocks. A-type granites, as originally defined by Loiselle and Wones (1979), are iron-enriched granitoids (synonymous with
By
Mineral Resources Program, Geology, Geophysics, and Geochemistry Science Center, Geosciences and Environmental Change Science Center