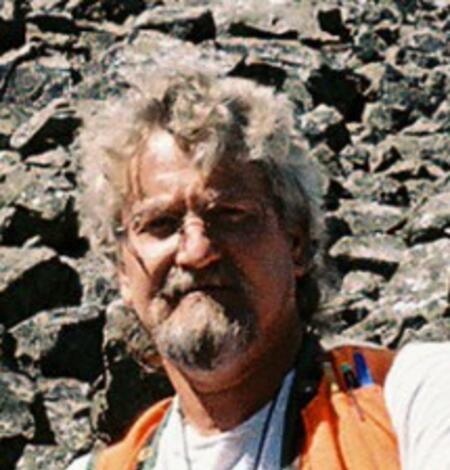 Hired by the US Geological Survey in 1984, he worked first as the laboratory manager for Dr Mitsunobu Tatsumoto under the Upper Mantle Research Project within the USGS. At that time, he oversaw the work of many post-doc visitors to Tatsumoto's laboratories including Patrick E Smith (Toronto, Canada), Yoichi Nakamura (Utsunomiya, Japan), Jun-wen Wang (Guanghou, China), Asish Basu (U Rochester NY), Keiji Misawa (Kobe, NIPR, Tokyo, Japan), Marc Brouxel (Metz, France), C. Mark Fanning (ANU, Canberra, Australia), Holly Stein (Colorado State U), Noriko Kita (U Wisconsin) among others. Subsequently he did his first research on a variety of lunar samples, investigating the various Pb isotopic components of Moon rocks and later meteorites. He was promoted to research grade in 1993, continuing to work on lunar samples for the next 4 years, but adding terrestrial research to the palette. Among the many projects he was involved in over the next 20 years, a few standout: U-Pb zircon geochronology and Pb-Sr-Nd isotopic work on the Peninsular Ranges batholith, southern California; Age and origin of the Greens Creek Mine, Admiralty Island, Alaska; Pb-Sr studies of the MVT ore deposits of the Cevennes Region, southern France, U-Pb zircon geochronology and Pb-Sr-Nd isotopic work of the Proterozoic Colorado Province; and Age and origin of the Mountain Pass REE deposit, southern California. 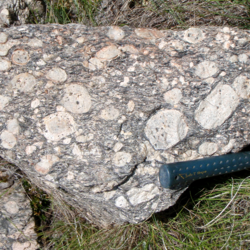 Petrogenesis and REE Metallogenesis of 1.4 Ga Magmatism in the Conterminous U.S.

This project evaluated the petrology and metallogeny of rare earth element-mineralized 1.4 Ga intrusive systems at Mountain Pass and in the St. Francois Mountains relative to those of other, apparently, unmineralized 1.4 Ga intrusive systems in the conterminous U.S.
By
Mineral Resources Program, Geology, Geophysics, and Geochemistry Science Center
link
September 30, 2016

Petrogenesis and REE Metallogenesis of 1.4 Ga Magmatism in the Conterminous U.S.

This dataset is the assembled analytical results of geochemical, petrographic, and geochronologic data for samples, principally those of unmineralized Tertiary volcanic rocks, from the Tonopah, Divide, and Goldfield mining districts of west-central Nevada. Much of the data presented here for the Tonopah and Divide districts are for samples collected by Bonham and Garside (1979) during geologic map
By
Mineral Resources Program, Geology, Geophysics, and Geochemistry Science Center, Geology, Minerals, Energy, and Geophysics Science Center
November 6, 2018

This 1:50,000-scale U.S. Geological Survey geologic map represents a compilation of the most recent geologic studies of the upper Arkansas River valley between Leadville and Salida, Colorado. The valley is structurally controlled by an extensional fault system that forms part of the prominent northern Rio Grande rift, an intra-continental region of crustal extension. This report also incorporates
By
Groundwater and Streamflow Information Program, Geosciences and Environmental Change Science Center
January 3, 2014

The Harvard Lakes 1:24,000-scale quadrangle spans the Arkansas River Valley in central Colorado, and includes the foothills of the Sawatch Range on the west and Mosquito Range on the east. The Arkansas River valley lies in the northern end of the Rio Grande rift and is structurally controlled by Oligocene and younger normal faults mostly along the west side of the valley. Five separate pediment su
By
Groundwater and Streamflow Information Program, Geosciences and Environmental Change Science Center
November 21, 2011

The Bailey, Colo. 1:100,000-scale quadrangle lies within two physiographic and geologic provinces in central Colorado: 1) the Front Range and 2) South Park. Most of the Front Range is composed of Proterozoic rocks ranging in age from 1,790 Ma to 1,074 Ma. Along the eastern flanks and within the Denver Basin, sedimentary rocks ranging from Pennsylvanian to Cretaceous are deformed and steeply tilted
By
Geology, Minerals, Energy, and Geophysics Science Center, Geosciences and Environmental Change Science Center
September 8, 2011

Geologic map of the eastern half of the Vail 30' x 60' quadrangle, Eagle, Summit, and Grand Counties, Colorado

Recent mapping and geochronologic studies for the eastern half of the Vail 1:100,000-scale quadrangle have significantly improved our understanding of (1) Paleoproterozoic history of the basement rocks of the Gore Range and Williams Fork Mountains (western margin of the Front Range), (2) the Late Paleozoic history of the Gore fault system, (3) Laramide contractional tectonism, including deformatio
By
Geology, Minerals, Energy, and Geophysics Science Center, Geosciences and Environmental Change Science Center
September 16, 2008

The Denver West quadrangle extends east-west across the entire axis of the Front Range, one of numerous uplifts in the Rocky Mountain region in which Precambrian rocks are exposed. The history of the basement rocks in the Denver West quadrangle is as old as 1,790 Ma. Along the east side of the range, a sequence of sedimentary rocks as old as Pennsylvanian, but dominated by Cretaceous-age rocks, ov
By
Geosciences and Environmental Change Science Center
Filter Total Items: 64
December 4, 2020

The Anatolia (Eurasia), Arabia, and Africa tec­tonic plates intersect in southeast Turkey, near the Gulf of İskenderun, forming a tectonically active and unstable triple junction (the A3 triple junction). The plate boundaries are marked by broad zones of major, dominantly left-lateral transform faults including the East Anatolian fault zone (the Anato­lia-Arabia boundary) and the Dead Sea fault zo
By
Geology, Geophysics, and Geochemistry Science Center
May 21, 2019

The purpose of this report is to summarize geochemical, petrographic, and geochronologic data for samples, principally those of unmineralized Tertiary volcanic rocks, from the Tonopah, Divide, and Goldfield mining districts of west-central Nevada (fig. 1). Much of the data presented here for the Tonopah and Divide districts are for samples collected by Bonham and Garside (1979) during geologic map
By
Geology, Geophysics, and Geochemistry Science Center, Geosciences and Environmental Change Science Center
March 27, 2018

Review of the geochemistry and metallogeny of approximately 1.4 Ga granitoid intrusions of the conterminous United States

The conterminous United States hosts numerous volumetrically significant and geographically dispersed granitoid intrusions that range in age from 1.50 to 1.32 billion years before present (Ga). Although previously referred to as A-type granites, most are better described as ferroan granites. These granitoid intrusions are distributed in the northern and central Rocky Mountains, the Southwest, the
By
Mineral Resources Program, Geology, Geophysics, and Geochemistry Science Center
June 27, 2017

U-Pb ages and geochemistry of zircon from Proterozoic plutons of the Sawatch and Mosquito ranges, Colorado, U.S.A.: Implications for crustal growth of the central Colorado province

A broad study of zircons from plutonic rocks of the Sawatch and Mosquito ranges of west-central Colorado (U.S.A.) was undertaken to significantly refine the magmatic chronology and chemistry of this under-studied region of the Colorado province. This region was chosen because it lies just to the north of the suspected arc-related Gunnison-Salida volcano-plutonic terrane, which has been the subject
By
Geology, Minerals, Energy, and Geophysics Science Center, Geology, Geophysics, and Geochemistry Science Center
August 10, 2015

Introduction The purpose of this report is to present available geochemical, modal, and geochronologic data for approximately 1.4 billion year (Ga) A-type granitoid intrusions of the United States and to make those data available to ongoing petrogenetic investigations of these rocks. A-type granites, as originally defined by Loiselle and Wones (1979), are iron-enriched granitoids (synonymous with
By
Mineral Resources Program, Geology, Geophysics, and Geochemistry Science Center, Geosciences and Environmental Change Science Center
February 1, 2014

Volcanic rocks near Yampa, Colorado (USA), represent one of several small late Miocene to Quaternary alkaline volcanic fields along the northeast margin of the Colorado Plateau. Basanite, trachybasalt, and basalt collected from six sites within the Yampa volcanic field were investigated to assess correlations with late Cenozoic extension and Rio Grande rifting. In this paper we report major and tr
By
Energy and Minerals, Mineral Resources Program, Geology, Geophysics, and Geochemistry Science Center, Geosciences and Environmental Change Science Center
January 1, 2014

Pb-Sr-Nd-O isotopic characterization of Mesozoic rocks throughout the northern end of the Peninsular Ranges batholith: Isotopic evidence for the magmatic evolution of oceanic arc–continental margin accretion during the Late Cretaceous of southern Californ

The thermochronology for several suites of Mesozoic metamorphic and plutonic rocks collected throughout the northern Peninsular Ranges batholith (PRB) was studied as part of a collaborative isotopic study to further our understanding of the magmatic and tectonic history of southern California. These sample suites include: a traverse through the plutonic rocks across the northern PRB (N = 29), a tr
By
Geology, Minerals, Energy, and Geophysics Science Center, Geology, Geophysics, and Geochemistry Science Center
January 1, 2014

Age and isotopic systematics of Cretaceous borehole and surface samples from the greater Los Angeles Basin region: Implications for the types of crust that might underlie Los Angeles and their distribution along late Cenozoic fault systems

Nine U-Pb zircon ages were determined on plutonic rocks sampled from surface outcrops and rock chips of drill core from boreholes within the greater Los Angeles Basin region. In addition, lead-strontium-neodymium (Pb-Sr-Nd) whole-rock isotopic data were obtained for eight of these samples. These results help to characterize the crystalline basement rocks hidden in the subsurface and provide inform
By
Groundwater and Streamflow Information Program, Geosciences and Environmental Change Science Center
January 1, 2014

Precise determination of δ88Sr in rocks, minerals, and waters by double-spike TIMS: A powerful tool in the study of chemical, geologic, hydrologic and biologic processes