Coral/algal heads in an ancient reef

This project studies past high sea levels on coastlines that preserve fossil coral reefs or marine terraces. We ascertain the magnitudes of sea-level high stands by field mapping, stratigraphic measurements, and precise elevation measurements. Geochronology is accomplished by radiocarbon dating of mollusks (for Holocene-to-last-glacial deposits), uranium-series dating of corals (for high-sea stands back to about 500,000 years old) and strontium-isotope measurements of mollusks (for high-sea stands older than about 300,000 years). It is possible to determine the past water temperatures of the oceans during these high sea stands by detailed paleozoogeographic interpretations of fossil mollusk assemblages, a time-tested traditional method of paleoclimatic studies in marine settings. We also study the effects of sea level changes on coastal river systems and dunes.

The geomorphic record of sea level change on an uplifting coastline

Why is this research important?

One of the most pressing issues in studies of climate change is the possible rise of sea level due to loss of major ice sheets, which would impact population, infrastructure, and habitats along the world's coastlines. It is not known which polar ice sheets (Greenland, West Antarctic, East Antarctic) are most at risk for mass loss that could contribute to sea level rise. Furthermore, it is not known what the possible magnitude of sea level rise is under interglacial climate conditions, how rapidly sea level may rise, or how long high sea levels may be retained. The goals of this project are to shed light on these questions by studying warm climate analogs of the geologic past.

How high was sea level during the last interglacial period?

The research conducted by this project attempts to answer these questions raised in the Intergovernmental Panel on Climate Change (IPCC) 2014 report:

What have we learned from the last interglacial?

What fossil corals can tell us

Corals are the only organisms that take up uranium from the ocean. Thus, they are the only fossils that we can use for high-precision uranium-series dating, one of our major tools to determine ages of marine deposits.

How long did the last interglacial period last?

These maps show the places where we have found either fossil coral reefs (tropical locations) or coral-bearing marine terraces (California) that have been dated by uranium-series methods to the last interglacial period. On each map, you can see the range of ages we have gotten from dating these corals that tell us how long this high-sea stand lasted.

How high was sea level in the last interglacial period?

How warm was the ocean during the last interglacial period?

It is possible to determine the past water temperatures of the oceans during these high sea stands by detailed paleozoogeographic interpretations of fossil mollusk assemblages, a time-tested traditional method of paleoclimatic studies in marine settings. These maps show how marine invertebrates, now found only in warm waters farther south at present, expanded northward beyond their present ranges, during a warm last interglacial period. 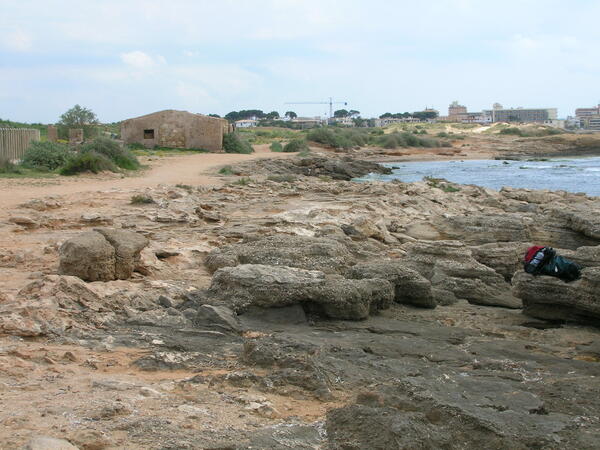 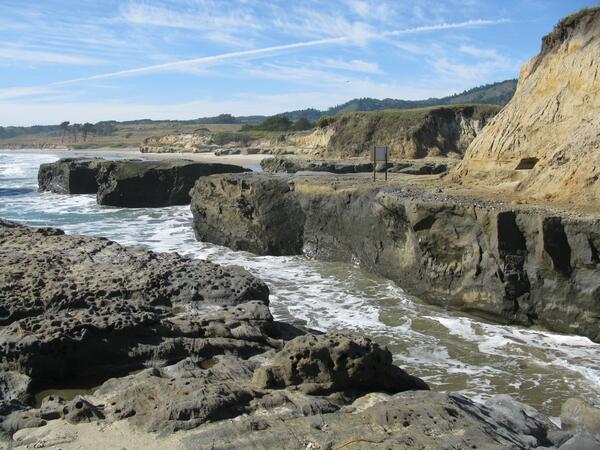 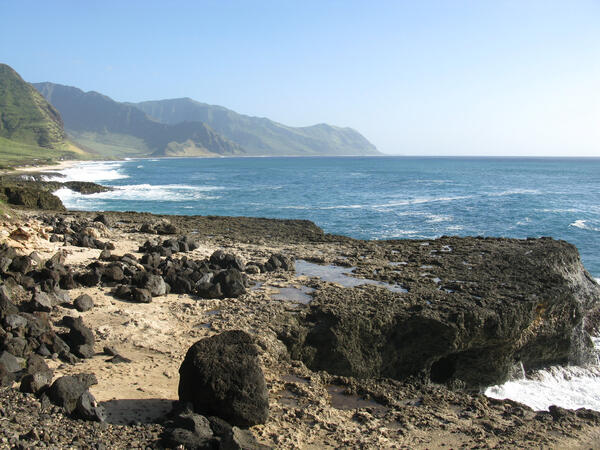 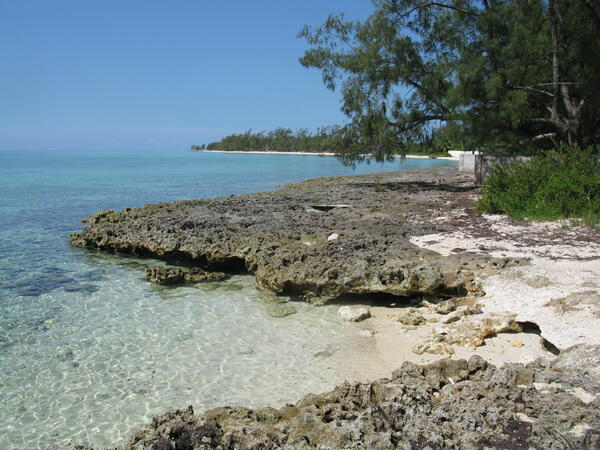 Quaternary vertebrate fossils, most notably mammoth remains, are relatively common on the northern Channel Islands of California. Well-preserved cranial, dental, and appendicular elements of Mammuthus exilis (pygmy mammoth) and Mammuthus columbi (Columbian mammoth) have been recovered from hundreds of localities on the islands during the past half-century or more. Despite this paleontological weal
By
Climate Research and Development Program, Groundwater and Streamflow Information Program, Geosciences and Environmental Change Science Center
July 22, 2016

Santa Rosa Island (SRI) is one of four east-west aligned islands forming the northern Channel Islands chain, and one of the five islands in Channel Islands National Park, California, USA. The island setting provides an unparalleled environment in which to record the response of fluvial systems to major changes of sea level. Many of the larger streams on the island occupy broad valleys that have be
By
Climate Research and Development Program, Groundwater and Streamflow Information Program, Geosciences and Environmental Change Science Center
December 3, 2015

The emergent marine deposits of the Mediterranean basin have been recognized as an important record of Quaternary sea level history for more than a century. Previous workers identified what have been interpreted to be two separate high stands of sea in the late Quaternary, namely the “Eutyrrhenian” (thought to be ~ 120 ka) and the “Neotyrrhenian” (thought to be either ~ 100 ka or ~ 80 ka). On Mall
By
Climate Research and Development Program, Groundwater and Streamflow Information Program, Land Change Science Program, Geosciences and Environmental Change Science Center
May 27, 2015

Sea-level rise during the late Pleistocene and early Holocene inundated nearshore areas in many parts of the world, producing drastic changes in local ecosystems and obscuring significant portions of the archeological record. Although global forces are at play, the effects of sea-level rise are highly localized due to variability in glacial isostatic adjustment (GIA) effects. Interpretations of co
By
Climate Research and Development Program, Groundwater and Streamflow Information Program, Geosciences and Environmental Change Science Center
May 27, 2015

The Pacific Rim is a region where tectonic processes play a significant role in coastal landscape evolution. Coastal California, on the eastern margin of the Pacific Rm, is very active tectonically and geomorphic expressions of this include uplifted marine terraces. There have been, however, conflicting estimates of the rate of late Quaternary uplift of marine terraces in coastal California, parti
By
Groundwater and Streamflow Information Program, Geosciences and Environmental Change Science Center
September 17, 2014

Marine invertebrate faunas with mixtures of extralimital southern and extralimital northern faunal elements, called thermally anomalous faunas, have been recognized for more than a century in the Quaternary marine terrace record of the Pacific Coast of North America. Although many mechanisms have been proposed to explain this phenomenon, no single explanation seems to be applicable to all localiti
By
Groundwater and Streamflow Information Program, Geosciences and Environmental Change Science Center
August 28, 2014

Evidence of repeated wildfires prior to human occupation on San Nicolas Island, California

Understanding how early humans on the California Channel Islands might have changed local fire regimes requires a baseline knowledge of the frequency of natural wildfires on the islands prior to human occupation. A sedimentary sequence that was recently discovered in a small canyon on San Nicolas Island contains evidence of at least 24 burn events that date to between ∼37 and 25 ka (thousands of c
By
Groundwater and Streamflow Information Program, Geosciences and Environmental Change Science Center
June 1, 2014

Historical ecology is becoming an important focus in conservation biology and offers a promising tool to help guide ecosystem management. Here, we integrate data from multiple disciplines to illuminate the past, present, and future of biodiversity on California's Channel Islands, an archipelago that has undergone a wide range of land-use and ecological changes. Our analysis spans approximately 20,
By
Ecosystems, Eastern Ecological Science Center, Patuxent Wildlife Research Center, Geosciences and Environmental Change Science Center
January 1, 2014

Over a span of 50 years, native Californian Donald Lee Johnson made a number of memorable contributions to our understanding of the California Channel Islands. Among these are (1) recognizing that carbonate dunes, often cemented into eolianite and derived from offshore shelf sediments during lowered sea level, are markers of glacial periods on the Channel Islands; (2) identifying beach rock on the
By
Groundwater and Streamflow Information Program, Geosciences and Environmental Change Science Center
January 1, 2014

We present the first U-series ages of corals from emergent marine deposits on the Canary Islands. Deposits at + 20 m are 481 ± 39 ka, possibly correlative to marine isotope stage (or MIS) 11, while those at + 12 and + 8 m are 120.5 ± 0.8 ka and 130.2 ± 0.8 ka, respectively, correlative to MIS 5.5. The age, elevations, and uplift rates derived from MIS 5.5 deposits on the Canary Islands allow calcu
By
Groundwater and Streamflow Information Program, Geosciences and Environmental Change Science Center
January 1, 2014

Santa Rosa Island (SRI) is the second-largest of the California Channel Islands. It is one of 4 east–west aligned islands forming the northern Channel Islands chain, and one of the 5 islands in Channel Islands National Park. The landforms, and collections of landforms called landscapes, of Santa Rosa Island have been created by tectonic uplift and faulting, rising and falling sea level, landslides
By
Groundwater and Streamflow Information Program, Geosciences and Environmental Change Science Center