Platinum group elements, also known as PGEs, are a group of elements that have specific properties which make them useful for various applications in industry. One geologic setting that contains large concentrations of platinum group elements is layered mafic intrusions. This project will use new and preexisting geophysical datasets to characterize the internal structure of layered intrusions. Datasets include magnetic, gravity, magnetotellurics, and seismic tomography.

Layered mafic intrusions form as magma rises, cools, and crystallizes in the earth’s crust. They have specific chemistry and pattern of mineral crystallization and are often associated with continental rifting events. The Midcontinent Rift system found in the United States has a number of these intrusions; however, the intrusions in this area are not as well studied or understood as other systems around the world.

This project will use new and preexisting geophysical datasets to characterize the internal structure of layered intrusions. Datasets include magnetic, gravity, magnetotellurics, and seismic tomography. Analyses completed for better exposed and more thoroughly studied intrusions around the world (Great Dyke, Zimbabawe, Muskox, Canada, and Skaergaard, Greenland) will be used as a starting point to identify key geophysical signatures that correspond with high concentration areas of critical minerals. The same analyses will be completed and applied to the less studied Duluth and Beaver Bay Complex, Minnesota, Mellen Complex, Wisconsin, and Glen Mountains Complex, Oklahoma.

This project will focus on three objectives:

Potential result of our research

The potential for certain magmatic ore deposits is directly related to the internal structure of intrusions; the results of the study will be used to constrain mineral resource potential. Work will focus on intrusions of the Duluth, Beaver Bay, Mellen along with the the Glen Mountains, Oklahoma. The proposed work will also consider how sedimentary basins localize the emplacement of intrusions in the crust and provide sulfur sources leading to deposits within an intrusion.

Characterize known and suspected feeder zones for large layered intrusions: The character, mineralogy, and chemistry of the large layered intrusions vary based on location within the intrusion. Platinum group element concentrations increase near feeder zones, therefore it is beneficial to understand this zone as much as possible. Three dimensional (3D) inversion and advanced geophysical analysis will be used to constrain the physical state, tectonic history, and geodynamic processes of the regions underlying large igneous provinces. 3D views of electrical conductivity variations in the crust and upper mantle will be developed from magnetotellurics studies using existing regional and new detailed data.

Characterize layering of layered mafic intrusions: The potential for certain magmatic ore deposits is directly related to the internal structure of the intrusions. One way to better map the internal structure is to look at the magmatic layering and its relation to feeder zones. For this task, interpretation techniques of magnetic and electromagnetic data previously applied to the Stillwater and Bushveld intrusions will be applied to the Duluth Complex, Minnesota, the Mellen Complex, Wisconsin, and the Glen Mountains Complex, Oklahoma.

Mapping sedimentary basement rocks beneath layered mafic intrusions: Sulfur isotope studies of other magmatic ore deposits indicate that external sources of sulfur are necessary for their formation. However, little attention has been given to mapping the rocks that may be the source of the sulfur or to considering mass balance relations. This task will consider how the sedimentary basin rocks beneath the intrusions localize the emplacement of intrusions in the crust and provide sulfur sources leading to deposits within an intrusion. The Animikie Basin and the Duluth Complex provide an opportunity to model this interaction using preexisting and new electromagnetic and magnetotelluric data.

Advanced Geophysical Characterization of Layered Mafic and Ultramafic Intrusions (2013-2015): Initial studies were conducted to characterize and model the geology and mineral resource potential of layered intrusions in the U.S. based on advanced analysis of geophysical data typically used in exploration (gravity, magnetic, and shallow electromagnetic methods) as well as unconventional data sets (seismic, magnetotelluric) and comparison with the world's largest layered mafic intrusion and source of platinum group elements, the Bushveld Complex in South Africa. Mafic and ultramafic layered intrusions in the U.S. have potential for mineralization that may contain platinum group elements, notably the Stillwater Complex in Montana and the Duluth Complex in Minnesota. 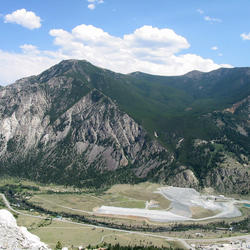 Scientific research can make our resource assessments of critical minerals more effective. This project focuses on the Stillwater Complex, Montana, which has rocks enriched in platinum-group elements (PGE), chromium, cobalt, and nickel. Project objectives are to update databases, evaluate new mapping techniques, document new styles of mineralization, and document and support research on the...
Learn More

This dataset consists of 176 wideband magnetotelluric (MT) stations collected from 2015-2019 across parts of Minnesota, Wisconsin and the Upper Peninsula of Michigan. The U.S. Geological Survey (USGS) acquired these data as part of regional investigations into the geologic and tectonic framework of the area and to support mineral resource investigations. These data have been used to generate a 3D
By
Mineral Resources Program, Geology, Geophysics, and Geochemistry Science Center
November 9, 2021

Gravity data were collected during three separate campaigns during July of 2013, August and September of 2014, and September and October of 2020 at 168 sites on and around the Stillwater layered mafic complex in southern Montana. Measurements were taken with Lacoste &amp; Romberg G-64, G-550, and G-161 gravimeters and reduced to obtain the complete Bouguer anomaly, with reference ties to absolute
By
Geology, Geophysics, and Geochemistry Science Center
June 25, 2020

A helicopter-borne electromagnetic/magnetic survey was flown over the Stillwater area, southwest Montana from May 5 to May 16, 2000. The survey was conducted over the Stillwater Igneous Complex, a Precambrian layered mafic-ultramafic intrusion which is characterized by igneous layering. Electromagnetic data were acquired using DIGHEM helicopter-borne electromagnetic system. Magnetic data were coll
By
Mineral Resources Program, Geology, Geophysics, and Geochemistry Science Center, Geology, Minerals, Energy, and Geophysics Science Center
March 12, 2019

A helicopter-borne electromagnetic/magnetic survey was flown over the Stillwater area, southwest Montana from May 5 to May 16, 2000. The survey was conducted over the Stillwater Igneous Complex, a Precambrian layered mafic-ultramafic intrusion which is characterized by igneous layering. Electromagnetic data were acquired using DIGHEM helicopter-borne electromagnetic system. Magnetic data were coll
By
Mineral Resources Program, Geology, Minerals, Energy, and Geophysics Science Center, Geology, Geophysics, and Geochemistry Science Center

We integrate new high-resolution aeromagnetic data with seismic reflection data, well logs, satellite remote sensing, and field observations to provide a regional view of buried and exposed structures in the Southern Oklahoma Aulacogen and to assess their potential for future seismicity. Trends ranging from NW−SE to ∼E−W, peaking at 330° ± 4.5° and 280° ± 3°, dominate the magnetic lineaments of th
By
Mineral Resources Program, Geology, Geophysics, and Geochemistry Science Center
May 31, 2021

3-D Modeling of the Duluth Complex from geophysical data

The Mesoproterozoic Duluth Complex in northeastern Minnesota is one of the major plutonic components of the Midcontinent Rift System and hosts a variety of copper-nickel sulfide and platinum-group element deposits. The Duluth Complex is composed of a series of individual mafic and felsic intrusions emplaced 1110-1098 Ma within Paleoproterozoic sedimentary rocks of the Animikie basin and volcanic f
By
Geology, Geophysics, and Geochemistry Science Center
April 22, 2021

Geometry of the Bushveld Complex from 3D potential field modelling

A full three-dimensional (3D) potential field model of the central and southern Bushveld Complex reveals information about the Complex in areas obscured by younger geological cover. Previously, two-dimensional gravity models and a few magnetic models limited to certain sections of the Bushveld Complex have been used to propose geometries for the Rustenburg Layered Suite, especially in the western
By
Geology, Geophysics, and Geochemistry Science Center
July 15, 2020

In a subduction zone, the volcanic arc marks the location where magma, generated via flux melting in the mantle wedge, migrates through the crust and erupts. While the location of deep magma broadly defines the arc position, here we argue that crustal structures, identified in geophysical data from the Washington Cascades magmatic arc, are equally important in controlling magma ascent and defining
By
Natural Hazards, Geology, Geophysics, and Geochemistry Science Center
June 1, 2016

Making it and breaking it in the Midwest: Continental assembly and rifting from modeling of EarthScope magnetotelluric data

A three-dimensional lithospheric-scale resistivity model of the North American mid-continent has been estimated based upon EarthScope magnetotelluric data. Details of the resistivity model are discussed in relation to lithospheric sutures, defined primarily from aeromagnetic and geochronologic data, which record the southward growth of the Laurentian margin in the Proterozoic. The resistivity sign
By
Mineral Resources Program, Geology, Minerals, Energy, and Geophysics Science Center, Geology, Geophysics, and Geochemistry Science Center, Advanced Research Computing (ARC)
June 1, 2016

A geologic and mineral exploration spatial database for the Stillwater Complex, Montana

The Stillwater Complex is a Neoarchean, ultramafic to mafic layered intrusion exposed in the Beartooth Mountains in south-central Montana. This igneous intrusion contains magmatic mineralization that is variably enriched in strategic and critical commodities such as chromium, nickel, and the platinum-group elements. One deposit, the J-M Reef, is the sole source of primary production and reserves f
By
Mineral Resources Program, Energy Resources Program, National Laboratories Program, Science and Decisions Center, Geology, Minerals, Energy, and Geophysics Science Center
October 1, 2013

Aeromagnetic data clearly delineate the mafic rocks of the economically significant Bushveld Igneous Complex. This is mainly due to the abundance of magnetite in the Upper Zone of the Rustenburg Layered Suite of the Bushveld, but strongly remanently magnetised rocks in the Main Zone also contribute significantly in places. In addition to delineating the extent of the magnetic rocks in the complex,
By
Geology, Minerals, Energy, and Geophysics Science Center, Geology, Geophysics, and Geochemistry Science Center

Editor:  In the public interest and in accordance with Federal Aviation Administration regulations, the USGS is announcing this low-level airborne...

University of the Witwatersrand, Johannesburg