The USGS Soil-Water-Balance model (SWB) has been used to estimate potential recharge across the State of Maine. The average and range (minimum and maximum) of annual recharge were estimated for the 25-year period from 1990 to 2015.  Datasets of estimated recharge and the modeled uncertainty in the recharge estimates are available for download.

Groundwater recharge is one of the most difficult components of the water cycle to estimate yet is important for the determination of groundwater availability for almost any purpose (for example, withdrawals for irrigation or drinking water or maintenance of in-stream flows for aquatic habitat). Groundwater availability varies greatly across the state. Productive sand and gravel aquifers are spatially discontinuous and cover a relatively small percentage of the landscape, whereas less productive glacial till and bedrock areas cover most of the state. Most of the groundwater usage in Maine falls under three general categories -- private domestic wells, crop irrigation, and public water supply – and is extracted from both productive and relatively non-productive areas of the state.  Recharge rates and aquifer storage generally are the most important factors limiting sustainable use of groundwater.

Prior to this study, there were few published recharge estimates in the state, mostly from calibrated groundwater flow models developed by USGS, and most available estimates are site-specific and cover limited geographic areas. Numerous other site-specific models have been constructed in the state for the analysis of groundwater availability for public drinking water supplies and delineation of wellhead protection zones, but most of the recharge rates used in these models are not available to the public.

To improve the availability of groundwater recharge information, a study was initiated in 2015 in cooperation with the Maine Geological Survey to use the USGS Soil-Water-Balance model (SWB) to evaluate potential recharge across the state.  The goal of the study was to improve understanding of the spatial and temporal variability of recharge to groundwater systems and analyze water budgets across the landscape for the entire state. The SWB model was chosen for this study because it uses readily available datasets that cover the entire state.  The model was used to estimate the average annual potential recharge rate for the entire state, including areas that are relatively inaccessible and unlikely to undergo site-specific hydrogeologic investigations to evaluate recharge.

Land-use data for the Maine SWB model was based on the Maine Land Cover Dataset, which was compressed to 19 land-use classes for this study. The hydrologic soil groups and available water capacity (AWC) were taken from gridded soil survey data from 2016 (the Natural Resources Conservation Service [NRCS] gridded Soil Survey Geographic Database [gSSURGO] data). The hydrologic soil groups are used in SWB alongside land-use classes to classify the landscape into combinations of land use/vegetation and soil texture that should, in theory, transmit water similarly through the rooting zone and unsaturated zone to the water table under the same climatic conditions. Climate data from the Oak Ridge National Laboratory’s DayMet was used for the simulations.

The Maine SWB model was calibrated using parameter estimation techniques to measured base flow and direct runoff data from streamgages in 32 unregulated watersheds across the state and evapotranspiration data from a national dataset (Reitz and others, 2017).  Uncertainty in the recharge estimates was evaluated using a Monte Carlo method which provides a quantitative measure of the uncertainty in the Maine potential recharge grids that is a result of uncertainties in the model parameter values.

The 25-year average potential recharge grids were compared to recharge evaluated through groundwater flow models or other methods in four hydrogeologic settings at six study areas in the State. Several zones in each study area were checked—the average potential recharge and the 95-percent confidence interval in each zone were calculated and compared to the published value. In general, the Maine SWB model reproduced the published values for outwash sand and gravel aquifers better than some other settings. A key factor in the ability of the SWB model to reproduce the earlier study results was whether the AWC data as provided in the gSSURGO data were an appropriate match for the soil hydrologic group. The Maine SWB model does a good job in representing an accurate potential recharge under circumstances where the surficial mapped soils extend below the surface to the water-table aquifer and where the AWC data are in an appropriate range for the hydrologic soil group. One setting where the SWB model has difficulty in representing the potential recharge accurately is where there is a shallow impermeable layer in the unsaturated zone below the mapped soil unit that impeded vertical movement of potential recharge to the aquifer, such as a bedrock surface. Another hydrogeologic setting that was challenging for the model was where a silt and clay layer was below a shallow soil unit that did not have AWC data that were appropriate for the hydrologic soil group. In these cases, typically the AWC data were very low, not accounting for the impedance of water flow provided by the underlying soil.

Compared to previously published large-scale SWB models, the Maine SWB model presents several innovations in model calibration and uncertainty analysis. This is the first published SWB model to incorporate a rigorous parameter estimation calibration that accounts for all three of the main components of the water budged: recharge, runoff, and evapotranspiration (ET), using observations covering 32 calibration watersheds in the State. SWB’s implementation of the Food and Agriculture Organization of the United Nations Drainage and Irrigation Paper 56 (FAO56) ET method was used, which provides more control over the treatment of ET in forests than the standard method. A new approach to displaying uncertainty in the SWB output was applied to the Maine SWB model, using null-space Monte Carlo analysis and several hundred alternate realizations of the model input parameters to derive a standard deviation grid of the final 25-year annual average potential recharge grid.

The final 25-year annual potential recharge data for the State are available for download as ASCII grids along with data on the uncertainty of the modeled estimates (https://doi.org/10.5066/P9052ULY).  The final report describing the entire study and results is located at https://pubs.er.usgs.gov/publication/sir20195125.  The model archive (https://doi.org/10.5066/P9GRP7DH) documents all the model construction and other model information.

The grids of potential annual recharge for Maine are intended to be used to provide first-cut estimates of recharge for geographic areas no smaller than the smallest watersheds used in the calibration of the model—or about 1.5 square miles. It is recommended that the grids are used to calculate an areal average recharge for any given area of study, and an uncertainty around the mean should be calculated from the standard deviation grid at the same time. The user of these data also should familiarize themselves with the model limitations and assumptions are described in the report. 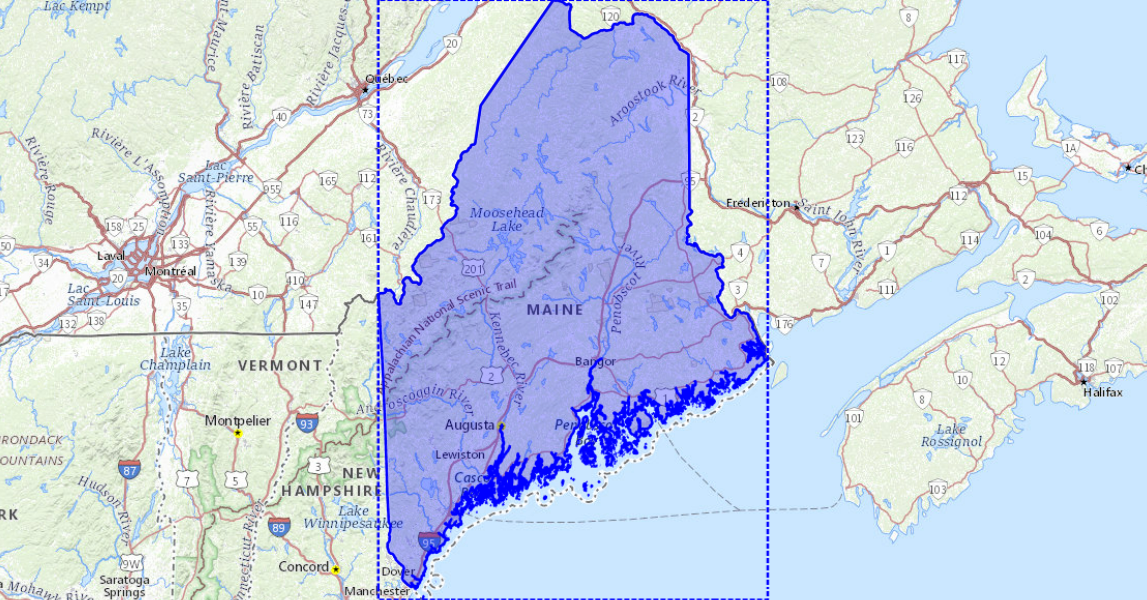 Below are data related to the project

This set of data includes four potential annual recharge grids for the State of Maine that were simulated using the Maine Soil-Water-Balance model for 1991 through 2015. The files include a grid representing the uncertainty in the potential recharge and a grid showing the annual average precipitation from the climate dataset that the simulation is based on. A 25-year simulation of potential rechar
By
New England Water Science Center 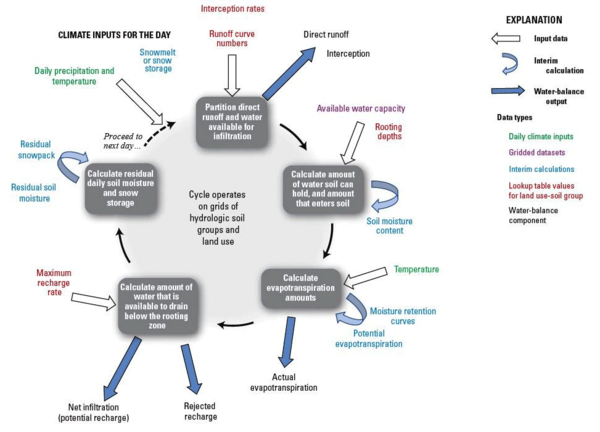 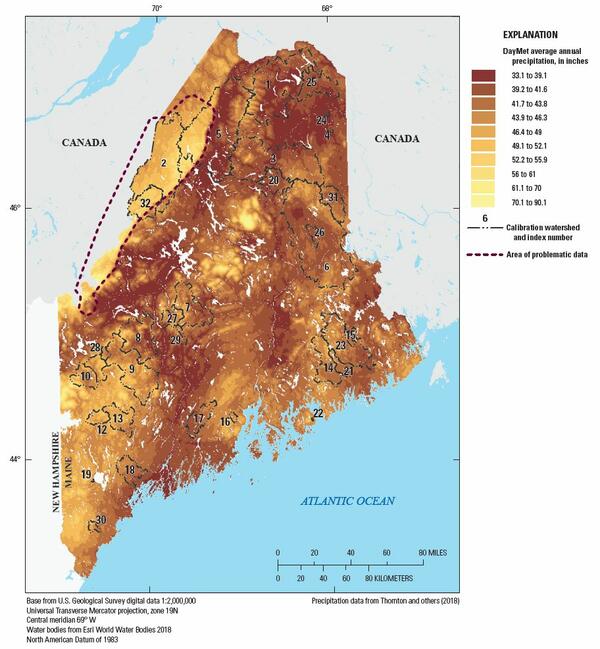 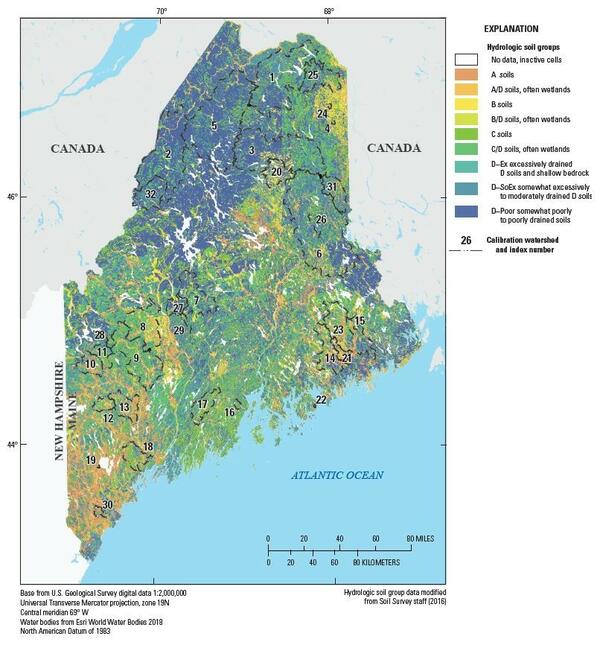 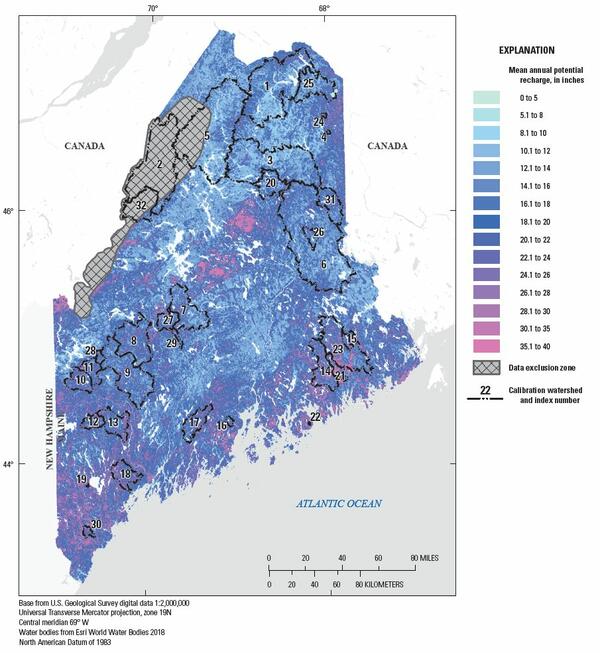 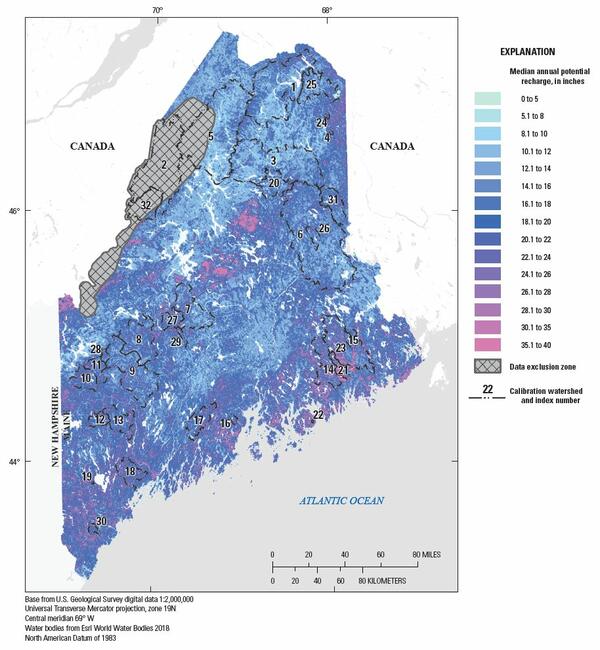 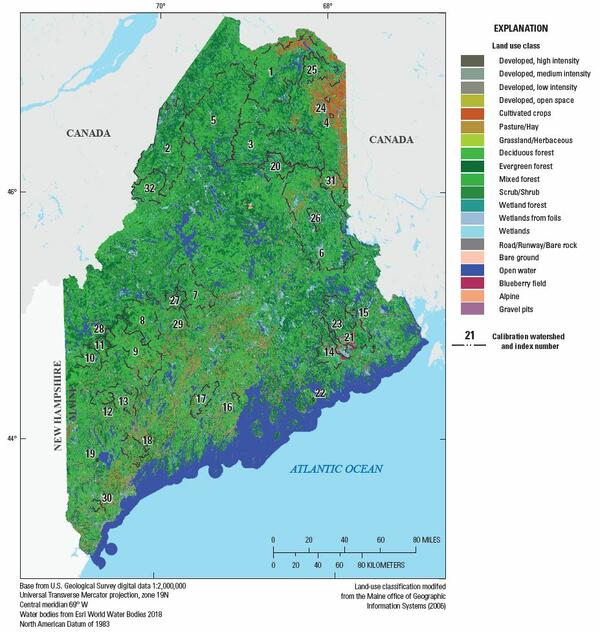 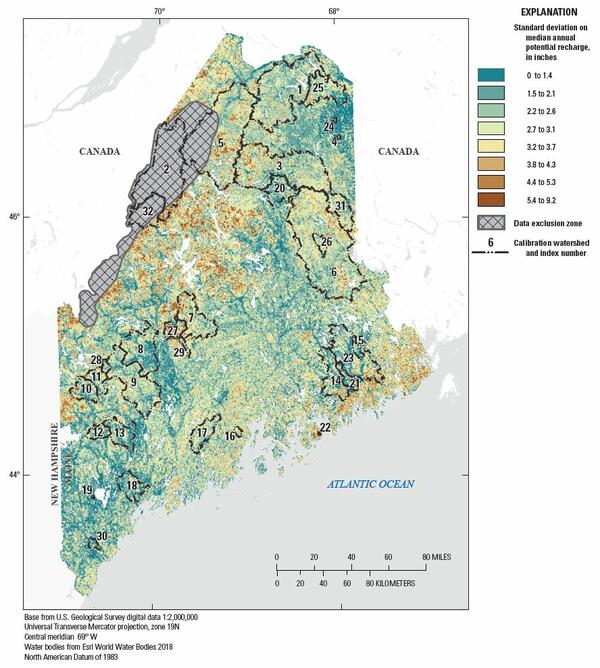 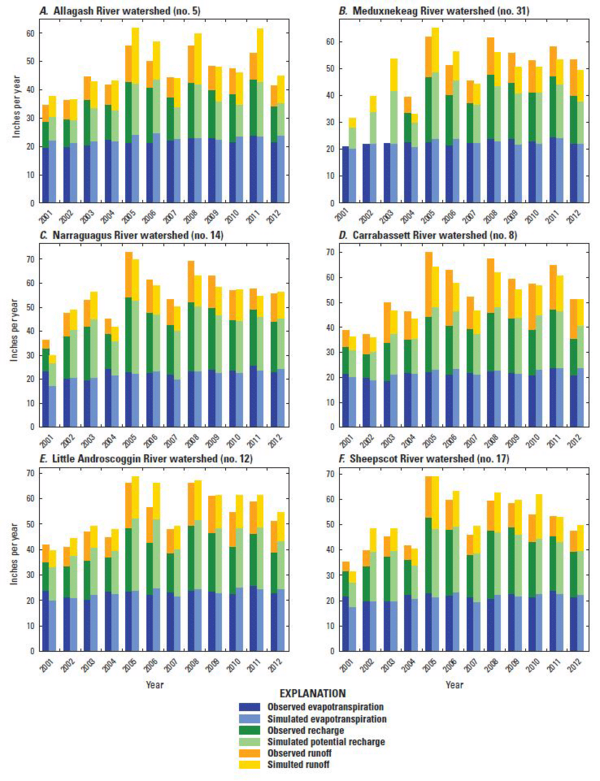 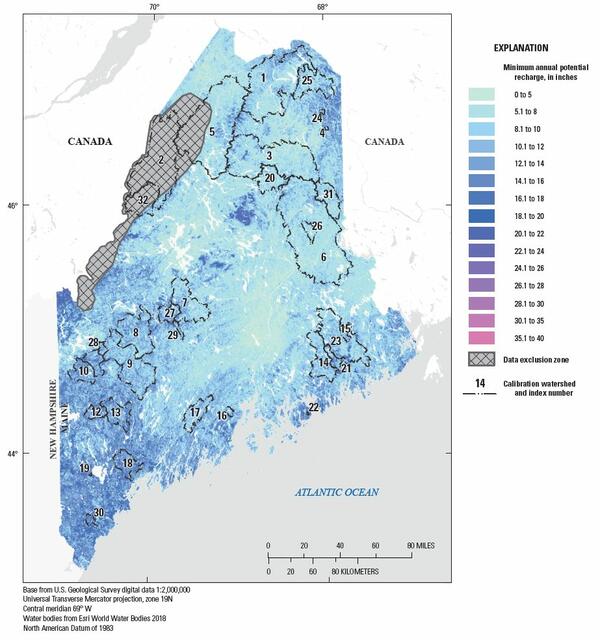 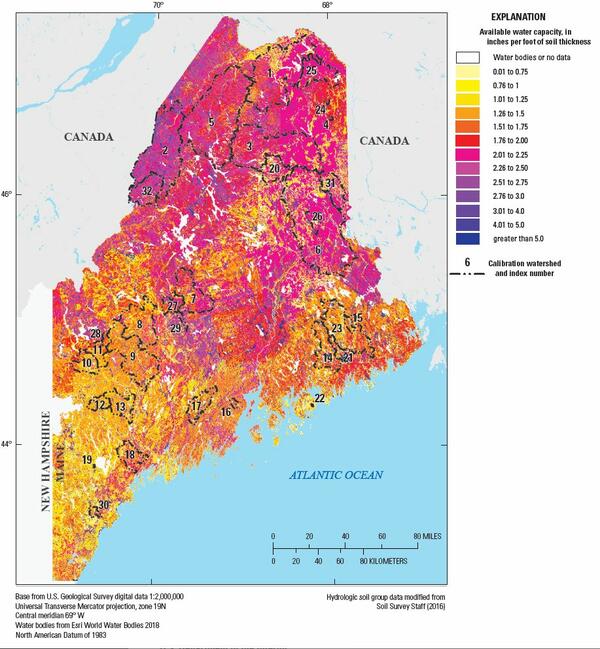 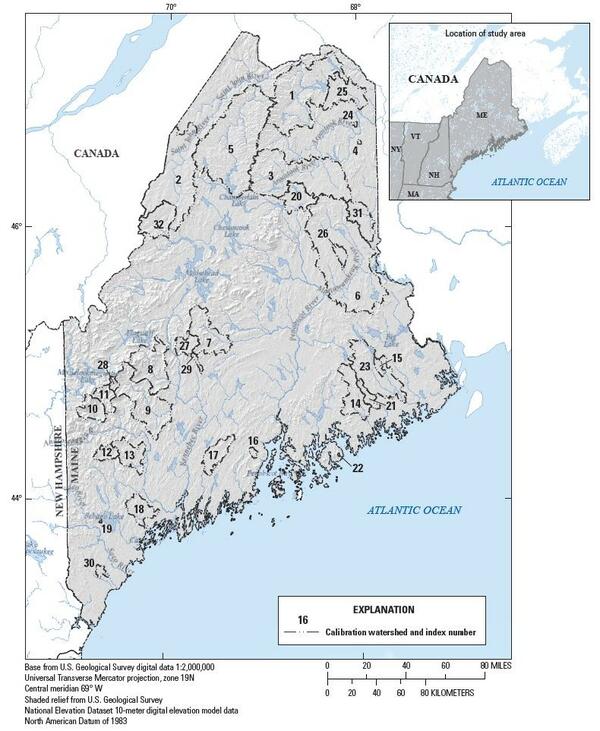 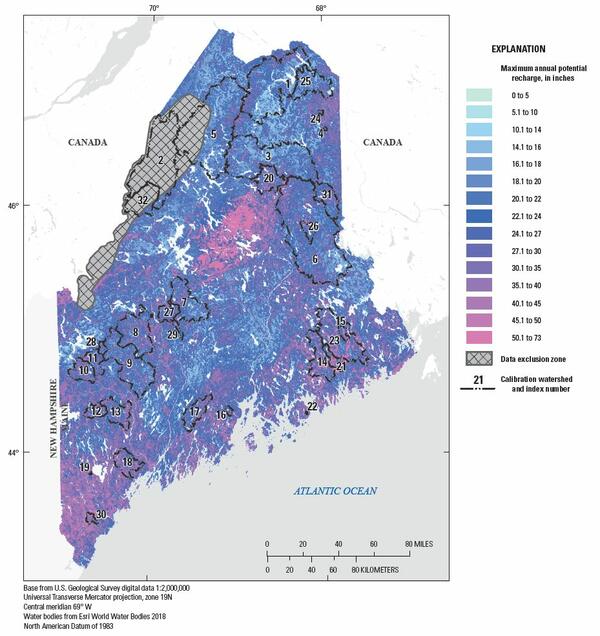 To address the lack of information on the spatial and temporal variability of recharge to groundwater systems in Maine, a study was initiated in cooperation with the Maine Geological Survey to use the U.S. Geological Survey Soil-Water-Balance model to evaluate annual average potential recharge across the State over a 25-year period from 1991 to 2015. The Maine Soil-Water-Balance model was calibrat
By
Water Resources, New England Water Science Center, Upper Midwest Water Science Center
August 19, 2010

A Soil-Water-Balance (SWB) computer code has been developed to calculate spatial and temporal variations in groundwater recharge. The SWB model calculates recharge by use of commonly available geographic information system (GIS) data layers in combination with tabular climatological data. The code is based on a modified Thornthwaite-Mather soil-water-balance approach, with components of the soil-w
By
Water Resources, Upper Midwest Environmental Sciences Center, Upper Midwest Water Science Center