Sea turtles are one of the oldest groups of reptiles and are found worldwide. There are seven species of sea turtles in the world, and Hawaii has two of them, the hawksbill and the far more numerous green turtle. Threats to turtles include by-catch from fisheries activity, over harvesting of eggs on nesting beaches, and disease. Of the latter, the most significant disease of sea turtles is called fibropapillomatosis (FP).

Since 1995, the Honolulu Field Station and National Marine Fisheries Marine Turtle Biology and Assessment Program have had an ongoing collaboration to elucidate the cause and epizootiology of fibropapillomatosis (FP). FP causes unsightly external and internal tumors in sea turtles. It affects mainly green and loggerheads and is found in almost all the tropical marine ecosystems where these species reside. FP has also been documented in other species of sea turtles, but much more infrequently. FP was first described in green turtles from Florida in the early 1920s. In Hawaii, the first record of the disease occurred somewhere about the early to mid-1950s. FP affects mainly immature turtles, and in Hawaii, the percentage of individuals affected can range from 20 to 40% depending on the location. In addition to causing tumors on the skin, eyes, and mouth, about 20-30% of sea turtles with the disease also have tumors in internal organs such as the lungs, kidneys, and heart.

FP was deemed not much more than a curiosity until the 1980s and 90s when serious research began on the disease. Microscopic examination of tumors by researchers as the University of Florida, Gainesville, revealed particles suggestive of a herpes virus. Since herpes viruses are known to cause tumors in animals and humans, this agent as a potential cause of FP was certainly plausible. However, many other things can cause tumors in animals. Investigators in Florida then reproduced the disease in captive green turtles by injecting tumor homogenates that had been filtered to eliminate all but the smallest particles (viruses). In doing so, they were able to reproduce tumors similar to those seen in the wild. This was very compelling evidence that whatever caused the disease, it was either something very small (maybe a virus or protein) but almost certainly not something like a bacterium or parasite that would have been eliminated in the filtration process. Subsequent molecular biology studies have consistently shown the presence of a herpesvirus in tumors.

Effects of FP on turtles

Although FP is a major threat of stranding of sea turtles in Hawaii, the disease is waning in Hawaii for unknown reasons. In contrast, its presence is increasing in Florida, and it has recently appeared in Texas. About 30% of turtles recover from the disease, so it has detrimental effects on affected animals. Turtles with severe FP become immunosuppressed and get secondary bacterial infections. Furthermore, many stranded turtles have concomitant infections with worms that live in blood vessels and cause inflammation of internal organs. Hawaii is also unique in that turtles here get tumors in the glottis (opening to the trachea). This prevents closure of the glottis allowing seawater and food to get into the lungs. Not surprisingly, many turtles that strand with glottal tumors also have infections and inflammation in the lungs. A system to score the severity of FP in Hawaiian green turtles shows that animals with moderate to severe disease have a lower likelihood of being observed again in the wild. All this implies that FP is more than a mere cosmetic disease and warrants further investigation.

Where to go from here?

In order to have any hope of managing this disease, several critical pieces of information are needed. How is the virus transmitted? Why does FP show up more often in what appear to be "degraded" habitats? Does the herpes virus cause the tumors? The presence of a highly visible disease in a large animal like the turtle suggests something is awry with the ecosystem. Understanding why this is so may add a piece to the puzzle of sustainable management of marine ecosystems.

Below are multimedia items associated with this topic. 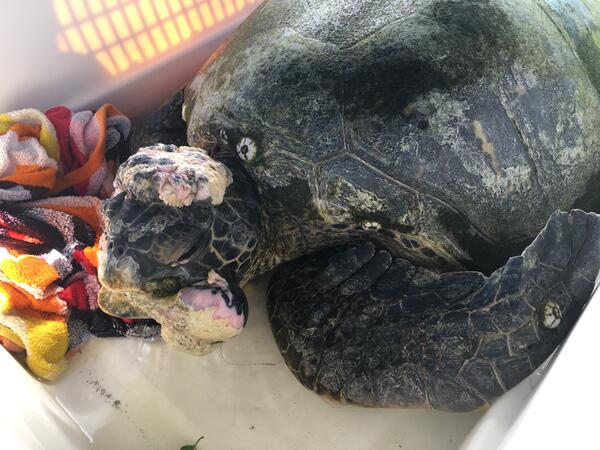 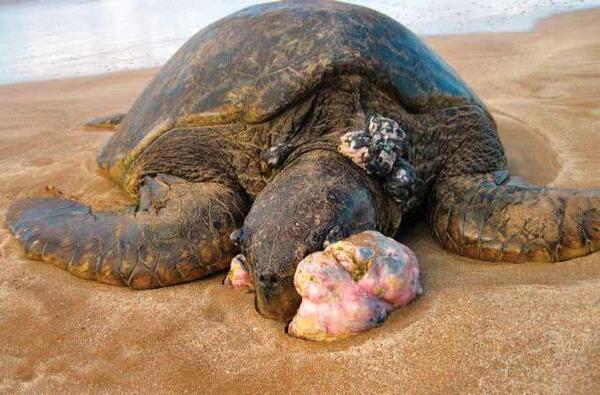 Below are publications associated with this topic.

The present study proposes a new methodology for the quantification of parasite eggs in animal tissue. Quantification of parasites are important to understand epidemiology of spirorchiid infections in sea turtles, however different methodologies for quantifying Spirorchiidae eggs in turtle tissues have been used. The most representative way to quantify Spirorchiidae burdens in tissues is counting
By
Ecosystems, Fish & Wildlife Disease, National Wildlife Health Center
June 27, 2019

Fibropapillomatosis (FP), a debilitating tumor disease of sea turtles, was first identified in green turtles [Chelonia mydas (Linnaeus, 1758)] in Florida in 1938. In recent decades, FP has been observed globally and is an emerging panzootic disease in sea turtles. However, few reports of FP in Asia exist. Here, we provide the first evidence of Chelonid herpesvirus 5 (ChHV5) DNA associated with FP
By
Ecosystems, National Wildlife Health Center
August 24, 2017

In addition to eating contaminated prey, sea turtles may be exposed to persistent organic pollutants (POPs) from ingesting plastic debris that has absorbed these chemicals. Given the limited knowledge about POPs in pelagic sea turtles and how plastic ingestion influences POP exposure, our objectives were to: 1) provide baseline contaminant levels of three species of pelagic Pacific sea turtles; an
By
Ecosystems, National Wildlife Health Center
July 1, 2017

Fibropapillomatosis (FP) is a tumor disease of marine turtles associated with Chelonid herpesvirus 5 (ChHV5) that has historically been refractory to growth in tissue culture. Here, we show for the first time de novo formation of ChHV5-positive intranuclear inclusions in cultured green turtle cells, which is indicative for active lytic replication of the virus. The minimal requirements to achieve
By
Ecosystems, National Wildlife Health Center
May 31, 2017

Ingestion of marine debris is an established threat to sea turtles. The amount, type, color and location of ingested plastics in the gastrointestinal tracts of 55 sea turtles from Pacific longline fisheries from 2012 to 2016 were quantified, and compared across species, turtle length, body condition, sex, capture location, season and year. Six approaches for quantifying amounts of ingested plastic
By
Ecosystems, National Wildlife Health Center
December 30, 2016

Are we working towards global research priorities for management and conservation of sea turtles?

In 2010, an international group of 35 sea turtle researchers refined an initial list of more than 200 research questions into 20 metaquestions that were considered key for management and conservation of sea turtles. These were classified under 5 categories: reproductive biology, biogeography, population ecology, threats and conservation strategies. To obtain a picture of how research is being focu
By
Ecosystems, National Wildlife Health Center, Wetland and Aquatic Research Center
April 11, 2016

Leatherback turtles (Dermochelys coriacea) undergo substantial cyclical changes in body condition between foraging and nesting. Ultrasonography has been used to measure subcutaneous fat as an indicator of body condition in many species but has not been applied in sea turtles. To validate this technique in leatherback turtles, ultrasound images were obtained from 36 live-captured and dead-stranded
By
Ecosystems, National Wildlife Health Center

Below are news stories associated with this topic.

Scientists recently reconstructed the skin of endangered green turtles, marking the first time that skin of a non-mammal was successfully engineered...