Hydrogeologic and Geothermal Conditions of the Northwest Volcanic Aquifers Active

Although sparsely populated, this area in southeastern Oregon, northeastern California, northwestern Nevada, and southeastern Idaho has high geothermal heat flow that may be used to generate large amounts of electricity.

The Pacific Northwest basaltic-rock aquifer terrain has yet to be quantitatively assessed as part of a regional aquifer system. The current study aims to fill this gap, providing improved understanding of groundwater conditions in a large, and mostly unstudied, region of volcanic aquifers in the Northwest.

The Northwest Volcanic Aquifer Study Area (see map, below), lies in the middle of a broad volcanic region of the Northwest, referred to here as the Northwest Volcanic Province. This larger region includes multiple hydrogeologic provinces such as the Columbia Plateau, the Cascade Range, the Modoc Plateau, the High Lava Plains of Oregon, the volcanic Snake River Plain (east to and including parts of the Yellowstone Plateau volcanic field), and the northwest corner of the Basin and Range Physiographic Province. The boundary between the Northwest Volcanic Province and the Basin and Range Province is not well-defined, and is defined for our purposes as the transition in northwestern Nevada from the volcanic dominated areas to the predominant basin and range structures of the Great Basin to the south.

Virtually all regional groundwater flow in the Northwest Volcanic Province occurs in volcanic deposits (largely lava flows) or volcanic-derived basin-filling sediments. Although volcanic deposits of the region span the entire Cenozoic Era, significant groundwater flow is largely restricted to Miocene and younger deposits. Pre-Miocene volcanic deposits, for example the Clarno and John Day Formations, and rocks of the western Cascade Range, tend to have extremely low permeability due to weathering, hydrothermal alteration, and secondary mineralization (Lite and Gannett, 2002, Gannett and others, 2007).

Parts of the Northwest Volcanic Province have been extensively studied under previous USGS efforts. For example, the Columbia Plateau, which occupies much of central and eastern Washington and north-central Oregon was studied under both the Regional Aquifer Systems Analysis program and Groundwater Resources Program Groundwater Availability studies (Vaccaro, 1986; Kahle and others, 2011; Ely and others, 2014). The upper Deschutes and Klamath Basins, which include the eastern flanks of the Cascade Range and adjacent drainage basins in Oregon and northern California, have been studied and modeled under Cooperative Water Program projects (Gannett and others, 2001, 2007). The Snake River Plain was studied under the Regional Aquifer Systems Analysis program program (Lindholm, 1986) and many subsequent regional and local investigations. There remain, however, large tracts of the Northwest Volcanic Province that have never been part of any regional groundwater assessment. Parts of these areas have been included in earlier studies by USGS or individual states, however most of those studies were published more than 20 years ago, and none constitute a systematic coverage of the Northwest Volcanic Aquifer Study Area.

The Northwest Volcanic Aquifer Study Area occupies the largely unstudied parts of the southern Northwest Volcanic Province. The study area boundaries were defined to minimize overlap with previous regional assessments (for example the Columbia Plateau, Oregon Cascade Range, and the Snake River Plain), follow natural hydrogeologic boundaries where possible, and include most of the volcanic aquifers of the original Pacific Northwest basaltic-rock aquifers map (Unit 58) of Reilly and others (2008). The general study area boundaries extend from the Blue Mountain Anticline on the north (which defines the southern boundary of the Columbia Plateau), and the eastern flank of the Cascade Range on the west (extending south into the active volcanic arc in northern California). The southern boundary generally corresponds with the transitional area at the northern edge of the Basin and Range Province as previously described, and the southern edge of the Owyhee Region of southwestern Idaho. The eastern boundary aligns with the eastern edge of the Owyhee volcanic region (the South Hills, Idaho) and follows the extent shown by Reilly and others (2008). The exact boundaries are not yet defined.

The volcanic terrain of the Northwest not only hosts substantial groundwater flow systems, but geothermal systems as well (Williams and others, 2008). The USGS Geothermal Resource Investigations Project, which is supported by the Energy Resources Program, is actively interested in the region. Recent collaborative efforts among scientists in the Water Mission Area and Energy and Minerals Mission Area in the Columbia Plateau (northern Northwest Volcanic Province) have demonstrated the importance of regional groundwater flow in understanding the surface manifestation of regional crustal heat flow patterns (Burns and others, 2015).  While the Water Mission Area effort will be focused on the part of the Northwest Volcanic Province for which the hydrogeology has been studied very little, the Energy and Minerals Mission Area effort will have a larger geographic scope, inclusive of the Snake River Plain and the Columbia Plateau.

Although the NVASA does not include the broad areas of irrigated high-value agriculture such as the Snake River Plain or Columbia Plateau, there is substantial irrigated agriculture in some parts of the study area, and municipalities ranging in population up to 12,000 (Ontario, Oregon). Increasing groundwater demand due to more frequent extended drought, and the associated increases in groundwater rights applications (for example, Harney County, Oregon), is currently challenging water resources management agencies. Another example, the Pit River, originating in the center of the NVASA, is a major tributary to Lake Shasta (the largest reservoir in California), frequently contributing significantly more water than the Sacramento River. Efforts to understand and manage the resource in these areas are hampered by a lack of fundamental information on the hydrogeologic framework, regional flow paths, hydrologic budgets, and large-scale hydraulic characteristics.

In addition to the immediate water-supply management questions, there is considerable need to understand the response of the regional groundwater system to climate change. Local stakeholders and land managers need information on the probable response to climate warming and changes in precipitation both with regard to water supplies and to probable impacts to groundwater dependent ecosystems. The work will provide basic information presently lacking, and will provide a solid foundation for future science and resource management.

Geothermal resources have been evaluated at many locations across the NVP, but most studies have been small-scale (typically less than a few square kilometers). Unlike in the Basin and Range Province to the southeast or the Cascades to the west, there is not yet a single unifying framework to explain the factors controlling the nature and occurrence of hydrothermal systems in this region. This new effort will accomplish a critical first step by synthesizing previous findings into a regional understanding of tectonics, heat flow, and upper crustal permeabilty in the area covered by the Northwest Volcanic Province. In addition to developing a regional framework for the formation of hydrothermal systems, understanding groundwater flow and water availability are critical for future development of Enhanced Geothermal Systems (EGS) resources.

The NVASA is surrounded by five detailed proximal USGS groundwater studies and by five ongoing geothermal play-fairway analysis projects (for description and location of current USDOE projects, see http://www.energy.gov/eere/geothermal/play-fairway-analysis). These studies provide a unique opportunity to systematically examine and transfer major study findings from nearby areas to the NVASA.

The primary objective of this research is to assess the water and geothermal energy resources in the Northwest Volcanic region.  In particular:

This Joint Groundwater and Energy study will be a timely contribution to understanding of regional groundwater flow and geothermal energy potential in a large yet little-studied area of the West, and is a critical first phase of study for the region. Much of the region is semiarid with few large streams, so there is considerable dependence on groundwater for irrigation and public water supplies. The study will compile critical information that will aid water managers in balancing demand and impacts from groundwater development for geothermal development. Potential impacts affect not only water users, but the groundwater-dependent ecosystems that occur throughout much of the area (Brown and others, 2011).

The Columbia River Basalt Group (CRBG) consists of a thick sequence of Miocene flood basalt that covered northern Oregon, eastern Washington, and western Idaho between 17 and 6 million years ago. It is an important regional aquifer system, and, in its folded and faulted flows, it records the late Cenozoic structural evolution of much of the Pacific Northwest.
Learn More
link 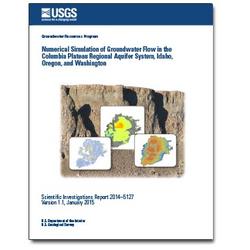 The Columbia Plateau Regional Aquifer System (CPRAS) covers about 44,000 square miles of eastern Oregon and Washington and western Idaho. The primary aquifers are basalts of the Columbia River Basalt Group and overlying basin-fill sediments. Groundwater availability issues in the basin include: 1) widespread water-level declines caused by pumping, 2) reduction in base flow to rivers and associated...
Learn More