Scientists from NOAA Fisheries and the U.S. Geological Survey have embarked on an expedition to explore deep-sea sites being considered for development of floating offshore wind energy turbines off Oregon and Northern California. The research will use remote and autonomous vehicles to search for deep-sea sponges and corals and species of groundfish that inhabit depths to 1,000 feet or more.

The two-week expedition aboard the NOAA Ship Bell M.Shimada is supported by the Department of Interior’s Bureau of Ocean Energy Management (BOEM). The agency has designated the Humboldt wind energy call area off California and the Coos Bay and Brookings call areas off Southern Oregon for auction to wind energy developers.

“This is a rare opportunity to see and document some of these areas for the first time and understand the organisms and species that dwell there,” said Elizabeth Clarke, chief scientist of the expedition, based at NOAA Fisheries’ Northwest Fisheries Science Center. “We want to know what resources are there, and the role they play, which helps us understand how they could be affected.”

The expedition is part of a multiagency collaboration called the Expanding Pacific Research and Exploration of Submerged Systems (EXPRESS) campaign, focused on surveying and identifying deep-sea landscapes and the organisms that live in them. Researchers will visit deep-ocean sites known as “Brush Patch,” “Daisy Bank,” and “Arago Reef,” to document and sample the geology and biology there, collecting photographs, video, environmental DNA (eDNA), and samples of representative corals and sponges.

Earlier research at sea-floor sites off California has revealed a diversity of deep-sea corals and sponges at a wide variety of depths and distances from the West Coast. “Using underwater vehicles equipped with video cameras, we documented nearly 80,000 deep-sea corals off California at depths ranging 75 to 2,844 feet during surveys from 1992 to 2014. And we’ve only surveyed a small portion of the habitat where these animals may live,” said team member Diana Watters, a fisheries biologist with NOAA Fisheries Southwest Fisheries Science Center. The research adds to NOAA Fisheries’ assessments of fish populations and their habitat off the West Coast, which informs fishing seasons and regulations recommended by the Pacific Fisheries Management Council. NOAA Fisheries carries out many mandates of the Magnuson-Stevens Fishery Conservation and Management Act, including the protection of Essential Fish Habitat that may include some of the survey sites.

“By working with a team of scientists with different expertise, we can work together to unravel the mysteries of the deep sea,” said Nancy Prouty, a USGS research oceanographer helping to lead the voyage. “The advanced technology we use also allows us to explore more of the sea-floor than previous EXPRESS expeditions.”

Possible development of the sites is still years away. BOEM has proposed the areas for wind energy leasing, but further study and assessments are needed to understand the biological communities and surrounding geology. Floating wind energy turbines might eventually be held in place by anchors that could rest on or be driven into the ocean floor.

Researchers will use the ROV Beagle, operated by Marine Applied Research and Exploration of Point Richmond, California, tethered to the research ship. In addition, an untethered, autonomously operated vehicle will combine forces with an autonomous glider. Both glide through the water under their own power. For the first time, scientists will also employ the glider to relay signals from the autonomous vehicle, extending its range to more than 25 kilometers, or 15 miles, from the research ship.

“It gives us new flexibility to reach out beyond the limited range we had from the ship before,” Clarke said. “That means we can cover a larger area and make even better use of the limited time we have to survey these areas.”

The research ship will visit about a dozen study locations, beginning with several around the Coos Bay wind site, then work its way south to sites off of Brookings, Oregon, and finally, to the Humboldt call area off Northern California. The photographs, species information, habitat, and other data they collect will help inform BOEM, the Pacific Fishery Management Council, NOAA Fisheries, and others interested in the possible impacts of offshore wind development.

While offshore research can prove unpredictable given the weather and other variables, researchers will document their findings as they continue the survey. Watch NOAA Fisheries and USGS websites for updates and further developments in the expedition. 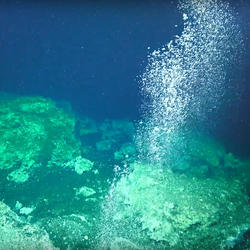 NOAA Fisheries is responsible for the stewardship of the nation's ocean resources and their habitat. The agency provides vital services for the nation...

Researchers from USGS, NOAA, MBARI and BOEM are participating in a 10-day research expedition to assess benthic habitats and associated biota on the U...