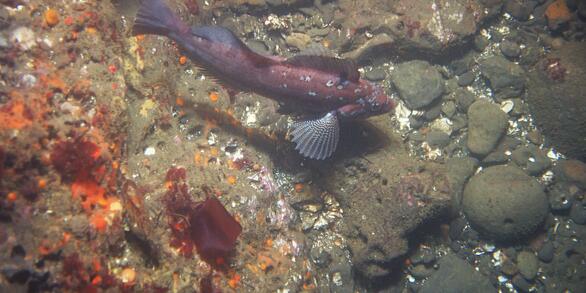 Find map block names and corresponding links to data, read descriptions of the maps in a published block, and see examples of how our data is used in coastal zone management and research.

Sonar mapping of the California State Waters has been completed for the California mainland and is partially complete around California's offshore islands. Please check the Progress page for the latest information.

State-of-the-art multibeam and bathymetric sidescan sonar systems are collecting high-resolution bathymetry and acoustic backscatter data. These data are the foundation on which most of the groundtruthing and derivative products are based.

Bathymetry data (figures 1 and 2) display the shape of the seafloor including rough terrain (possibly rock outcrops), smooth terrain (possibly sedimented), canyons, and anthropogenic features. Acoustic backscatter data (figure 3) show the intensity of the acoustic pulse off the seafloor and back to the ship. Brighter tones indicate a strong intensity (possibly harder seafloor), while darker ones indicate a weaker intensity (possibly softer seafloor). Many seafloor physical parameters influence backscatter intensity but these data are helpful in determining the distribution of seafloor geology (i.e. rock, sand, mud).

Typically, these data are processed on the ship (figure 4) allowing for almost real-time quality control and filling of data gaps.

Video and photography ground-truthing of the California State Waters has also been completed for California's mainland waters. Please check the Progress page for the latest information, and visit the CSMP Video and Photograph Portal, which hosts 550 kilometers (km) of trackline video and 87,000 photographs.

Video, photographs, and real-time observations of seafloor geology and biological cover recorded from a towed camera sled help develop and verify derivative products based on the swath bathymetry and backscatter data.

These data are collected using a camera sled towed about one meter over the seafloor at speeds around one nautical mile/hour. The sled is approximately one-by-one-by-two (1x1x2) meters in size and houses two digital video cameras (one pointing at an angle and one pointing vertically), a 7-megapixel still camera, a high-definition video camera, and paired lasers used for scale. Figure 5 shows the deployment of the camera sled while figure 6 shows its recovery.

Figures 7 and 8 show examples of seafloor video and photographs collected within California State Waters. Figure 7 (top photo) is an example of a seafloor video showing boulders and cobbles, and red gorgonia. The green lights are the paired lasers used to scale features on the seafloor. Figure 8 (bottom photo) is an example of a seafloor photograph showing an almost vertical rock face covered with strawberry anemones.

The towed camera sled video, photographs, and real-time observations are being used to collect presence/absence data of macro-invertebrates and their associated sediment types, depth, and latitude. At the National Marine Fisheries Service (NMFS) this information is entered into programs like PRIMER and R to determine habitat associated community structures and to develop multivariate models using logistic regression to predict the distribution of key species (including some deep-sea coral species). Coupling these results with a seafloor character map with spatial information on sediment type and depth, we hope to map the probability of occurrence of these important communities on a coast-wide scale. These maps will provide managers, policy makers, and the public with information that can be used in the conservation and management of sustainable marine resources. Current analysis is being done on data collected from the Santa Barbara Channel.

In specific areas of interest, video mosaics can be generated from videos that often show transition between sandy and rocky seafloor. The mosaic is generated from seafloor video using software developed at the University of New Hampshire. Figure 11 is an example of video mosaic showing a transition between sediment-covered seafloor and rock outcrop.

Figure 12 shows an example of a recently collected high-resolution seismic-reflection profile collected by the USGS offshore of Point Sal. The profile shows a cross section of the earths crust down to about 240 meters. The dashed red lines show the Hosgri Fault Zone, part of a strike-slip fault system that extends for about 400 kilometers along the California coast from Point Arguello to Bolinas. The thin magenta lines show layers in sedimentary deposits that are flat northeast of the fault zone and folded southwest of the zone. The yellow layer at the top of the profile consists of unconsolidated sediment, about 17 meters thick, deposited in approximately the last 20,000 years after the last sea-level lowstand. The blue line is the seafloor "multiple," an echo of the seafloor.

Figure 13 shows an example of a deep-penetration multichannel seismic reflection profile collected offshore of San Mateo County, from the USGS National Archive of Marine Seismic Surveys (NAMSS). The profile shows a cross section of the earth's crust from the surface down to a depth of about 3 kilometers. The layers show sedimentary deposits that have been variably folded and truncated, deformation associated with the San Gregorio fault zone (faults shown by yellow lines). This data was collected in the 1970's when offshore California was considered a frontier petroleum province. 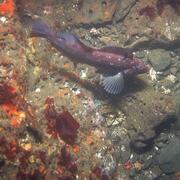 The California Seafloor Mapping Program (CSMP) is a cooperative program to create a comprehensive coastal and marine geologic and habitat base map series for all of California's State waters.
By
Coastal and Marine Hazards and Resources Program, Pacific Coastal and Marine Science Center
link
June 6, 2022

The California Seafloor Mapping Program (CSMP) is a cooperative program to create a comprehensive coastal and marine geologic and habitat base map series for all of California's State waters.
Learn More