WARC scientists are testing and developing methods for the isolation of cervid exosomes from blood samples, followed by microRNA extraction and next generation sequencing.

The Science Issue and Relevance: Chronic wasting disease (CWD) is a lethal, degenerative neuronal disease that affects a range of cervid species (e.g., deer, elk, and moose) in the United States. This project aims to enable managers and farmers to monitor both wild and domestic populations of cervids using minimally invasive blood draws as an alternative to current post-mortem diagnostics requiring brain or lymph tissue. This study uses modern methods developed in human prion disease research to potentially identify CWD biomarkers in deer blood, allowing for efficient diagnosis before symptoms are present. Early and effective detection of CWD will improve the quality of the wild population as a natural resource and reduce livestock loss from farmed herds. Further, the use of blood samples will reduce the processing effort and potential of human exposure to infected tissue.

Methodology for Addressing the Issue: MicroRNAs are short (~20 nucleotide), single-stranded, non-coding RNA molecules. This study seeks to characterize the microRNA profile in exosomes, which are small, cell-derived vesicles that contain RNA and proteins, and are a core component of cellular communication. In recent years, exosomes in blood have been identified as protective vesicles that enrich biomarkers. These biomarkers are typically found at limited levels in the blood when they are not concentrated in an exosome. WARC scientists are testing and developing methods for the isolation of cervid exosomes from blood samples, followed by microRNA extraction and next generation sequencing. This research will help determine the utility of exosomal microRNAs as biomarkers of CWD in deer.

Future Steps: Once the assay has been validated, and the microRNA sequencing performed, the microRNA profiles of non-infected “control” animals can be compared to those infected with CWD. Comparison of these two profiles may lead to the identification of biomarkers for CWD. From there, efforts can be focused on developing and validating targeted quantitative polymerase chain reaction (qPCR) assays to measure the expression levels of the microRNA biomarkers. Changes to the microRNA profiles in exosomes are hypothesized to occur early in infection. Should microRNAs prove effective biomarkers, and due to the sensitivity of qPCR assays, this approach to diagnostics has the potential to greatly improve disease surveillance and initiate a rapid response by management. 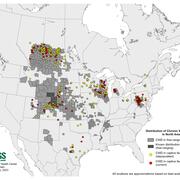 Chronic wasting disease (CWD) has been detected in 30 US states and four Canadian provinces in free-ranging cervids and/or commercial captive cervid facilities. CWD has been detected in free-ranging cervids in 29 states and three provinces and in captive cervid facilities in 18 states and three provinces.
By
Ecosystems, Biological Threats and Invasive Species Research Program, National Wildlife Health Center
link
January 26, 2023