For planning and management purposes, agencies require a web application that can locate, map, and monitor Southwestern Willow Flycatcher (flycatcher) breeding habitat across its range. The Habitat Viewer can identify potential flycatcher habitat and monitor changes caused by stressors, such as beetles, fire or drought.

The Southwestern Willow Flycatcher (Empidonax traillii extimus, hereinafter referred to as “flycatcher”) is a federally endangered species that occurs along rivers and streams in the Southwestern United States during May–September (U.S. Fish and Wildlife Service, 1995, 2002). Flycatcher breeding habitat is characterized by a mosaic of relatively dense tree and shrub growth, typically in association with surface water or saturated soil, interspersed with more open areas, open water, or shorter, sparser vegetation along rivers, streams, or other wetlands. Habitat loss and degradation are the main factors contributing to the decline of the species and the flycatcher recovery plan emphasizes the increase and improvement of breeding habitat through restoration of native breeding habitat and the management of exotic vegetation (U.S. Fish and Wildlife Service, 2002). The estimated rangewide breeding population of flycatchers as of the last compilation in 2007 was roughly 1,299 territories distributed among 288 known sites (Durst and others, 2008). In 2013, the U.S. Fish and Wildlife Service (FWS) designated revised critical habitat for the flycatcher under the Endangered Species Act (U.S. Fish and Wildlife Service, 2013). Hundreds of stream kilometers were designated as critical habitat, located in 6 states, 38 counties, 24 management units, and 6 recovery units. Identified by stream segment, the lateral extent includes riparian areas and streams in the 100-year floodplain (Fig. 1).

The Arizona Game and Fish Department developed a flycatcher remote sensing/geographic information system (GIS) habitat model (hereinafter referred to as the “satellite model”) that uses Landsat imagery and a 30-m-resolution digital elevation model (Hatten and Paradzick, 2003). The satellite model was developed with presence/absence survey data acquired along the San Pedro and Gila Rivers, and from Salt River and Tonto Creek inlets to Roosevelt Lake in southern Arizona. The satellite model uses a logistic regression equation to divide riparian vegetation into a continuous range of probabilities extending from almost 0 to 99 percent, with higher probabilities most likely to contain a flycatcher territory. The model has been successfully tested at multiple locations, including Alamo Lake, Arizona (Hatten and Paradzick, 2003), and the Rio Grande River, New Mexico (Hatten and Sogge, 2007). In each case, the satellite model performed within expectations by identifying riparian areas with the highest densities of flycatcher territories. Importantly, the satellite model explained 79 percent of the fluctuation in the flycatcher breeding population at Roosevelt Lake from 1996 to 2005 (Paxton and others, 2007; Hatten and others, 2010). Most recently, the satellite model was used to map predicted breeding habitat across the entire range of the flycatcher in the U.S. (Fig. 2), and to examine the effects of drought (Fig. 3).

Another application of the satellite model was an examination of the effects of tamarisk leaf beetles (Diorhabda spp.), which are affecting flycatcher breeding habitat throughout much of their range (Hatten, 2016). In 2001, tamarisk leaf beetles (hereinafter referred to as “beetle”) were released by the U.S. Department of Agriculture Animal and Plant Health Inspection Service (APHIS) at 10 sites in six States (California, Nevada, Utah, Colorado, Wyoming, and Texas) to control invasive tamarisk (Tamarix spp.) (Bean and others, 2013). Tamarisk, which is an introduced phreatophyte and a common nesting substrate for flycatchers and other birds (Sogge and others, 2008; Paxton and others, 2011), spread rapidly following its release over a century ago and is now a dominant riparian species throughout the West (Chew, 2013). Feeding by the beetle larvae defoliates the tamarisk during the growing season and reduces plant vigor, sometimes resulting in plant mortality within 5 years (Hultine and others, 2009, 2015). Since their introduction, beetles have spread naturally into most drainages of the upper Colorado River Basin (Jamison and others, 2015), southern Utah and Nevada, and the main stem lower Colorado River in Arizona (Fig. 4). The satellite model was used to identify areas along the Virgin River that were heavily impacted by the beetle (Fig 5), and to simulate what may occur should the beetle arrive along focal river reaches, such as the upper Gila River (Fig. 6).

The FWS and APHIS requested a web application that can locate, map, and monitor potential flycatcher breeding habitat throughout its range, including areas not designated as critical habitat. Most flycatcher habitat is inherently dynamic, with individual riparian patches subject to cycles of creation, growth, and loss because of drought, flooding, fire, and other disturbances. Former breeding patches can lose suitability quickly, whereas new habitat can develop in a few years, especially in reservoir drawdown zones (Paxton and others, 2007). Because the distribution and extent of flycatcher breeding habitat changes over time, an accurate understanding and assessment of current habitat suitability requires up-to-date information on vegetation characteristics and other variables associated with occupied sites. This web mapping application (Southwestern Willow Flycatcher Habitat Viewer) was developed to meet the needs of government and nongovernmental organizations by providing maps of predicted flycatcher breeding habitat throughout their range. 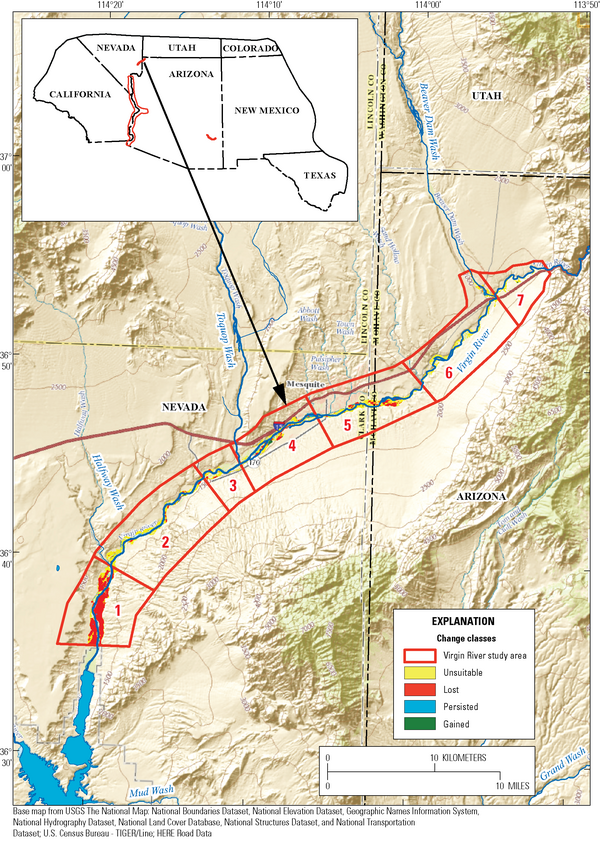 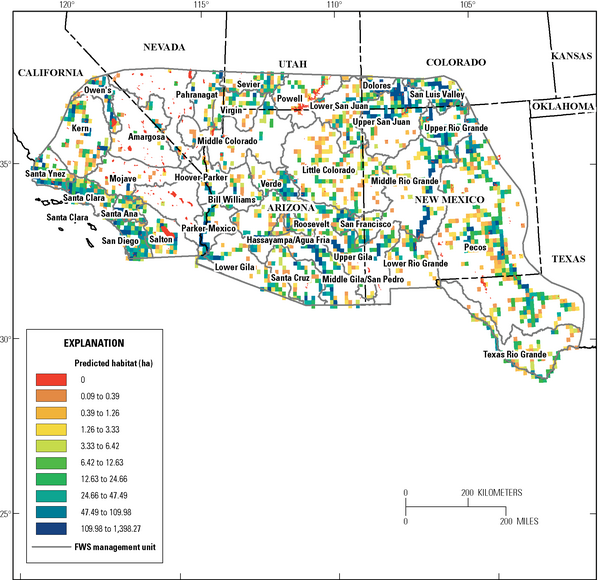 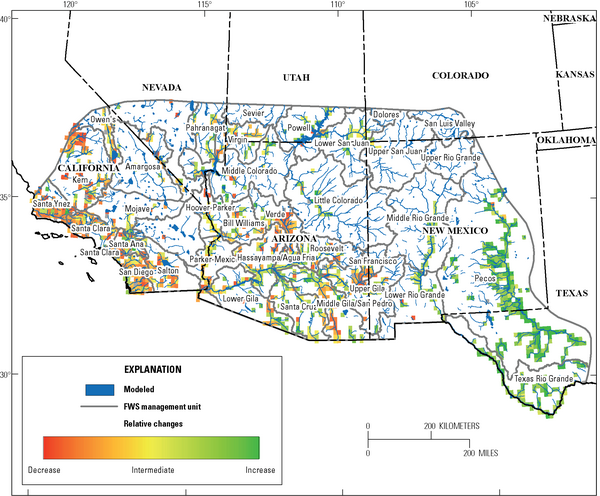 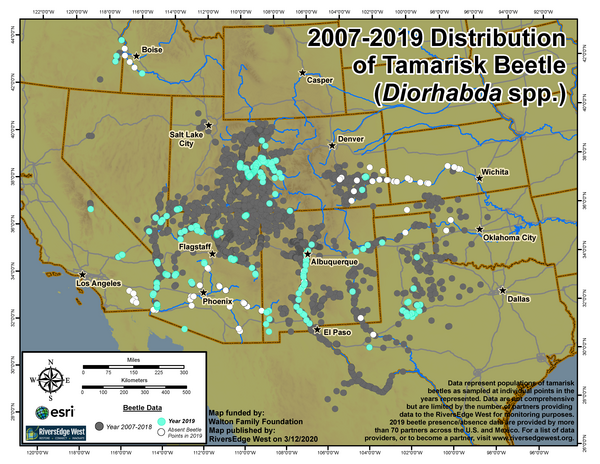 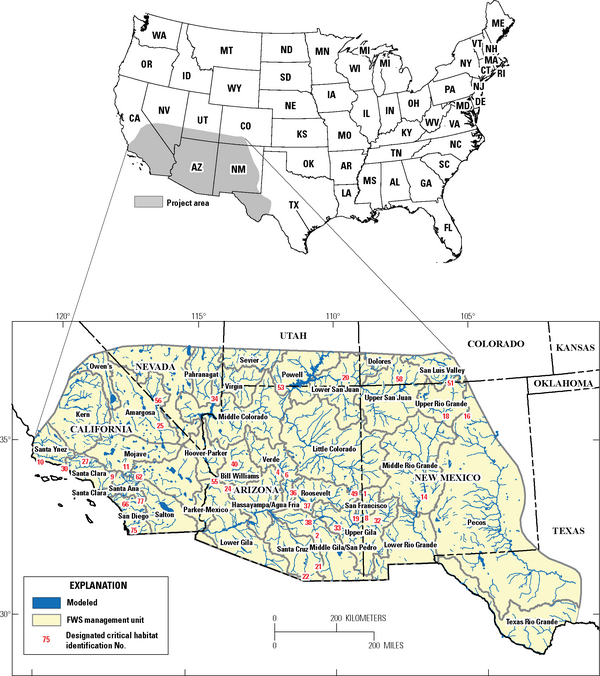 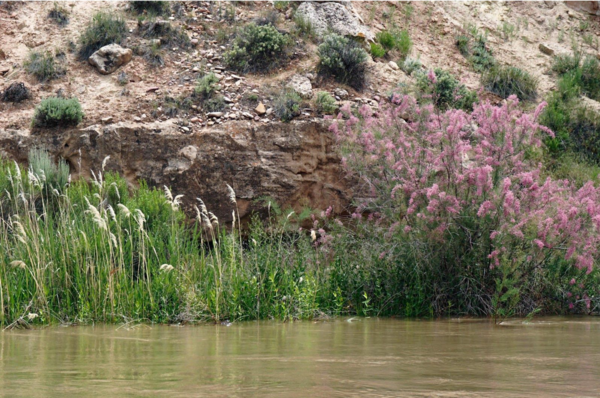 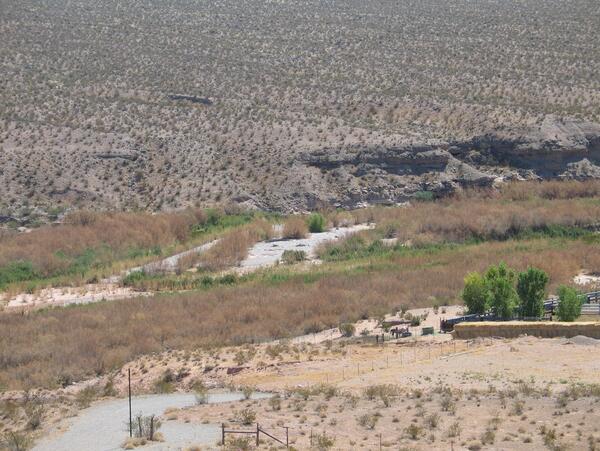 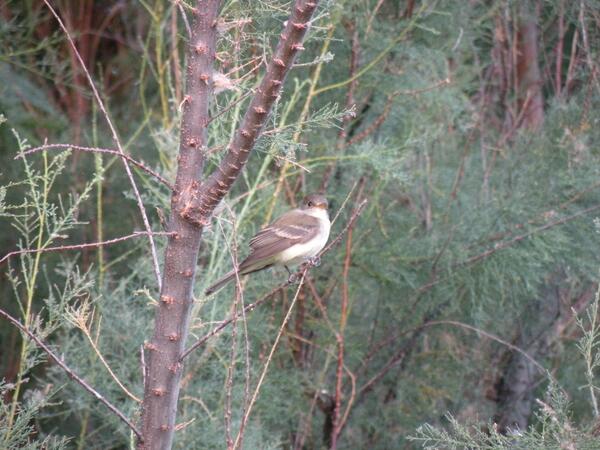 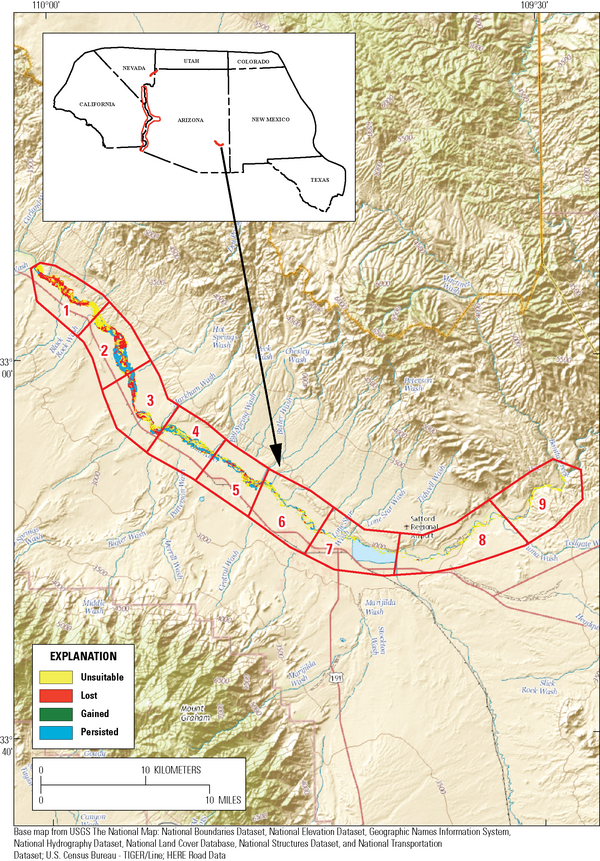 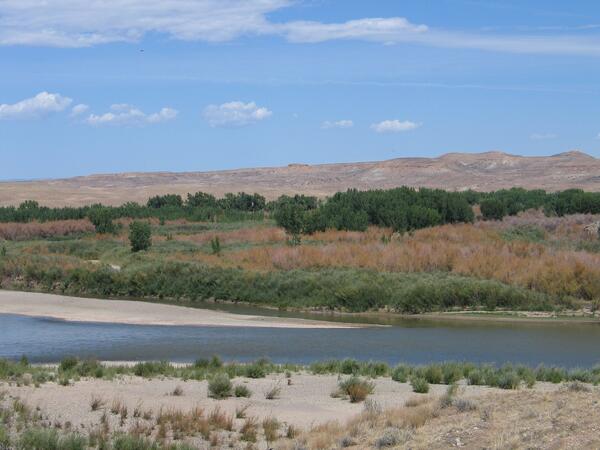 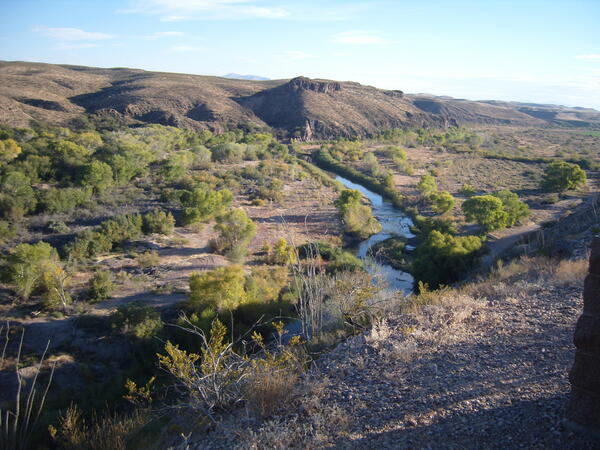 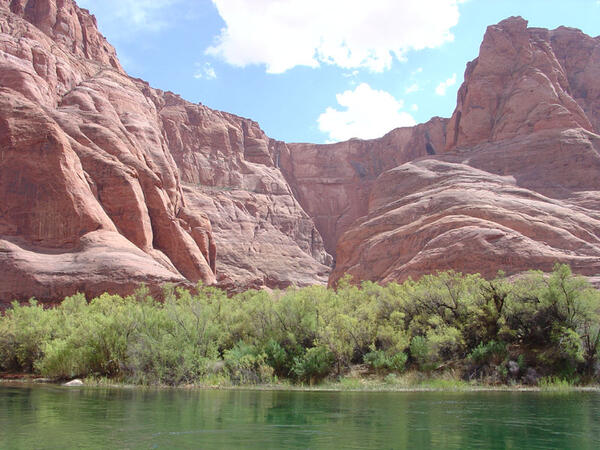 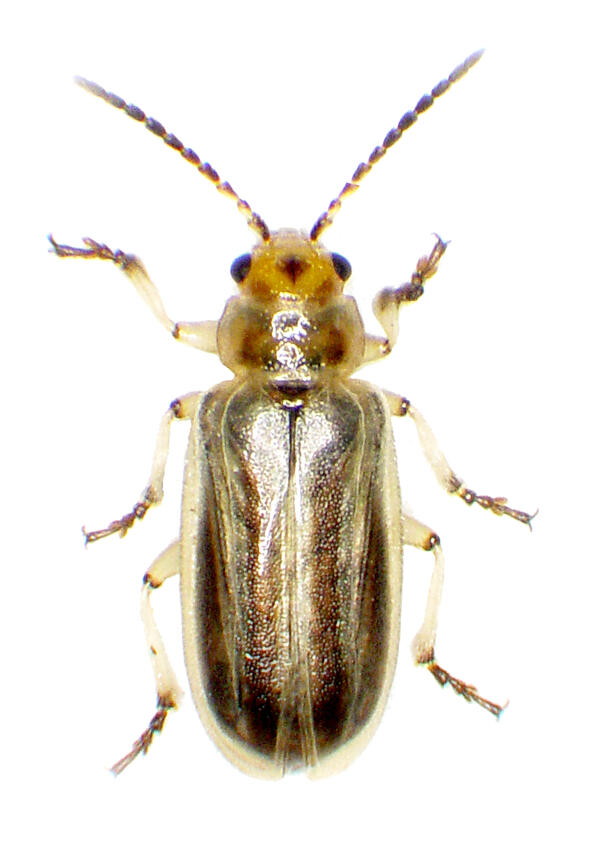 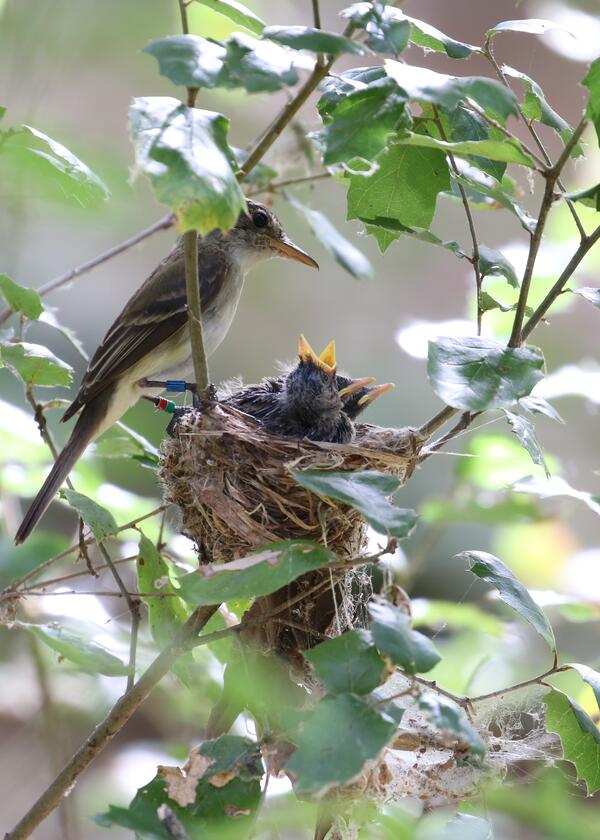 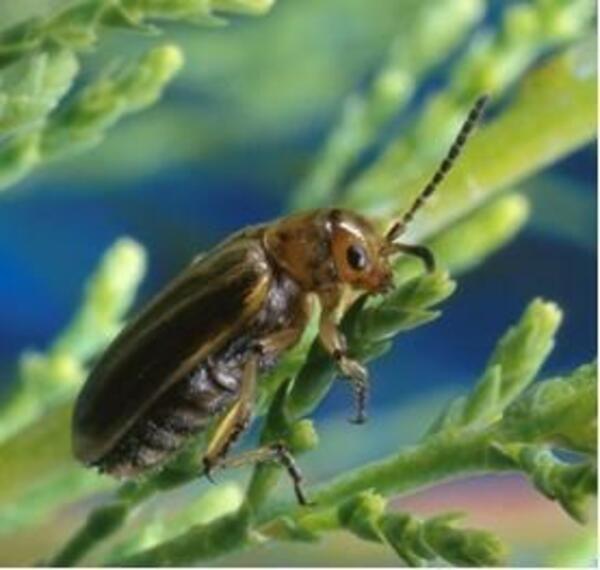 BACKGROUND From 1996 to 2005, the U.S. Geological Survey (USGS) conducted a demographic study of the Southwestern Willow Flycatcher (Empidonax traillii extimus) in Arizona in collaboration with the Arizona Game and Fish Department (AGFD). The study was begun the year following the listing of the Southwestern Willow Flycatcher as an endangered species. At the time of the listing, very little was k
By
Ecosystems, Fisheries Program (unpublished), Southwest Biological Science Center, Western Fisheries Research Center
July 20, 2007

The southwestern willow flycatcher (SWFL; Empidonax traillii extimus) is an endangered songbird whose habitat has declined dramatically over the last century. Understanding habitat selection patterns and the ability to identify potential breeding areas for the SWFL is crucial to the management and conservation of this species. We developed a multiscaled model of SWTL breeding habitat with a Geogra
By
Ecosystems, Wildlife Program (unpublished), Fisheries Program (unpublished), Western Fisheries Research Center

The Flycatcher Habitat Viewer was developed to meet the needs of organizations by providing maps of predicted flycatcher breeding habitat throughout its range. Maps are provided from 2013 to present and cover 57 satellite scenes. Maps identify predicted flycatcher habitat based upon the amount of green vegetation within a 120-m radius of each cell, and the size of floodplain within a 360-m radius.