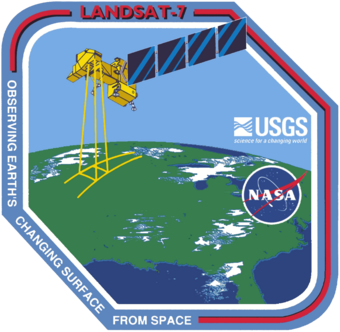 Since launch, Landsat 7 has completed over 106,000 Earth orbits, traveled almost 3 billion miles, and contributed over 2.6 million scenes to the USGS Landsat archive. Since 1972, the Landsat program has played a critical role of repeat global observations for monitoring, understanding, and helping manage Earth's natural resources. Landsat 7 has contributed to almost half of the 46-year Landsat record, providing a unique resource for those who work in agriculture, geology, forestry, regional planning, education, mapping, emergency response, and global change.

Landsat 7 carries the Enhanced Thematic Mapper Plus (ETM+) instrument, an improved version of the Thematic Mapper (TM) instruments that were onboard Landsat 4 and Landsat 5. Two other primary improvements with Landsat 7 ETM+ are the 15-meter (m) panchromatic band and a thermal infrared (TIR) channel with a four-fold (60 m) improvement in spatial resolution over the TIR channel on Landsat 4 and Landsat 5 instruments.

On May 31, 2003, the Scan Line Corrector (SLC), which compensates for the forward motion of the satellite, failed. Subsequent efforts to recover the SLC were not successful, and the failure has remained permanent. Without an operating SLC, the sensor’s line of sight traces a zig-zag pattern along the satellite ground track. As a result, the imaged area is duplicated, with a width that increases toward the edge of the scene. However, engineers & scientists developed a solution so that when the Level-1 data are processed, the duplicated areas are removed, leaving data gaps. Although these scenes have 78 percent of their pixels remaining after the duplicated areas are removed, these data are still some of the most geometrically and radiometrically accurate of all civilian satellite data in the world and are still valuable to the user community.

On February 7, 2017, Landsat 7’s Flight Operations Team sent the twentieth and final Delta-I (inclination) maneuver command to the spacecraft. Delta-I maneuvers keep Landsat 7 in the correct orbit to ensure that the satellite always crosses the equator at 10 a.m. plus-or-minus 15 minutes local time.  The maneuver was executed exactly as intended. Landsat 7 reached its peak outermost boundary of 10:14:58 local time on August 11, 2017. The satellite will continue to drift in its inclination over the next two years, with the equatorial crossing falling back to 9:15 by early 2020.

Pushing the Landsat 7 time threshold to 9:15 A.M. gives Landsat 9 a launch window until the middle of 2021. Beyond that, Landsat 7 spacecraft’s science data will no longer be valid, and its science mission will likely end.

We invite you to follow #L7Turns20 on @USGSLandsat and @NASA_Landsat Twitter all this week as we share fun facts, videos and images acquired by Landsat 7 over the last twenty years. We also encourage you to share your Landsat 7 application stories using #L7Turns20.

Visit the USGS Landsat 7 web page for more information about the mission, available data products, and what its future plans are.  All Landsat data products are available for download from the USGS Earth Resources Observation and Science Center via the following data portals: EarthExplorer, GloVis, and LandsatLook Viewer at no charge.