Did you know that earthquakes can cause changes in groundwater levels? Very large earthquakes can even cause water-level fluctuations in some wells thousands of miles away, depending on the local geological conditions around the well.

How do earthquakes affect groundwater levels?

Step changes in groundwater levels occur 'near field' of an earthquake because the earthquake subjects the earth's crust, including its aquifer systems, to stress and permanent strain (deformation). This deformation process results in altered fluid pressure within the aquifer systems, and consequently, a step-like change in water level would be expected. Changes can be up or down, because the stress and strain effects on the system vary. For upward steps in shallow wells, compaction of overlying sediments may raise the groundwater level. Alternately, in a fractured rock aquifer, the fractures providing water to the well may be widened, unclogged, or sealed by the wave train of an earthquake. New water-bearing fractures may even be created. Water levels in these systems can permanently increase or decrease as a result.

Changes in groundwater hydrographs after an earthquake

Over time, USGS has observed a network of groundwater wells monitored by USGS and cooperating agencies where water-level changes have been observed after large earthquakes around the world. Not all wells show water-level changes after every quake, and the response can vary from well to well. A graph of groundwater levels over time is called a hydrograph. In the event of a large earthquake, users can view the real-time hydrographs for some of these wells through the USGS National Water Information System (NWIS).

A USGS groundwater monitoring site in Christiansburg, Montgomery County, Virginia, is well known to display water-level fluctuations as a result of large earthquakes worldwide. Observation well 27F2 SOW 019 is sensitive to teleseismic waves generated by large earthquakes (usually greater than magnitude 6.0) that occur around the world. This well is 450 feet deep, finished in carbonate rocks of the Elbrook Formation, and water enters the well via fractures or cracks in the rock. Compression and expansion of these fractures by seismic waves cause the water to be drawn in and out of the well, similar to the way bellows work.  As groundwater moves in and out of the well, the water level in the well rapidly rises and falls. This water-level oscillation is recorded at 5-minute intervals by a pressure transducer and data logger maintained by the Virginia Department of Environmental Quality.  Every hour, these data are transmitted via satellite to a computer located at the U.S. Geological Survey Virginia Water Science Center in Richmond, Va.

By comparing the water-level response at these two sites to a large earthquake in Alaska on January 23, 2018, we can observe and study the relationship between groundwater levels and earthquakes.

A magnitude 7.9 earthquake occurred at 12:32 am Alaska time (09:32 UTC) on January 23, 2018, at a depth of about 8.76 miles (14.1 kilometers) beneath the Gulf of Alaska. Hydrographs indicating possible groundwater-level changes due to this earthquake are shown below. These provisional data are presented in a combined, simplified figure to highlight the observed change in water levels associated with the earthquake. Note that water levels have not been corrected for barometric pressure and Earth tide affects.

A magnitude 5.8 (Mw) earthquake occurred at 1:51 pm EDT (17:51 UTC) on August 23, 2011, at a depth of about 3.7 miles (6 kilometers) beneath the town of Mineral, Virginia, located approximately 27 miles (45 km) east of Charlottesville. The event is among the largest earthquakes recorded in the eastern United States. Sample hydrographs have been selected from USGS wells as examples of the response of measured groundwater levels to the August 2011 earthquake.

The maximum water level change recorded in the USGS real-time groundwater network due to the 2011 Virginia earthquake was approximately two feet at the NP 820 Northampton County Observation Well in Pennsylvania. Most observed water-level changes were less than 0.5 feet.

The six hydrographs below present groundwater levels measured in selected wells monitored by the USGS. The hydrographs presented here are produced from wells with near real-time instrumentation. These graphs were selected as examples of locations where measured groundwater levels responded to the August 23, 2011, Virginia earthquake. The red arrow indicates the approximate time of the mainshock of the earthquake near Mineral, Virginia.

Below are other science projects associated with the effect of earthquakes on wells, streams, and springs. 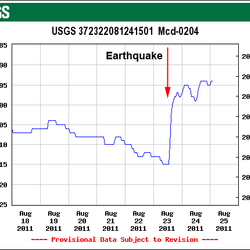 A magnitude 5.8 (Mw) earthquake occurred at 1:51 pm EDT (17:51 UTC) on August 23, 2011, at a depth of about 3.7 miles (6 kilometers) beneath the town of Mineral, Virginia, located approximately 27 miles (45 kilometers) east of Charlottesville. The event is among the largest earthquakes recorded in the eastern United States.
By
Water Resources
link
February 23, 2019

A magnitude 5.8 (Mw) earthquake occurred at 1:51 pm EDT (17:51 UTC) on August 23, 2011, at a depth of about 3.7 miles (6 kilometers) beneath the town of Mineral, Virginia, located approximately 27 miles (45 kilometers) east of Charlottesville. The event is among the largest earthquakes recorded in the eastern United States.
Learn More

Below are data or web applications associated with the effect of earthquakes on wells, streams, and springs.

USGS Groundwater Data for the Nation

Data from wells, springs, test holes, tunnels, drains, and excavations across the U.S.; well location data includes information such as latitude and longitude, well depth, and aquifer. Groundwater level data are collected and stored as either discrete field-water-level measurements or as continuous time-series data from automated recorders.

Below are publications associated with the effect of earthquakes on wells, streams, and springs.

Hydrogeologic responses to earthquakes have been known for decades, and have occurred both close to, and thousands of miles from earthquake epicenters. Water wells have become turbid, dry or begun flowing, discharge of springs and ground water to streams has increased and new springs have formed, and well and surface-water quality have become degraded as a result of earthquakes. Earthquakes affect
By
Water Resources, Groundwater and Streamflow Information Program, California Water Science Center, Ohio-Kentucky-Indiana Water Science Center

Below are data or web applications associated with the effect of earthquakes on wells, streams, and springs.